According to Stavros Stavrides, an alternative model to the modern city of urban enclaves is a city of thresholds. These thresholds, “possess power to mediate actions that open spatially as well as socially fixed identities and encourage chance encounters” (Stavrides, 2007).

The aim of this urban design project is to explore how physical thresholds mediate social conditions at the scale of a city centre neighbourhood. Thresholds, connect one space to another, as a mode of transition within the urban fabric and interlink between public and private. These in-between spaces at the intersection of two realms signal invitation or act as a barrier and each with their own physical identity.

Cowcaddens, a neighbourhood located within the city centre, yet segregated by elevated roads and unwelcoming ground floor car park underneath the modernist housing estate’s pilotis, presents a Glasgow specific issue of disintegration of the urban fabric as a result of post-war development. The area that suffers from vacancy and alienation, resembling a stalled industrial quarter, asks for interventions that would unite the neighbourhood with the rest of the city centre. To address this challenge, the concept of thresholds is applied, setting up the research question: Can concept of thresholds be explored on the scale of a neighbourhood and become a tool to determine and replace physical and social boundaries? 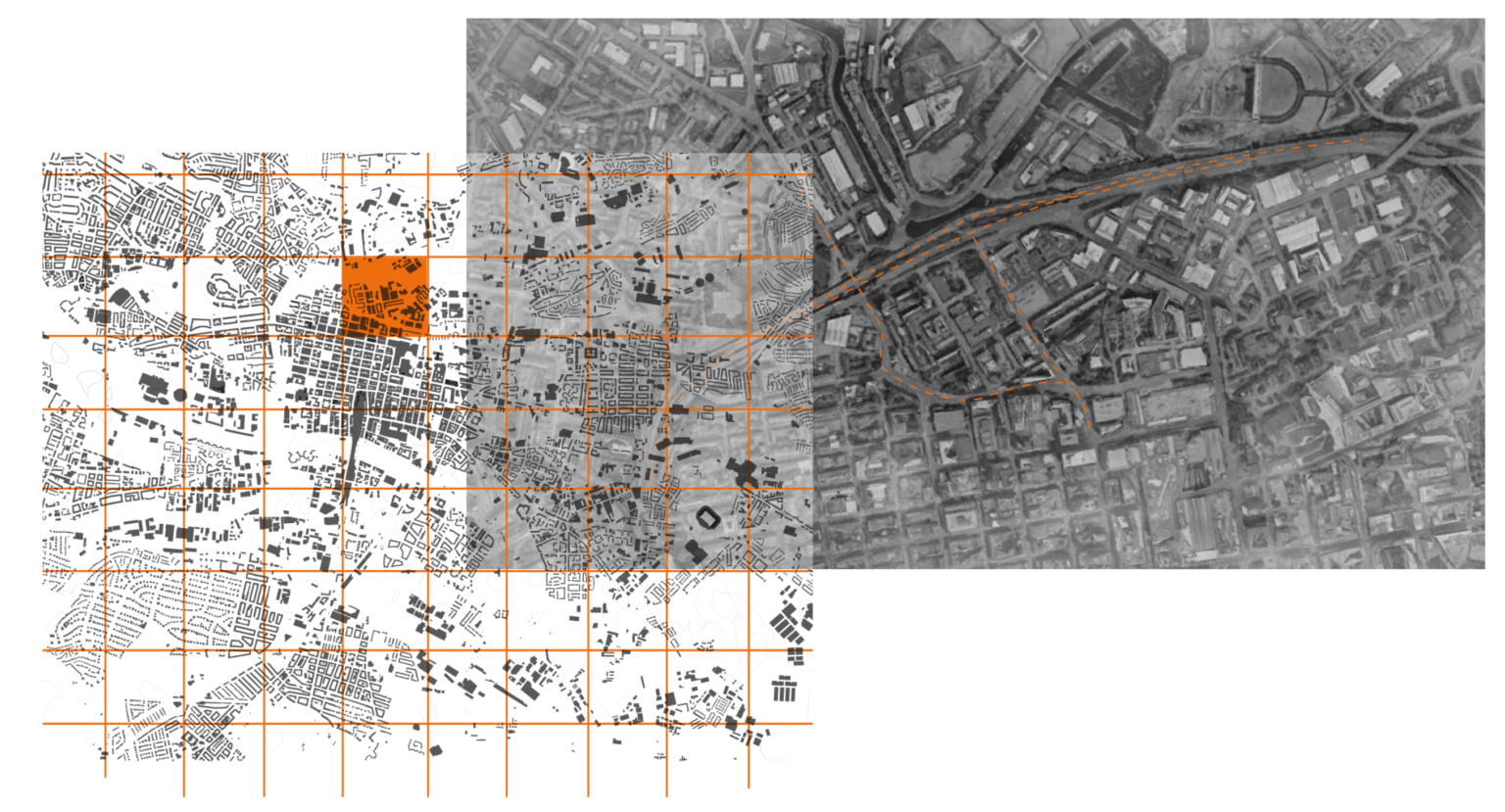 1 of 18
Previous Next
Close 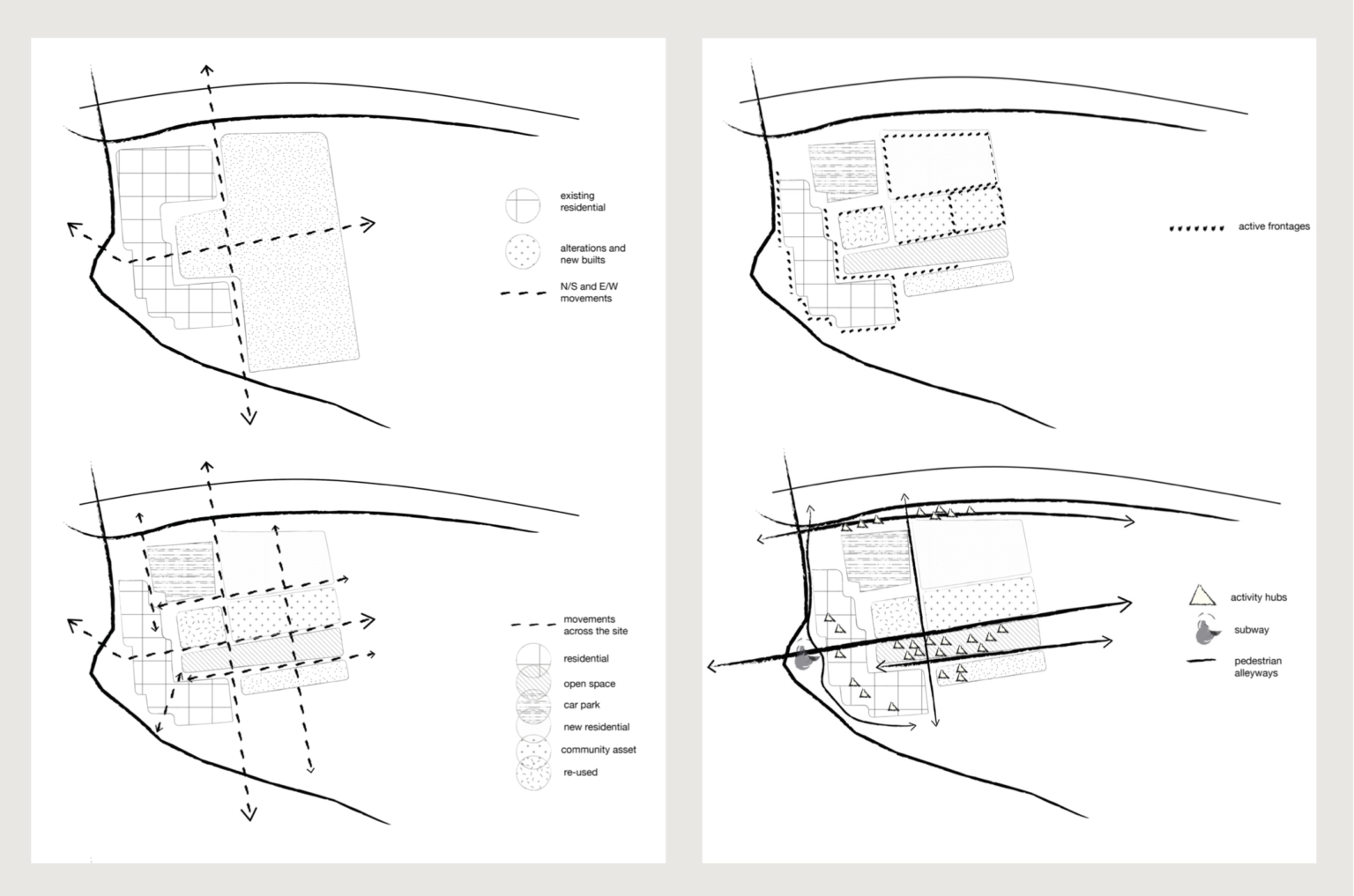 Proposal aims to integrate Cowcaddens within the rest of the city, create axial routes expanding towards the central grid and city wide proposals, suggest increase in active frontages and activity hubs.
2 of 18
Previous Next
Close

To answer the research question, this design proposes five sets of interventions, each of which can be recognised as an invitation of threshold spaces to connect currently fragmented urban fabric. Identifying the relationship between public and private as a tool to speak about thresholds, particular attention is given to discuss how different arrangements intervene with qualities of thresholds such as, for example, passing through communal to public. The discussion around the relationship of realms also targets the aspect of social boundaries, aiming to create an adequate hierarchy of private and public spaces that would avoid possible exclusion. Finally, current alienation is targeted by the arrangement of the urban fabric to create space for community engagement proposing invitation of activities through the adaptive re-use projects.
3 of 18
Previous Next
Close 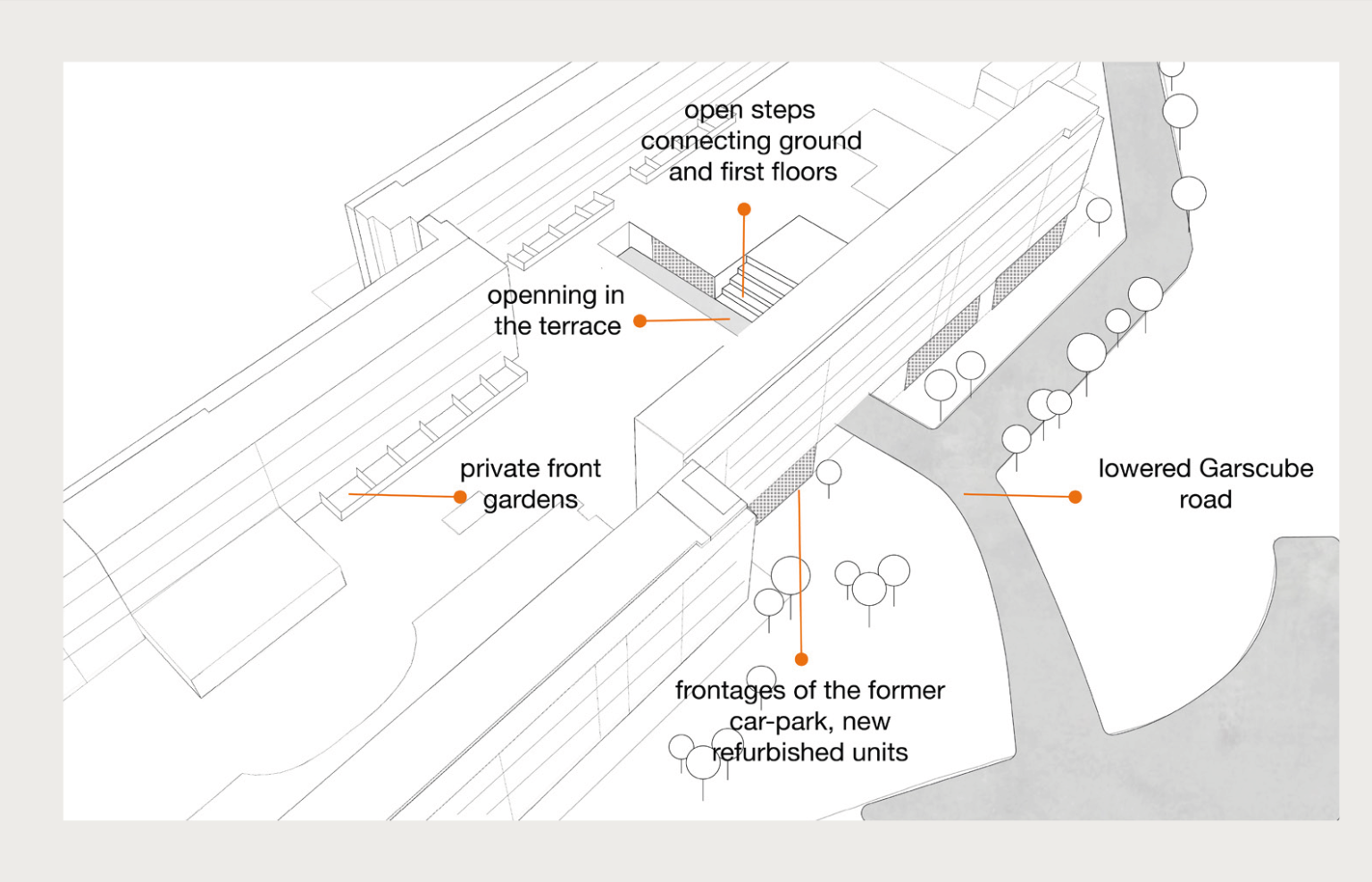 While redeveloping unutilised areas, design is focusing on learning from existing fabric and its historical development. The existing estate that follows modernist traditions offers a significant example of mediation between private and public through elevated walkways and communal space that can be carried forward as a lesson to learn. Introduction of private gardens and direct connection to the ground floor that is open to public, introduces new realms and thresholds between them.
4 of 18
Previous Next
Close 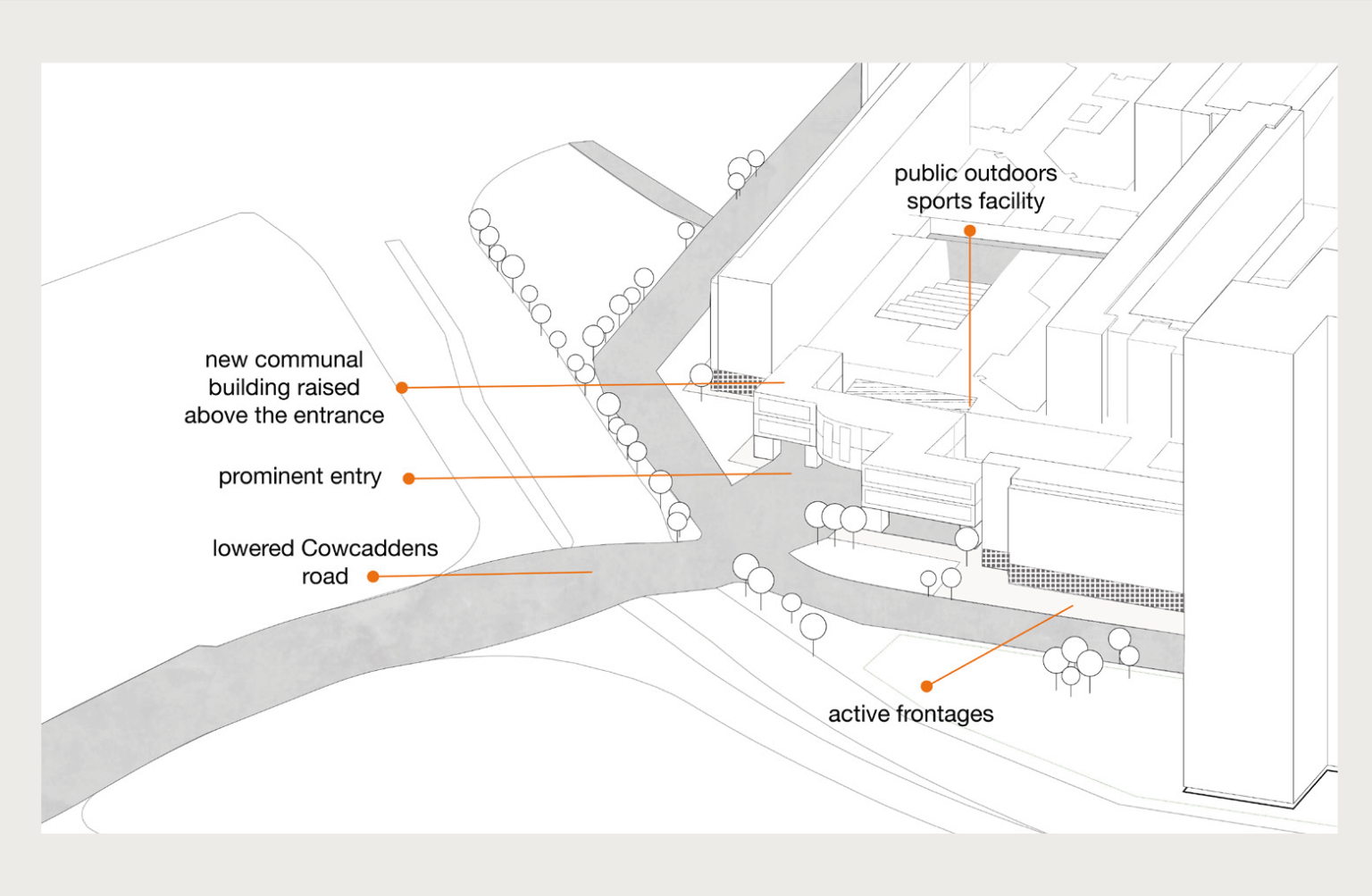 5 of 18
Previous Next
Close 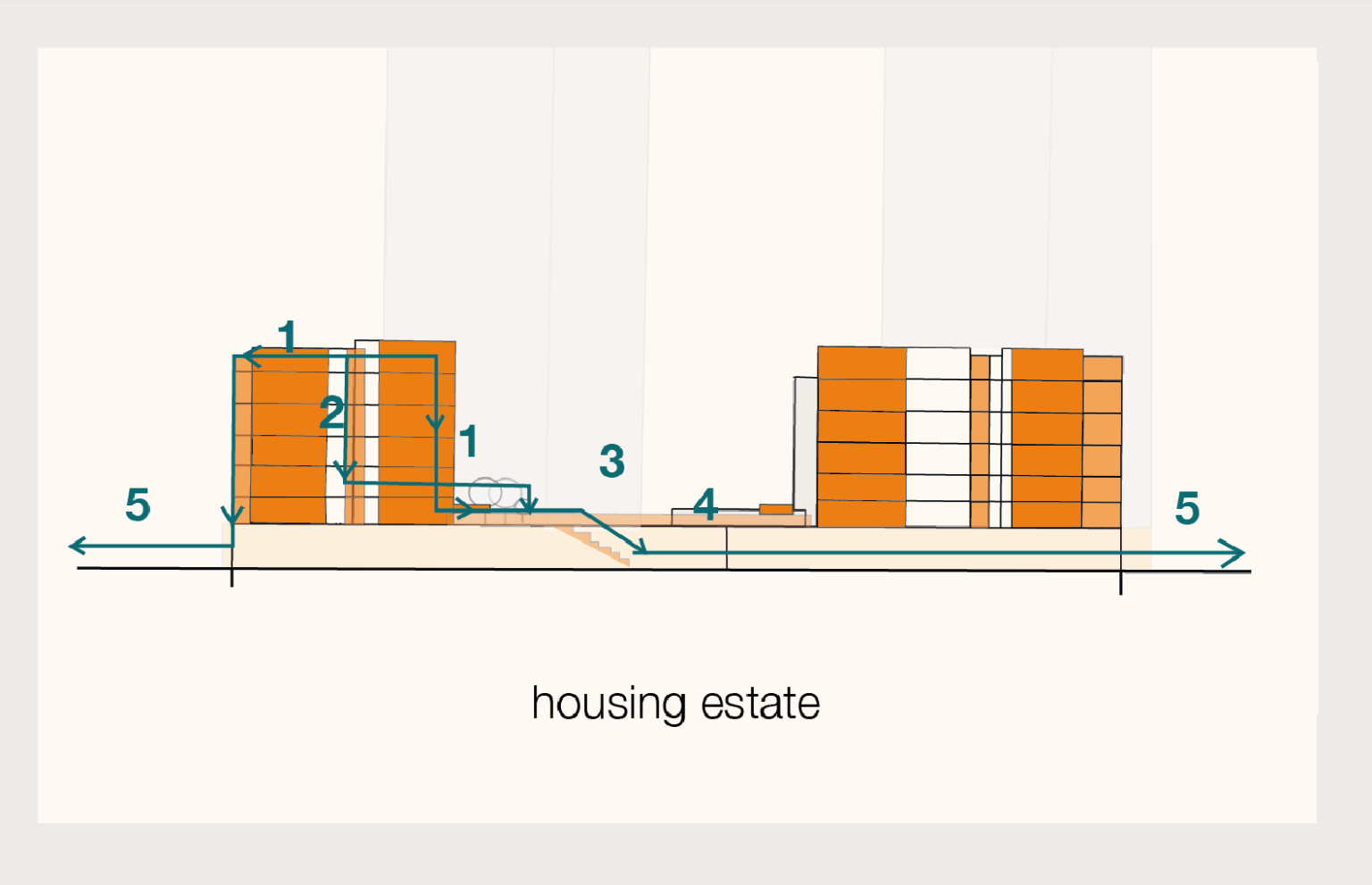 thresholds of the Housing Estate

Thresholds are perceived as a space of transition, locations in the constant mode of passing through, thus the design starts off from this perspective aiming to redesign current spaces in-between, bring in the identity and fill up Cowcaddens with a set of thresholds focused on public and communal activities.
6 of 18
Previous Next
Close 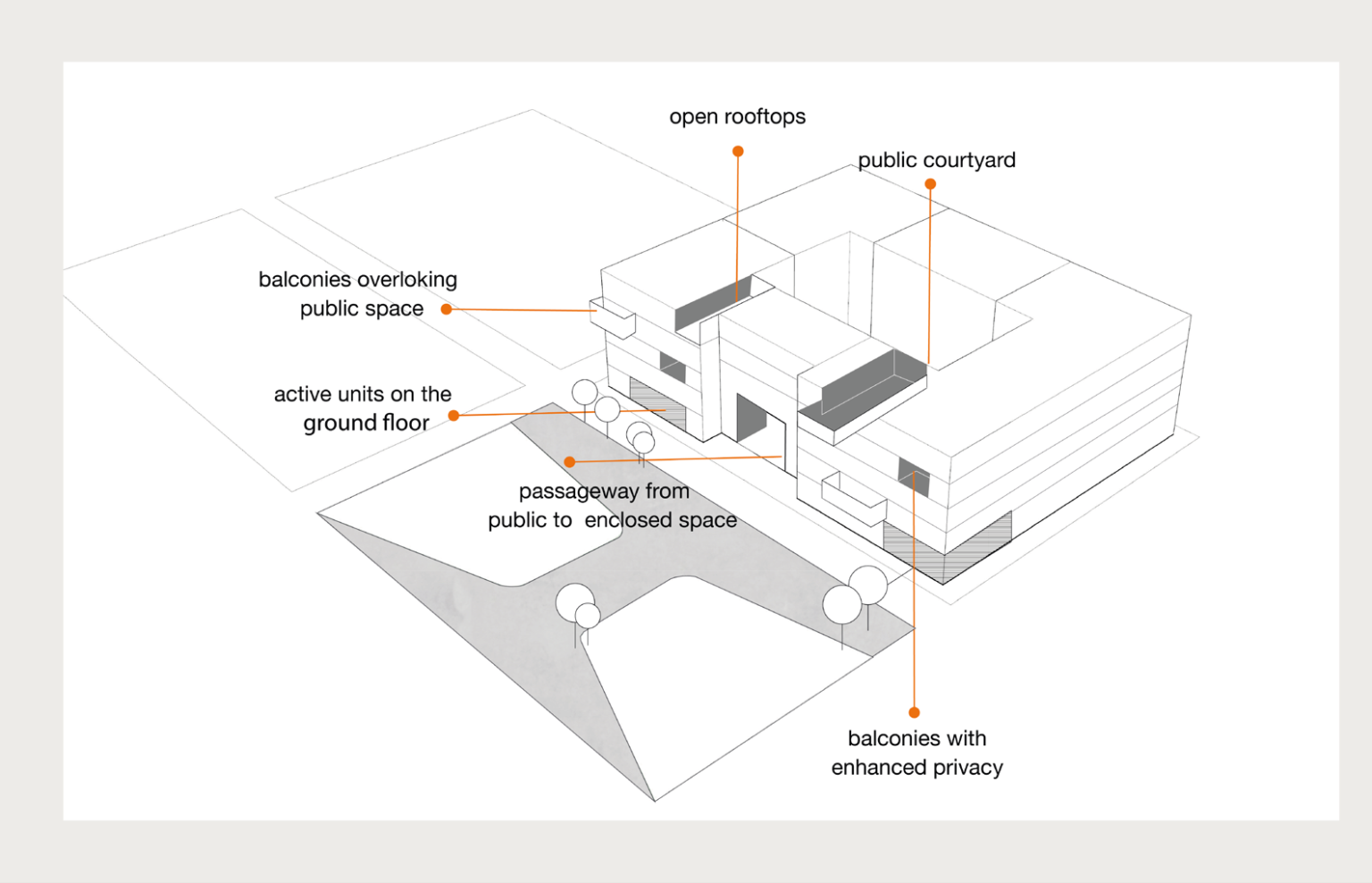 For the development of new blocks, the key task of the proposal is to elaborate on the definition of private and public and suggest that the presence of thresholds between these two realms contribute to a more porous, accessible design. The discussion of public and private starts with exploration and analysis of residential complexes, discussing spaces that go up in hierarchy from entirely private to enclosed communal and completely public.
7 of 18
Previous Next
Close 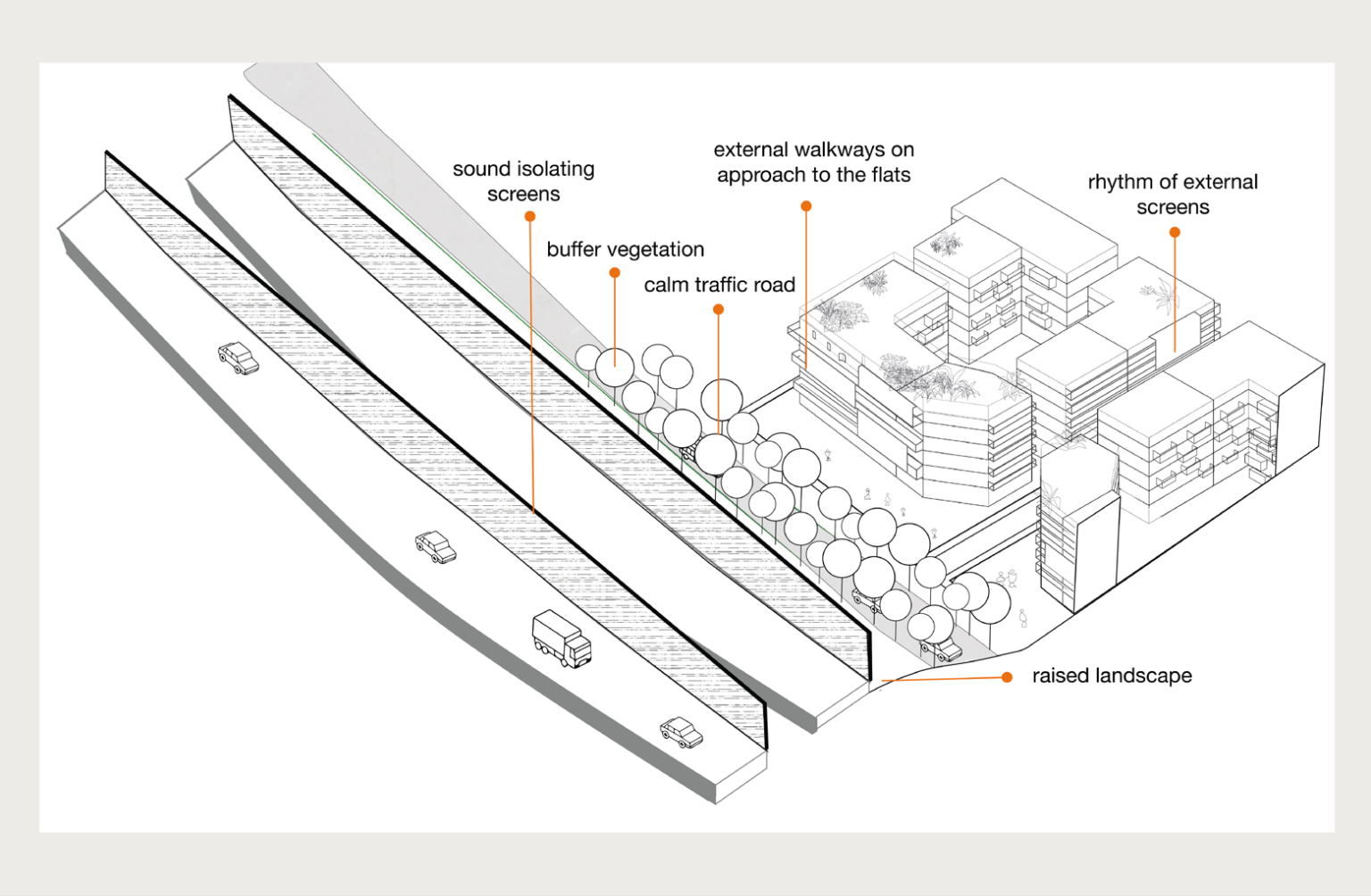 8 of 18
Previous Next
Close 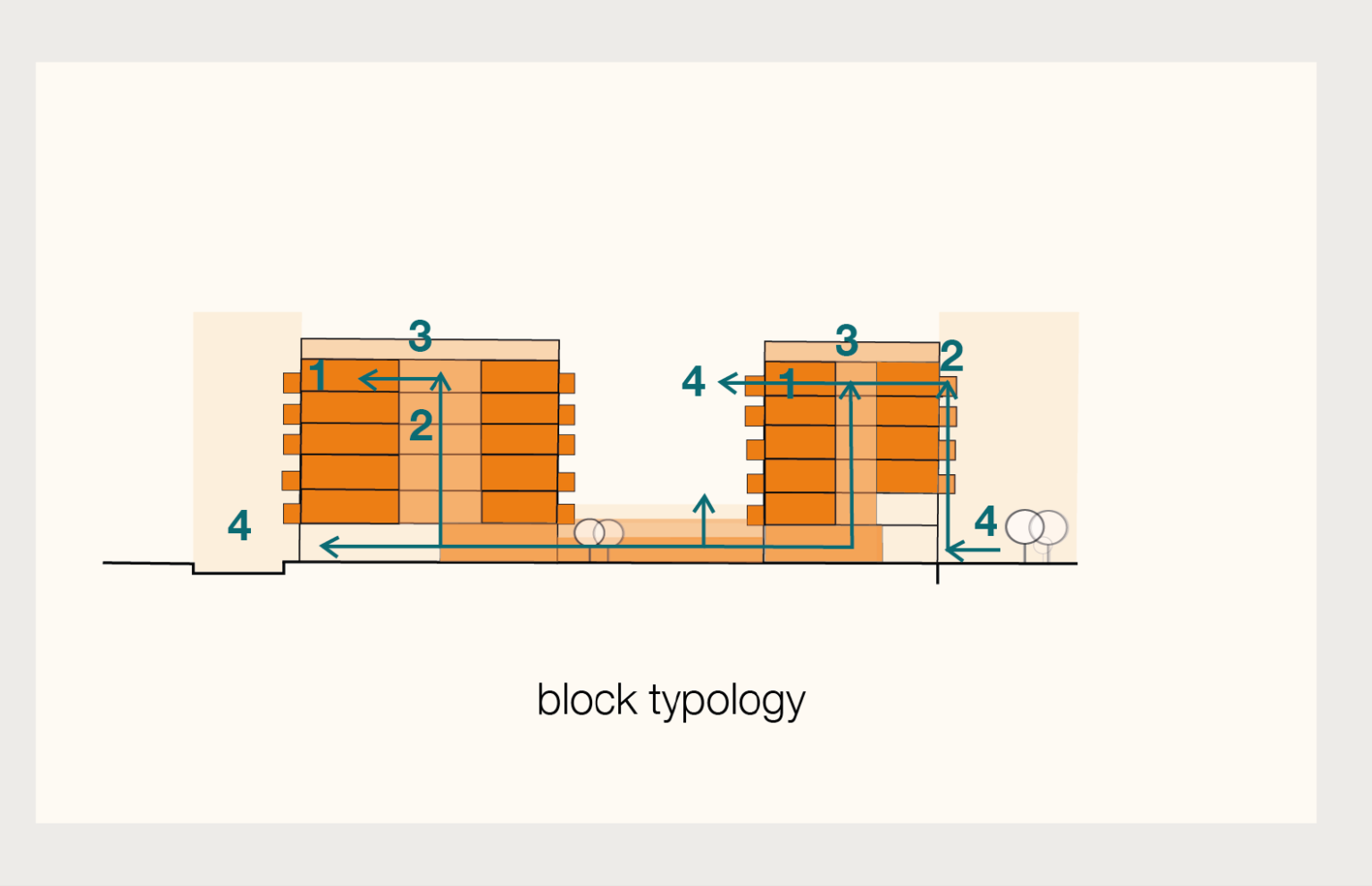 9 of 18
Previous Next
Close 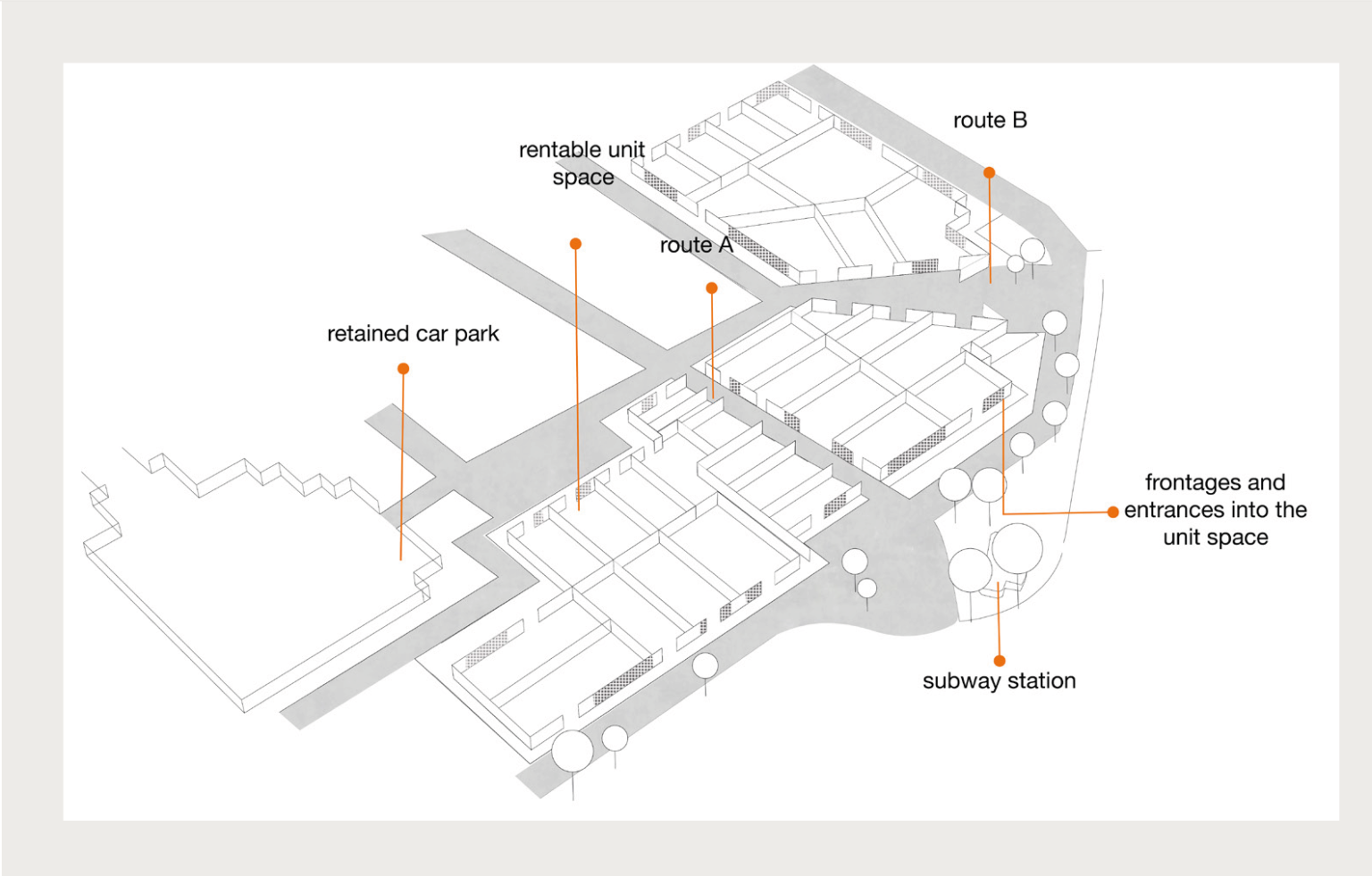 Current lack of identity within the Cowcaddens has to be challenged by developing links with external communities through the delivery of public programmes that would encourage recognition of the neighbourhood within the city. To tackle this issue yet benefit the development of urban fabric, adaptive re-use through public participation is introduced. Currently unaccessible Police and Fire stations and undercroft car park are suggested to be allocated for public use via the community asset programme. Apart from addressing thresholds through the design elements, allocated space for participation can be treated as a social threshold, a programme that promotes flow into the site by means of established identity.
10 of 18
Previous Next
Close 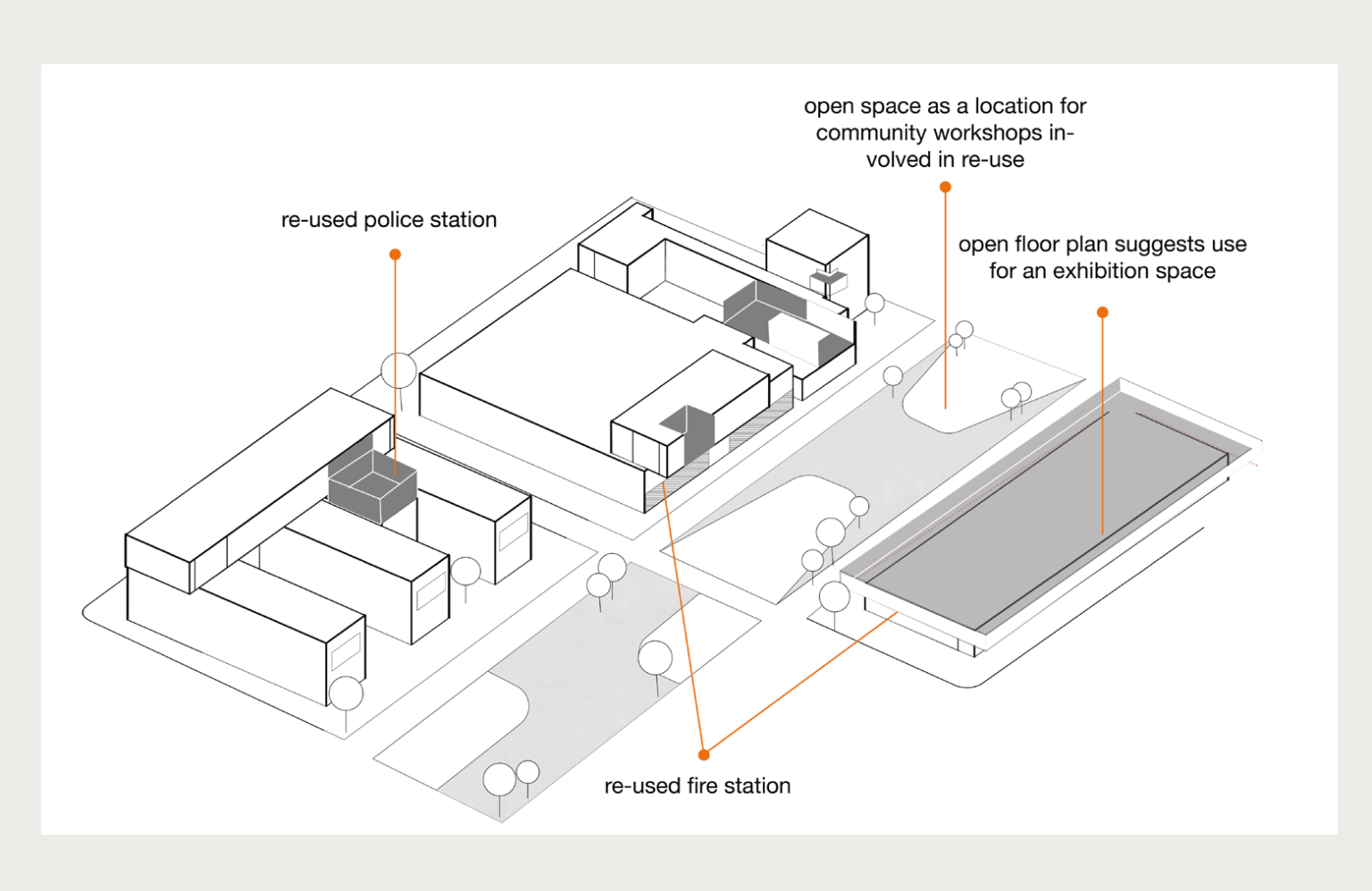 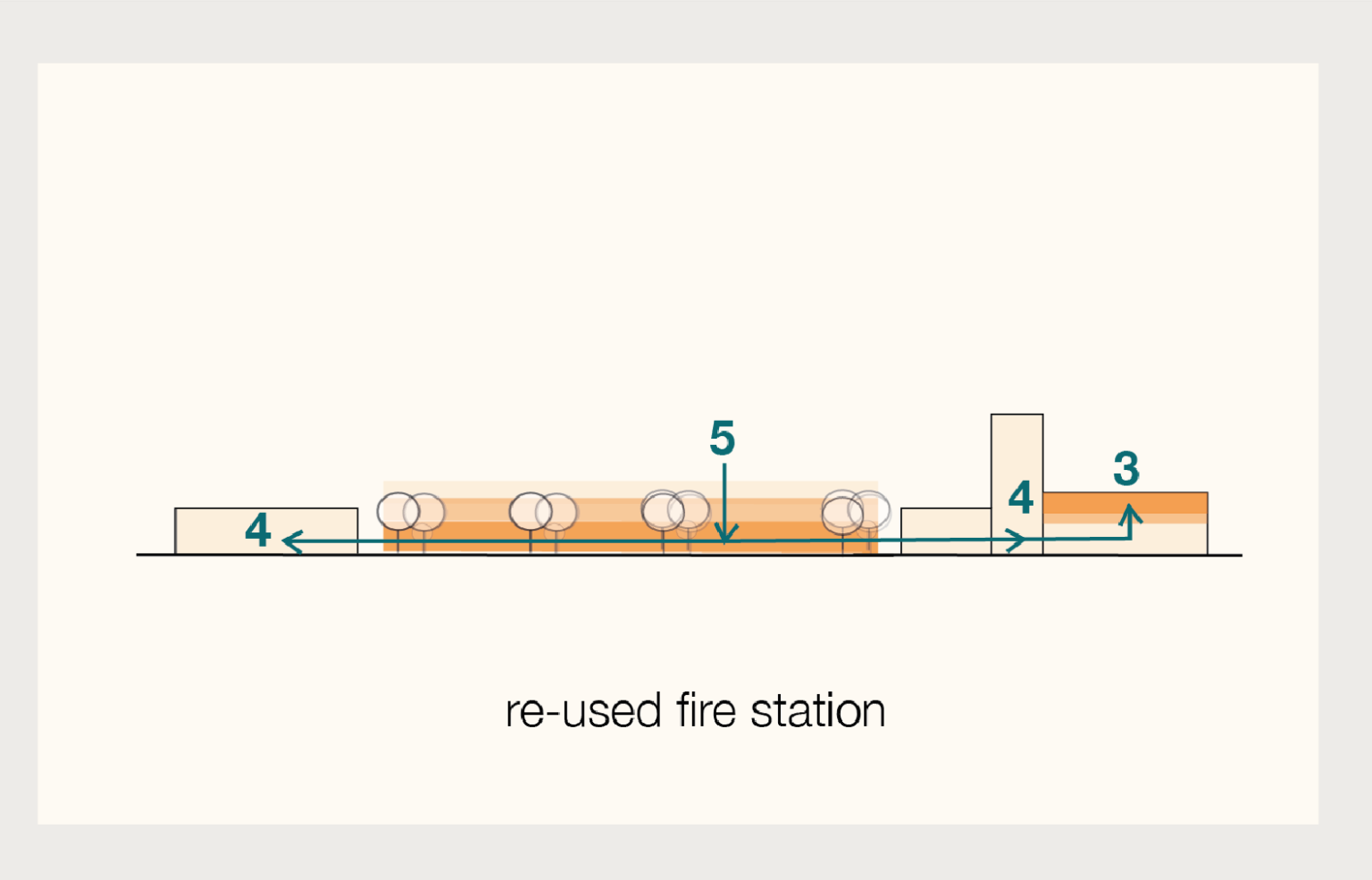 thresholds of the fire station 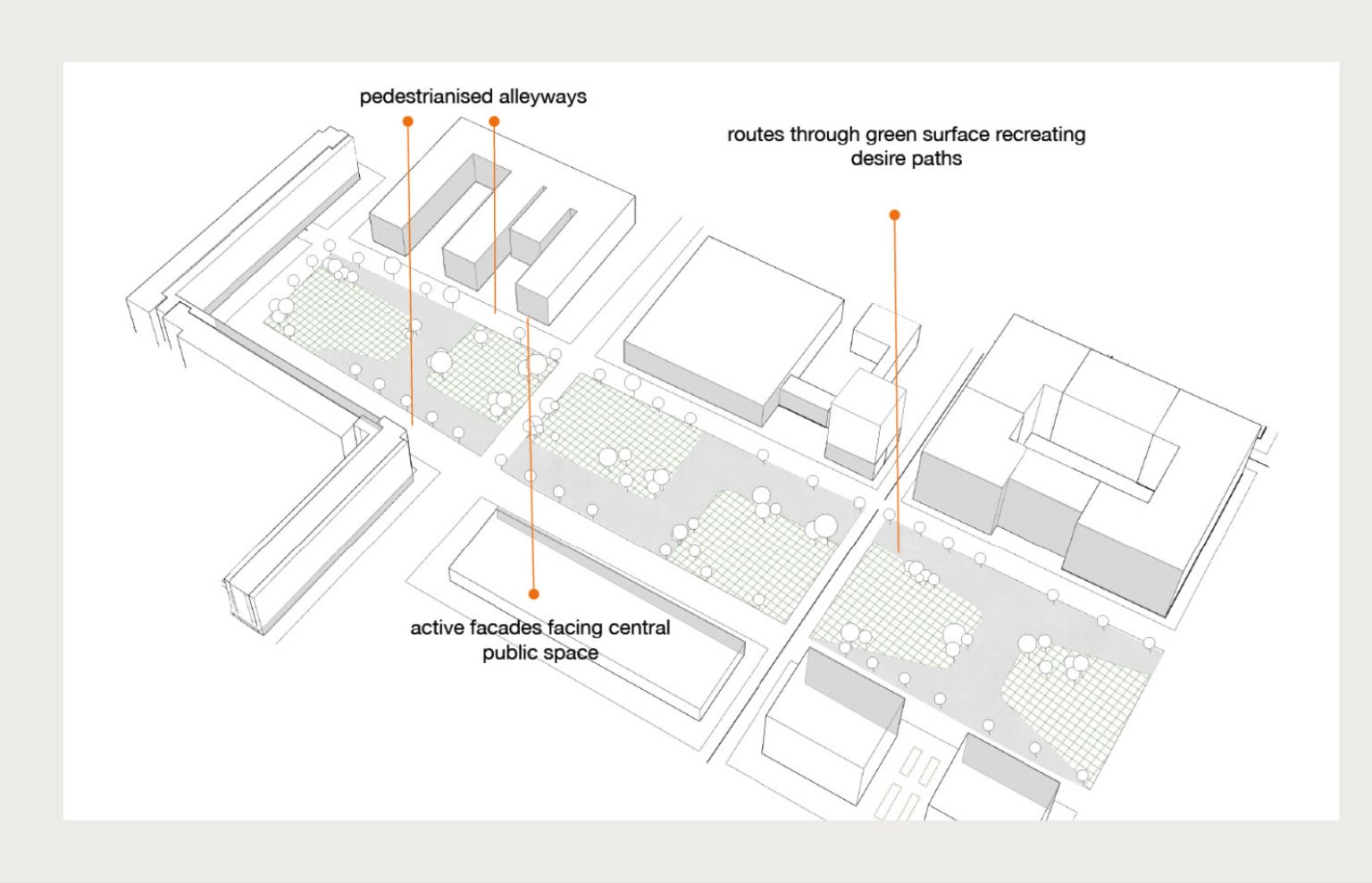 Central Park is proposed as a core of the area functioning as a central public space, common for local residents and a place that invites external visitors. Two alleyways located on north and south sides of the central park establish network of pedestrianised routes that expand further into the rest of the site.
13 of 18
Previous Next
Close 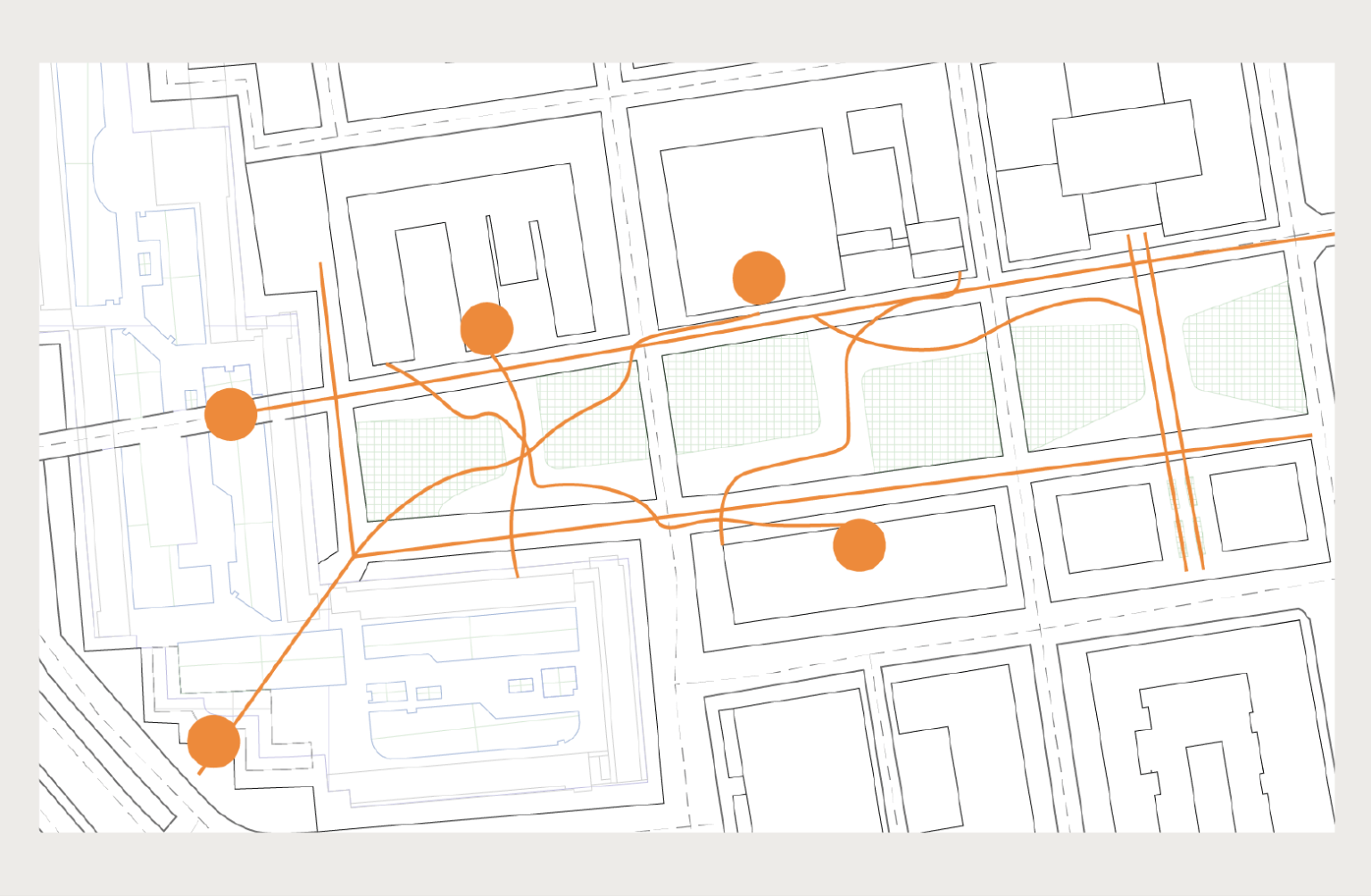 Alternating patter of green and hard surfaces is based on predictionsof desire paths between main points of interest. Suggesting buildings of adaptive re-use and repurposed car park as a key objects of public interest, public space is shaped to address movements to and from these.
14 of 18
Previous Next
Close 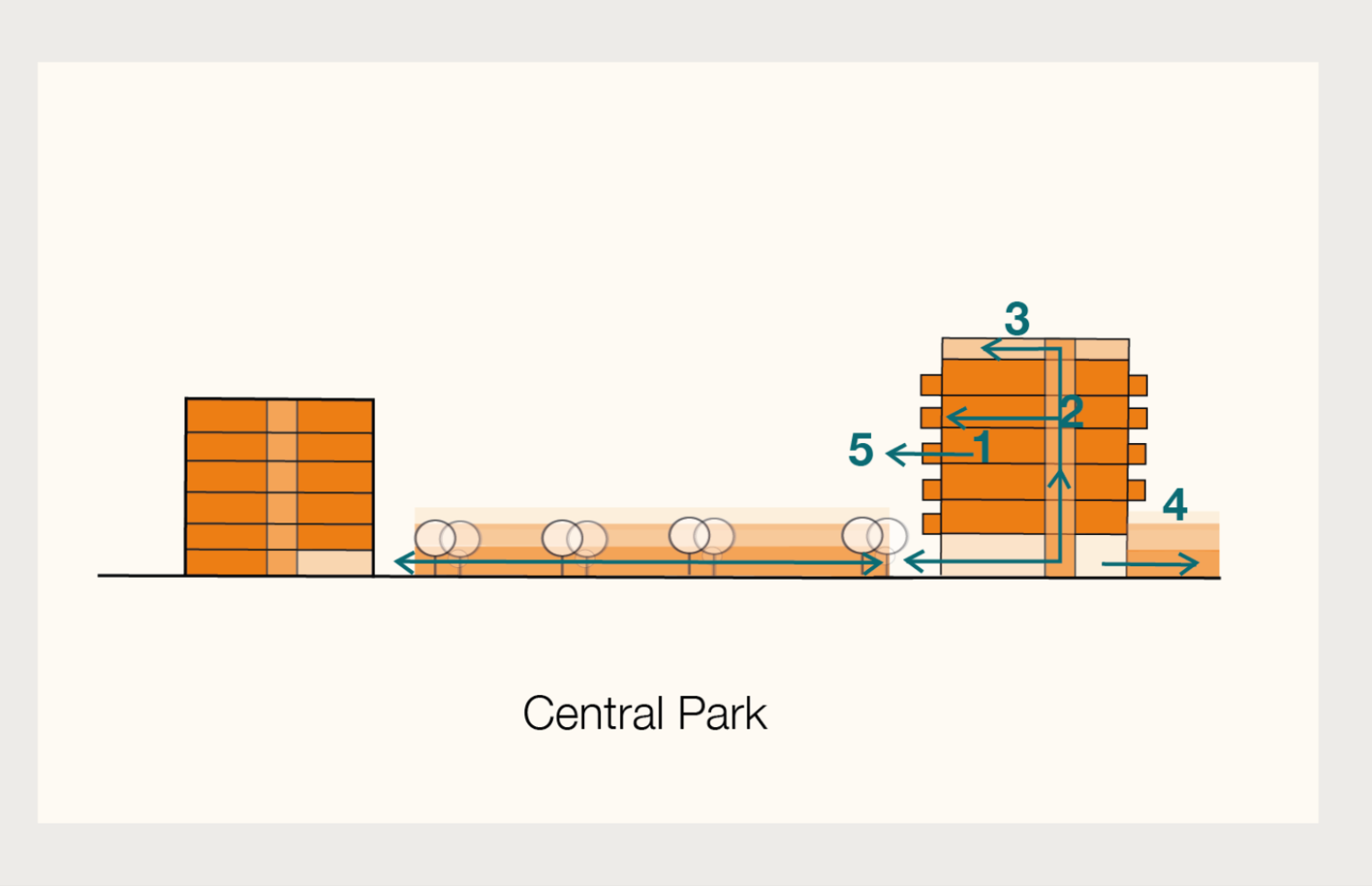 thresholds of the central park 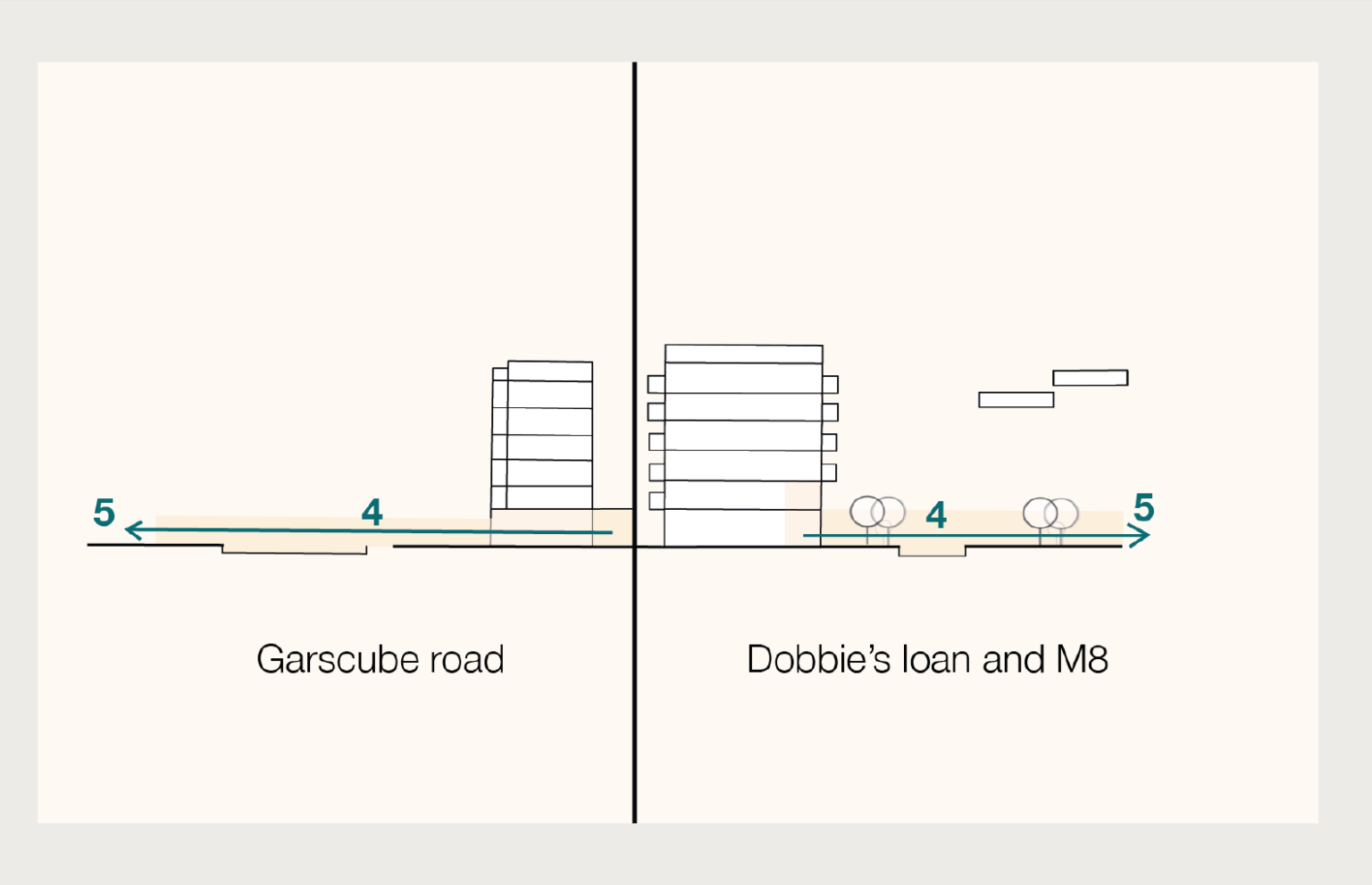 thresholds of the lowered roads 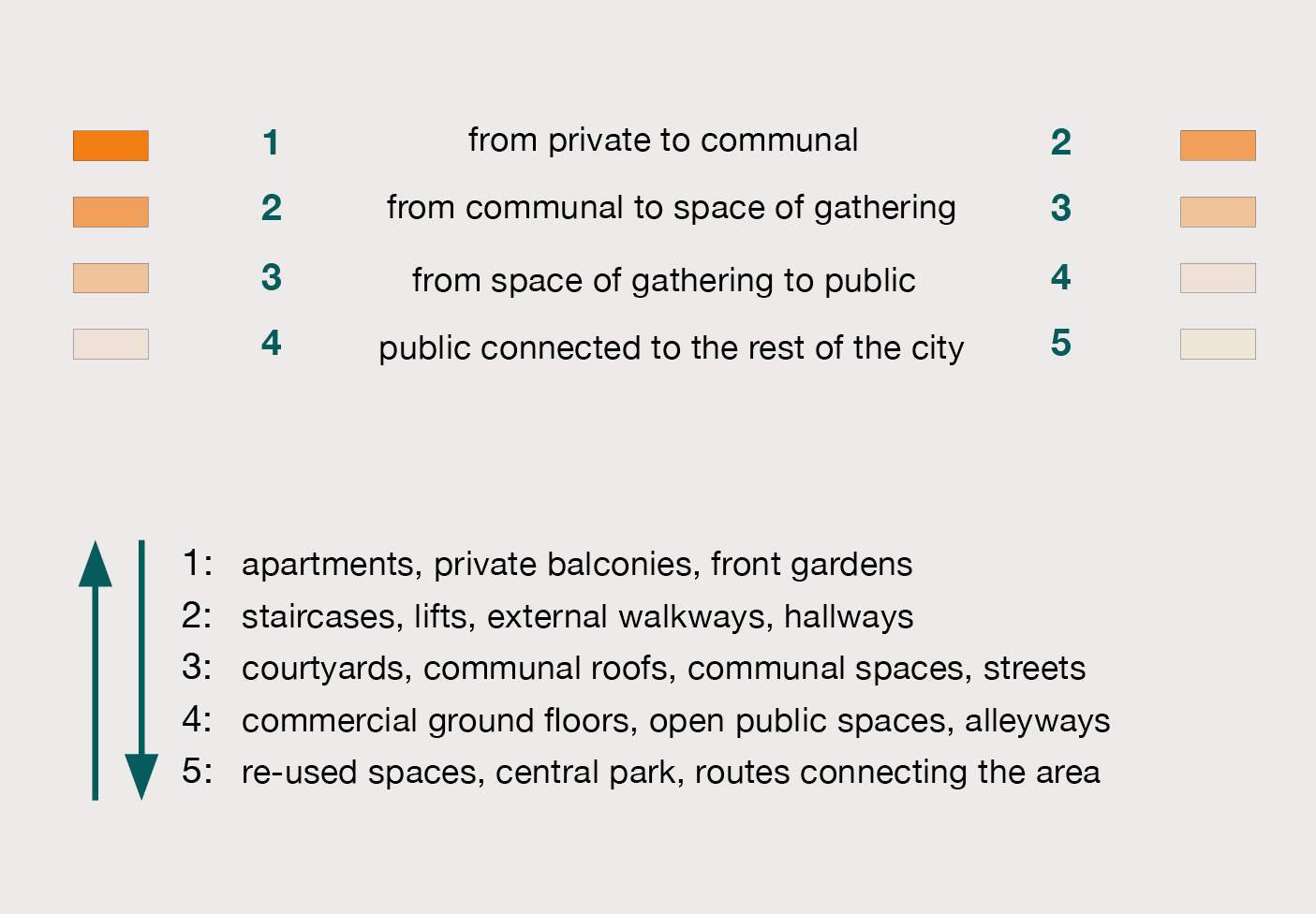 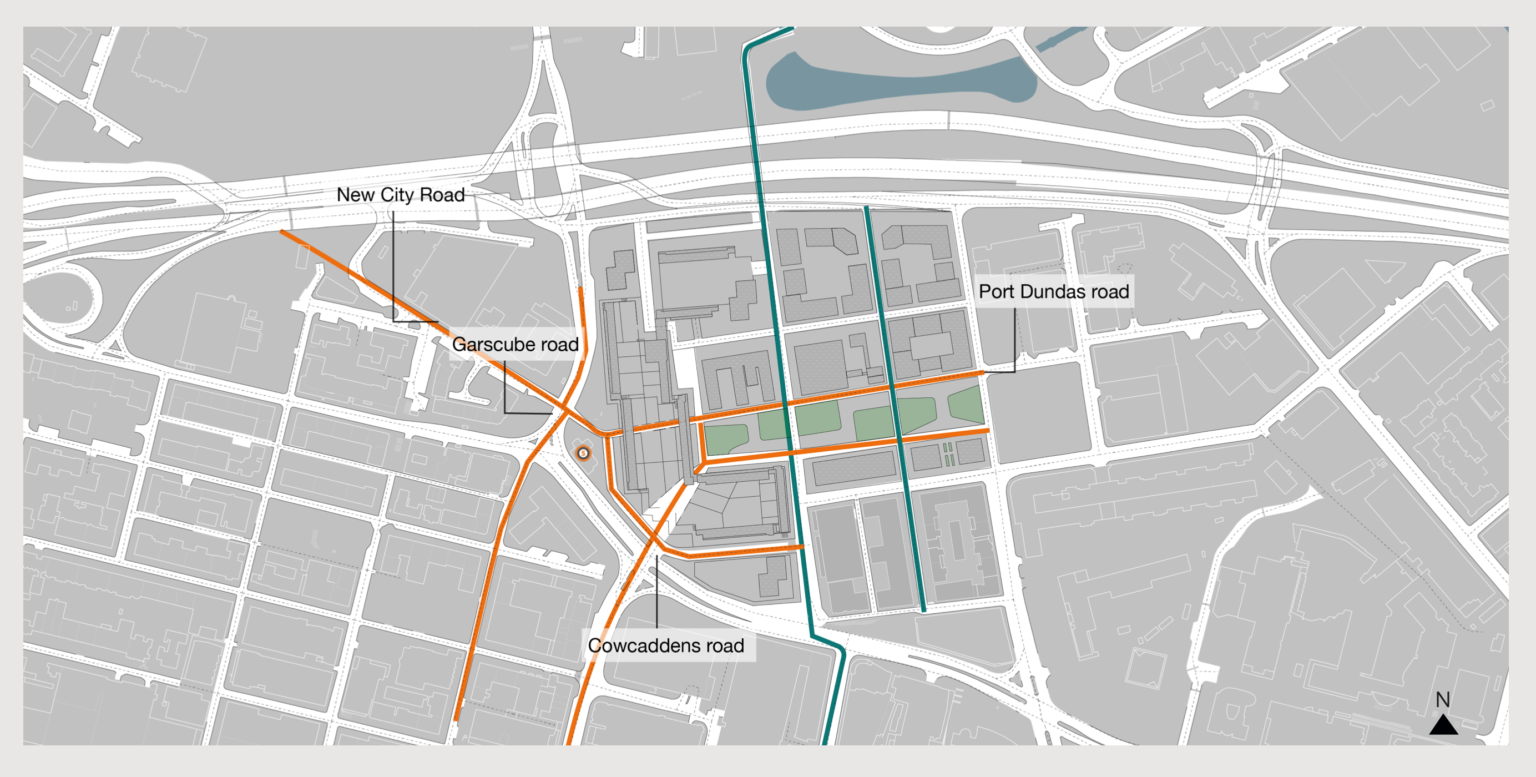 In the current conditions for the East/South routes, Cowcaddens Road transitioning into Garscube road on the eastern and southern sides of the site prevents integration of the area to the rest of the city. As a solution, lowering these roads is proposed, thus integrating newly established pedestrian routes with the rest of the road network within the site. At the North side of the site, Elevated M8 is restricting access to the north of the site disregarding the opportunity of direct connection with the Speirs Wharf and Sighthill. The proposal suggests establishing a route through the ground level of M8 following the street pattern of the proposed site. Noise pollution is suggested to be mitigated via external landscape, vegetation, noise screen, additional buffer zone and design specifics of blocks facing the motorway.
18 of 18
Previous Next
Close