The Earth Talks About Me Like I Am Not There draws inspiration from the mycelium network’s ability to distribute nutrients on a needs basis.

The mycelium hexagons connect my body to the earth, to the air, and to water in each landscape. Through a process of fabulation, of writing against footage and attempting to collapse the divisions between land, and sea and creature, The Earth Talks About Me Like I Am Not There is written from the perspective of our planet as if it were just discovering humans as a species, which (in its relative lifespan), seems quite possible.

Sometimes digital life overwhelms me and I would rather be something quieter than a human. I have turned to the natural world and been treated equally as a cell-based organism; the earth always feeds me whichever nutrients I lack.

The mycelium screen is a mirror. It holds itself before us and reflects our fragilities as a species but also our potential to find innovative ways to nurture the environment by harnessing biomaterials. 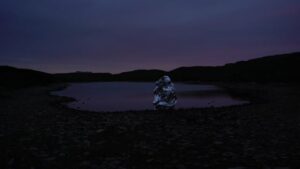 Clean version of the film without mycelium screen. Digital Video with sound. (4 mins 30)