Both film and architecture are four-dimensional art combining time and space. Architecture is formed by integrating space, shape, color, and other materials, while film logically connects each scene through “montage” to form a relatively complete film framework. Both methods have the nature of the composition, and the application of montage in space is worth studying because of their internal relationship. The montage technique can provide a new understanding of the interior design idea. Feminism is one of the critical thoughts in the world in recent decades. A feminist film is an art form with women as the main body and reflects the fundamental spirit of feminism, in which female consciousness is an essential form of expression. This project aims to present the female consciousness as the perceptual object at the spiritual level in spatial language.

By studying Bernard Tschumi’s architectural practice, the methods used by montage in space were summarized and applied to the space translation experiment. Taking the film Swallowtail Butterfly directed by Shunji Iwai as the practice object, the different female consciousness embodied in the two heroines in the film is transformed into physical space. On the one hand, the experiment systematically practiced the methodology based on mutual learning from film to space. On the other hand, women’s exclusive discourse right was emphasized in film narration. 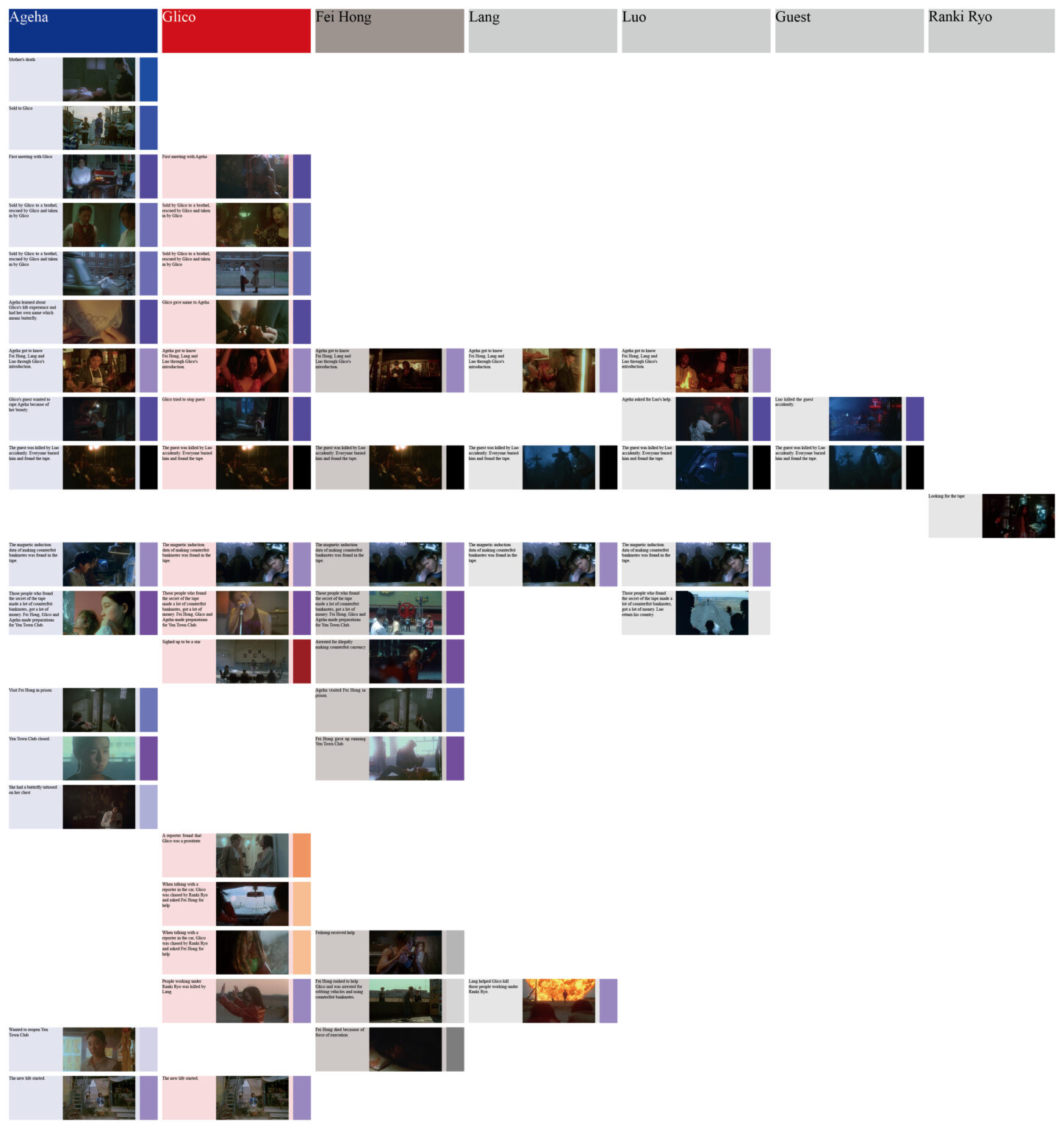 The story of Swallowtail Butterfly revolves around Ageha and Glico. After her mother's death, the "Yen Town" girl who originally lived in the "gold paradise" regarded by many foreign immigrants was sent to Glico, a prostitute. After taking the girl in, Glico named her Ageha (Ageha means swallowtail butterfly in Japanese) according to the butterfly tattoo on her chest. Soon, under the leadership of Glico, Ageha met "Yen thieves" from different countries, such as Fei Hong and Lang, at the Blue Sky maintenance station, and gradually became familiar with them and became good friends. In an accident, people became rich overnight because of a tape recording the song "My Way" and hiding magnetic induction materials for making counterfeit banknotes. After making a fortune, they also began to embark on different roads. Glico, who has excellent singing talent, was signed by the record company and broke off the relationship with everyone under the company's pressure. When Ranki Ryo, the owner of the tape and the underworld boss, learned about the tape's whereabouts, he began to send his men to hunt down Fei Hong, Glico, and others, and their fate began to contain each other.
1 of 6
Previous Next
Close 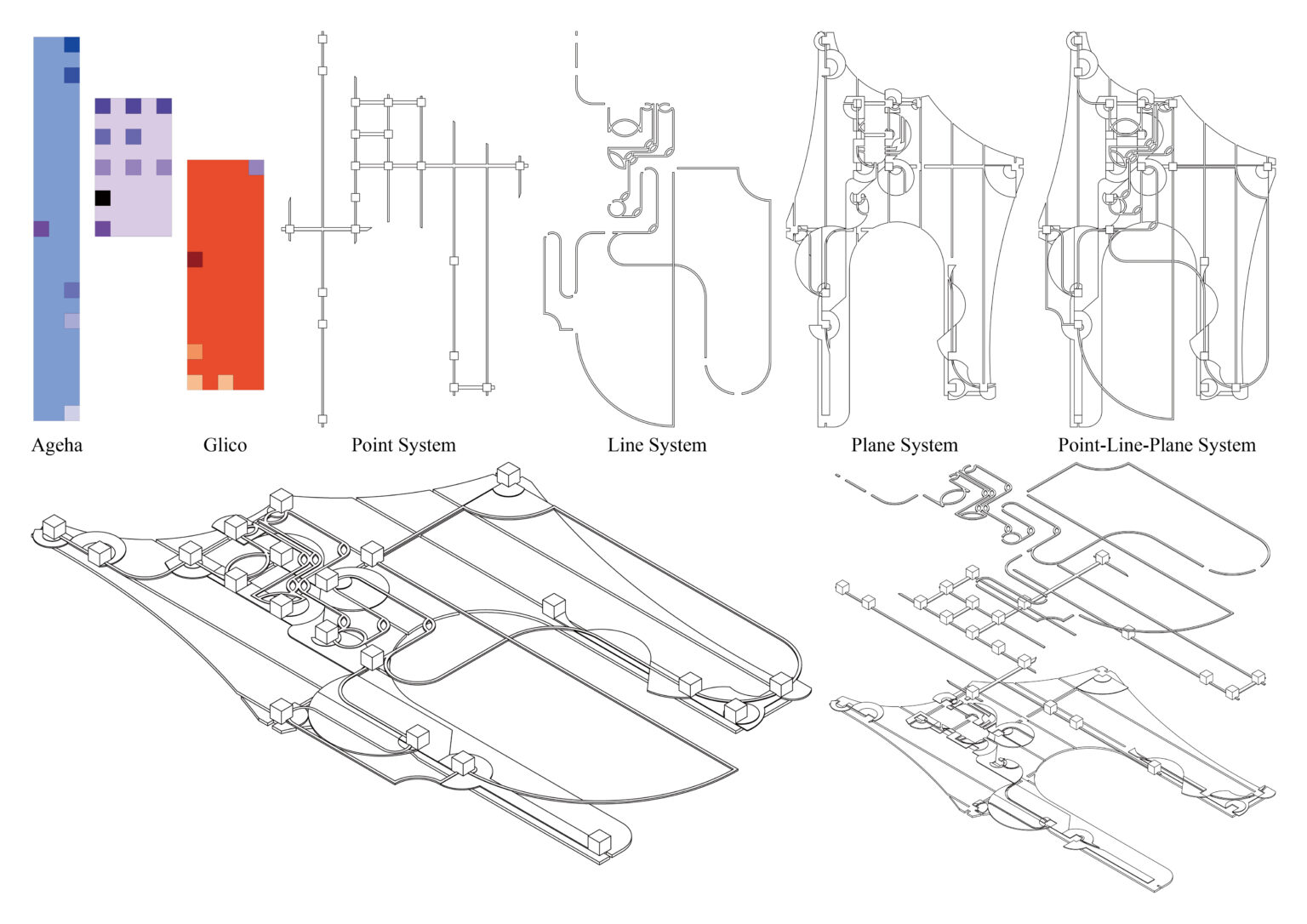 Sort out the character event space in chronological order. The characters appear horizontally in the first behavior film, and the film screenshots represent the events sorted in time vertically. The event experienced by everyone in the same period is in the same line, and the color after the event represents the different spaces at the time of the event. It can be seen from this diagram that the storylines of the two heroines are intertwined. The table is simplified. On the left is the space experienced by Ageha alone, on the right is the space experienced by Glico alone, and in the middle is the space experienced by the two together. It is sorted from top to bottom in chronological order, and then the arrangement of the same space is obtained according to the path analysis of the female owner. Different colors represent different spaces. The point line surface system is generated on this basis. The point system is the space where the event occurs. The line system is the moving line of the character, and the surface system is the integration of space. This point, line, and plane system is the spatialization of film montage structure, and the film's meaning is based on this system.
2 of 6
Previous Next
Close 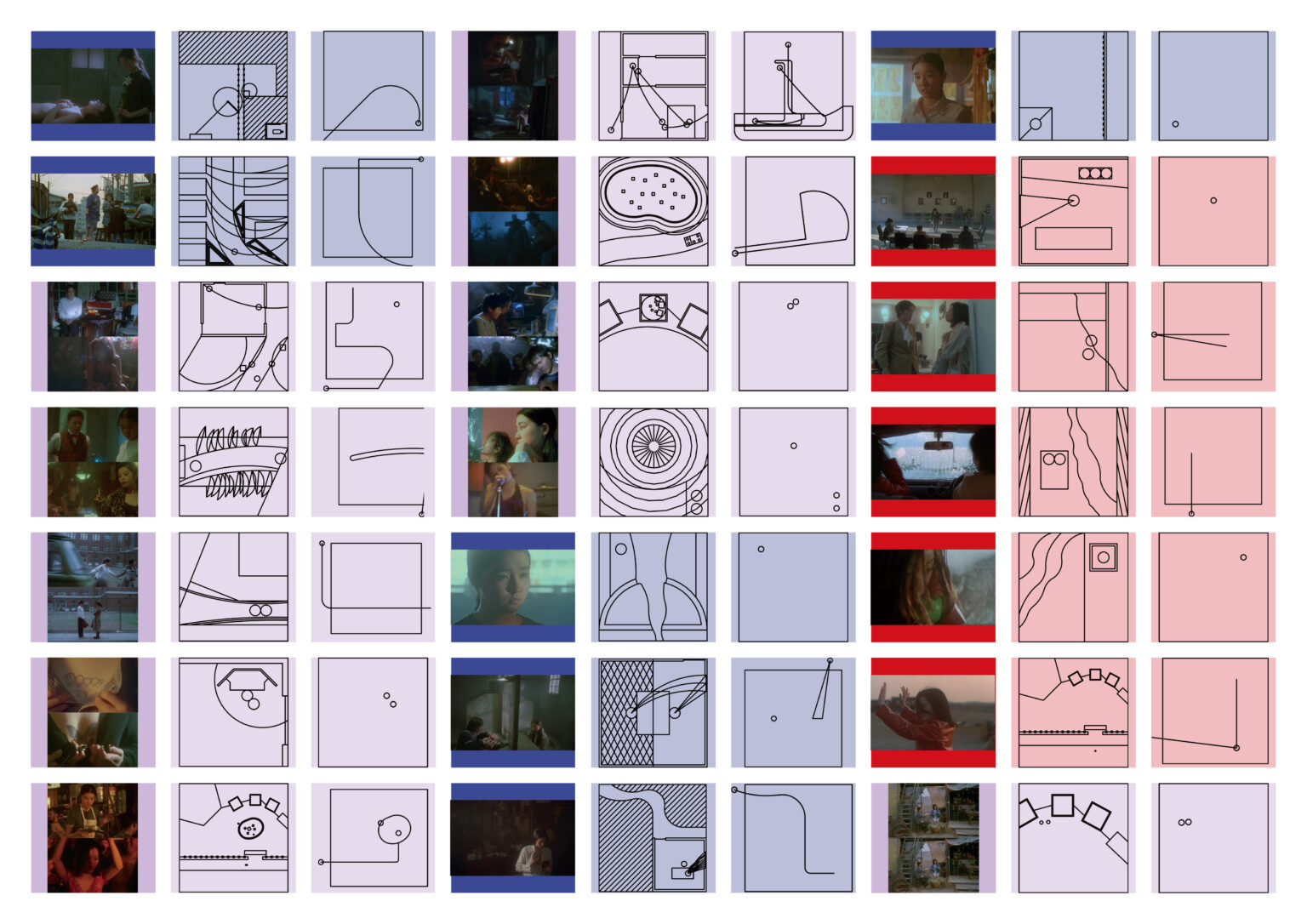 The embodiment of female consciousness is also contained in the montage structure. The female consciousness of the film has different embodiments in the two heroines. Ageha's narrative line reflects the female growth consciousness in identity construction, while the deconstruction and lack of male discourse are reflected in Glico's narrative line. Each event is analyzed separately based on the point, line, and plane system to transform the montage fragment showing female consciousness into space. There are 21 sets of legends in the whole article. The first is a screenshot of the film, and the second is a superimposed plan of the spatial layout of the event and the character's psychology, which is a spatial sequence. The third is the trajectory of the character in a single space, which is a time series. A spatial expression of female consciousness is obtained when space and time series are superimposed and transformed into three-dimensional space.
3 of 6
Previous Next
Close 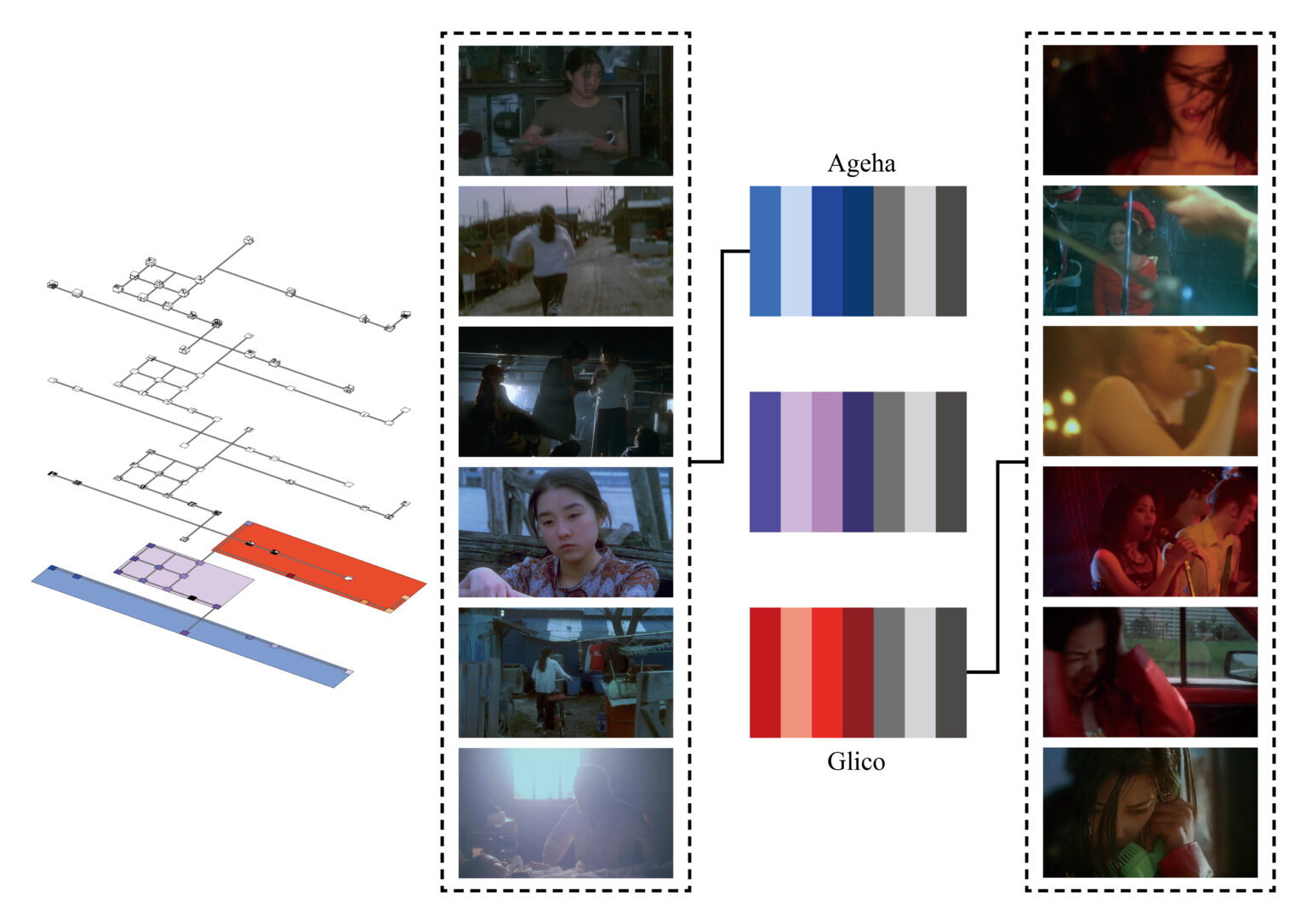 The interlaced contrast structure also exists in the color tone of the film and the depiction of female images. In the film, Ageha's color tone is mainly blue, and her clothes are mainly black, white, and gray, reflecting her silent and robust positioning. The color tone of Glico is mainly red, and most of the clothes and accessories are red. Red can reflect the enthusiasm and casual positioning of Glico. When interwoven, red and blue are superimposed to form purple, so red, blue, and purple are the primary color of the whole space system. Blue represents Ageha, red represents Glico, purple is the shared experience, and black gray is external factors.
4 of 6
Previous Next
Close 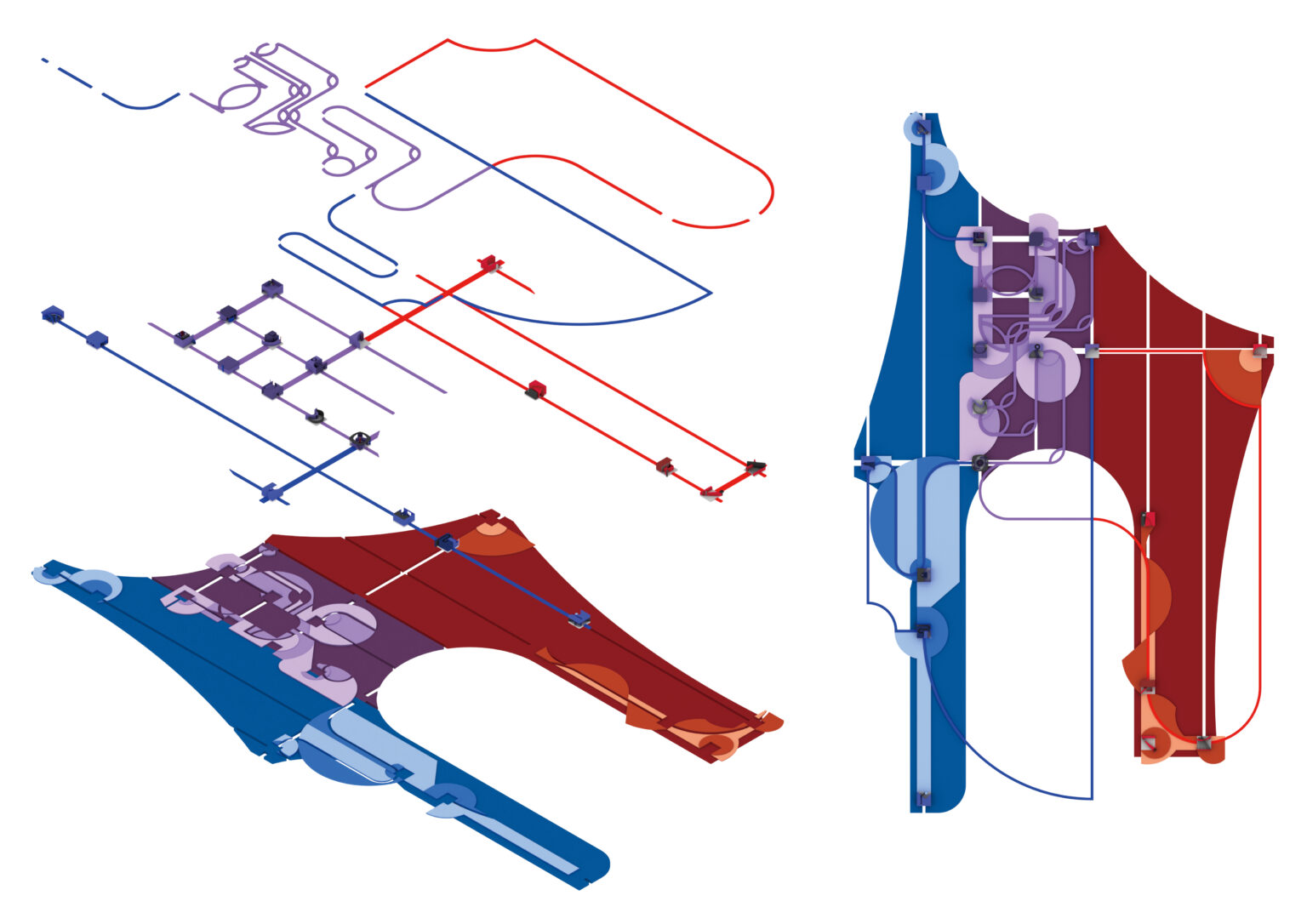 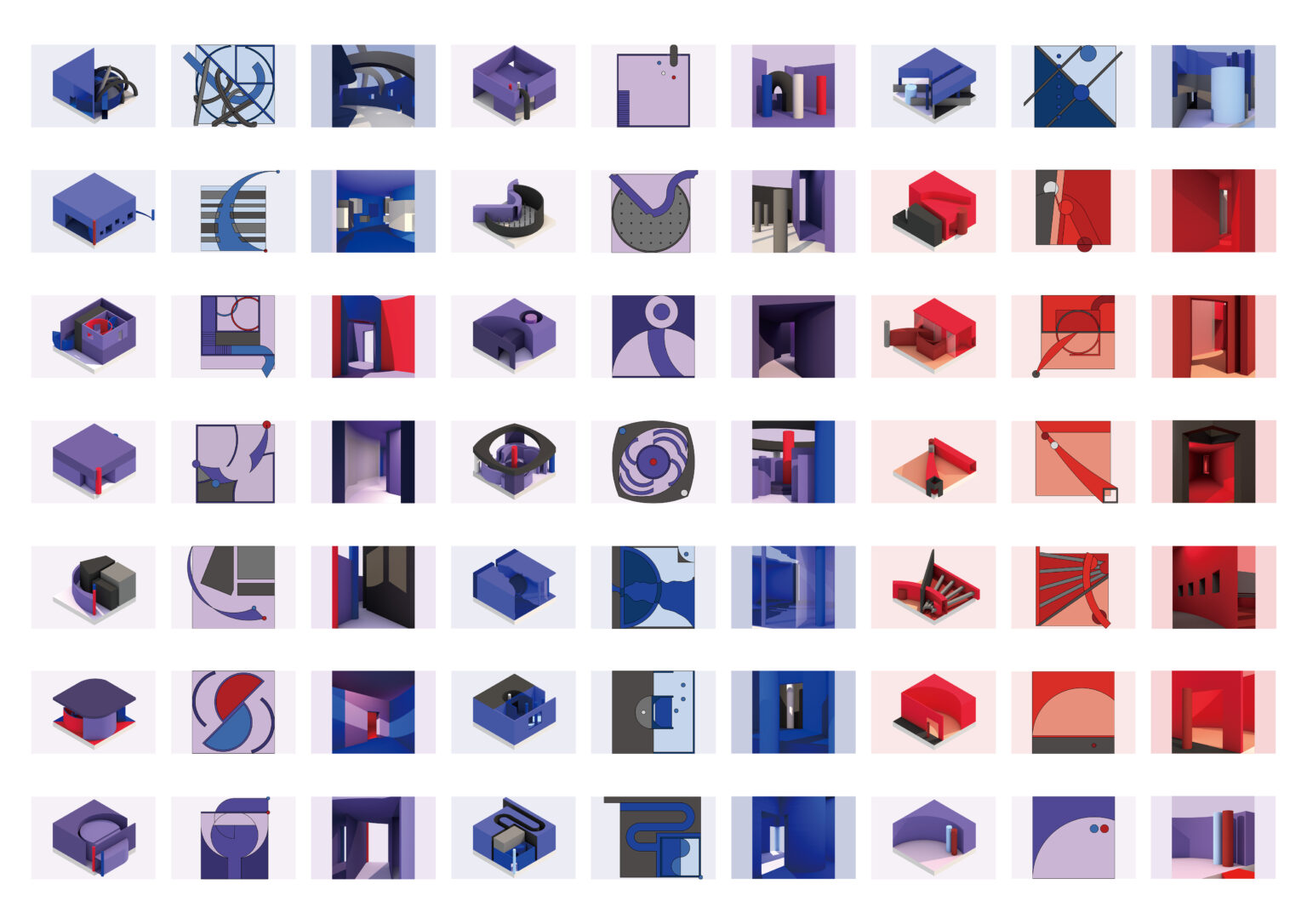