In today’s day and age, we live in an extremely polarised political environment, and this is a global phenomenon. We are faced with systemic polarisation in society and social media has had a huge role to play in this, resulting in increasing skepticisms and anxiety amongst todays youth. While initially social media platforms were once heralded by society as a tool to foster greater human connection with instantaneous flow of information, this may no longer be the case. The way these platforms have evolved since their conception has led them to contribute to the political polarisation, violence and discrimination in society (Hua, 2021). It has brought like-minded individuals closer together with just a click of button and also resulted in the widespread circulation of fake news. Even todays news outlets have changed their narrative and delivery, taking cues from this polarised environment.

“When ideological differences harden into identity divides, belonging to one camp or the other becomes not just about voting a certain way or preferring certain specific policies, but also about being a certain type of person with particular social values and belonging to a certain group (Carothers and O’Donohue, 2019).”

Cultural cognition causes people to interpret new evidence in a biased way that reinforces their predispositions. As a result, groups with opposing values often become more polarised, not less, when exposed to scientifically sound information (Kahan, 2010). Some people believe that polarisation and being exposed to contradictory views is good (McConnell, 2021). However, how is it beneficial if we can’t have conversations without it breaking down into an argument and as result don’t understand the other perspective?

My project Poli-Tik explores this tension existing in society and impact it has on social relations. It explores the idea of affective polarisation and tries to find a way to bring a fractured society together by changing the narrative and nature of discourse. It aims to challenge the existing cultural cognition and make people question their beliefs. If we start with this self introspection, maybe we can form a more empathetic society open to understanding the other perspective.

How Might We create conflict resolutions tools to encourage individuals to question their biases, hence resolving polarising debates in different scenarios?”

I based the idea or experience of the workshop on the hypothetical journey informed by my interview insights. The journey began with self-identification of ones biases and ended with collective decision making or compromise. This would result in finding a common ground by allowing them to humanise the issue and focus on the individual instead of the point of contention. The impact or applicability of the concept as I see it is that the cards used in the workshop could be tools for conversation or self-introspection. The workshop could be used for team building or otherwise conflict resolution. To expand the concept further I ideated on a digital prototype to connect stakeholders in the ecosystem and build awareness.The main feature however, is that it allows individuals to create their own cards.

The most important thing I learnt throughout the process was that you start project one point and end at another. I started the project wanting to explore the topic of political polarisation and comedic satire. However, the final solution was based on dialogue and getting individuals to question their biases. Along the way I explored various fields from political theory, psychology to the art of conversation. The journey and thought process is as important as the final solution.

To see the entire process – https://issuu.com/theglasgowschoolofart/docs/ppj_-_mihika

I mapped out the existing journey of individuals as explained by different experts in the field of psychology and sociology. The theory of the spiral of silence as proposed by Elisabeth Neumann (Noelle-Neumann) says fear of misinterpretation, isolation and public perception leads to a downward spiral that prevents individuals from speaking up. Social media gives some of these individuals a voice however the cycle of toxic narrative it creates can lead to depression and anxiety. However social media is just one of the echo chambers that we encounter in our daily life.
1 of 6
Previous Next
Close

The main points as highlighted by these journeys were that individuals didn’t want to engage in argumentative conversations due to fear of misinterpretation and misinformation. Mapping out these experiences faced by individuals showed me that whilst they may get most of their information from social media, a lot of the issues they faced were in offline interactions. The individuals who were from liberal families felt they had more informed opinions. The flipside of this was that they only wanted to engage with individuals who were more aware of their reasoning and the curious to understand the other perspective. Transient interactions were not worth engaging in confrontational conversations and its mainly issues with friends and family where one finds it difficult to empathise due to the perceived irrationality of conversations.
2 of 6
Previous Next
Close

The main idea behind the workshop was to get individuals to question their biases and understand why they react to contentious scenarios. In the workshop I divided the participants into two groups and asked them to answer a few questions individually. The second step was to write down group values and issues which were important to them. I then asked them to react to hypothetical situations based on the cards I had given them. This encouraged discussion on two levels – first an internal group to come to a consensus and then explaining the reasoning to the other groups. The workshop ended with the participants individually writing down what they had learnt, and they would possibly do differently in the future. In the end they had a created sort of a visual mindmap of their beliefs and ideologies.
3 of 6
Previous Next
Close 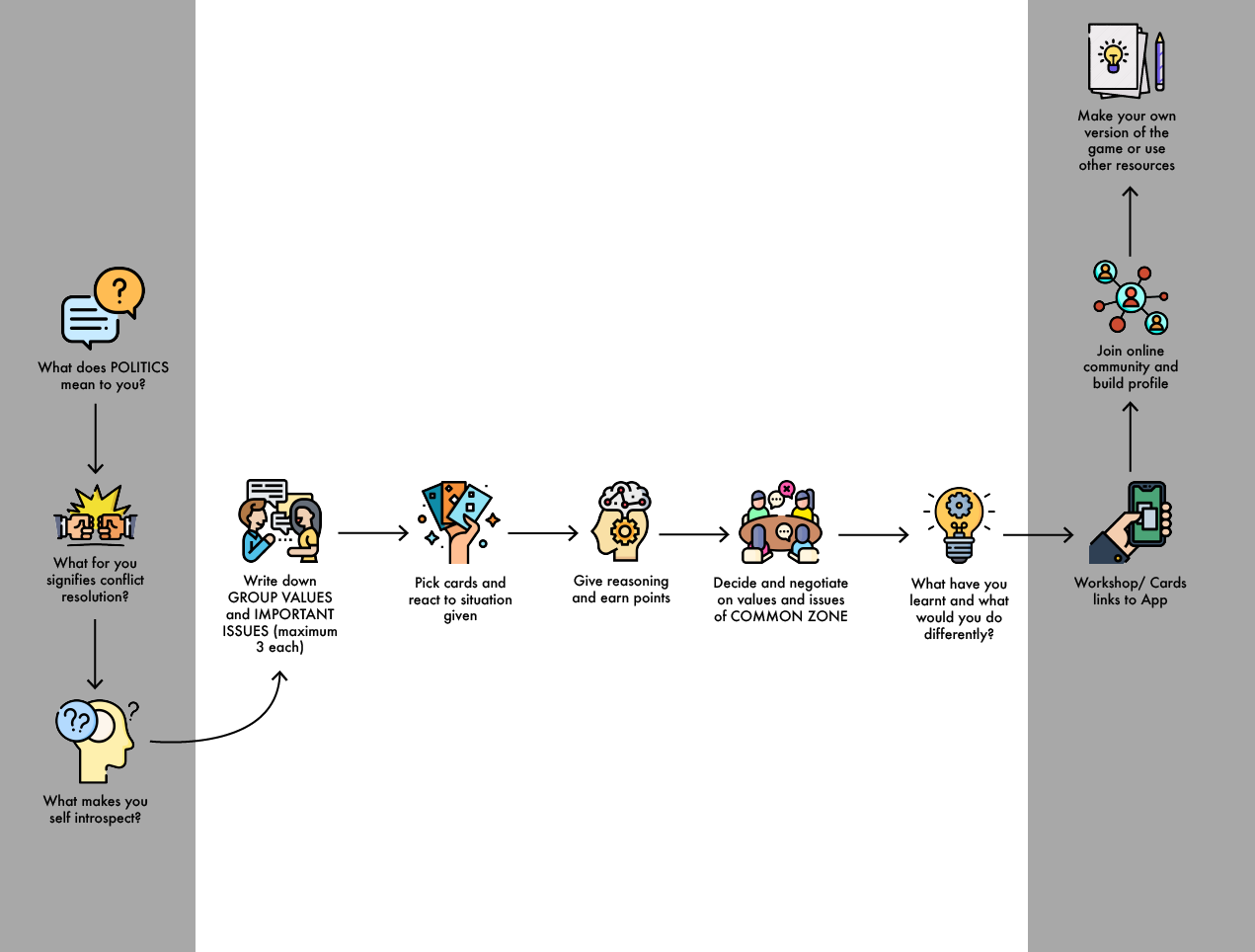 Based on the feedback of the workshop I further iterated on the concept of the workshop. While the participants said the workshop allowed them to overcome their bias and realise that everyone reacts similarly, there were some aspects which I felt could be improved. My observations from the workshop were that the groups mostly used non-confrontational cards, but they were able to justify the use of the cards and each group interpreted them differently. One thing which was lacking is that the values and issues and written down by each group didn’t connect to the final outcome. In the final prototype to connect the group values and ideologies to the outcome I made the workshop more speculative. This was incorporated in the prototype by getting the groups to imagine they were separate entities on an island. After answering the scenarios they would have to compromise and deicide on the values and goals of the common area of the island.
5 of 6
Previous Next
Close 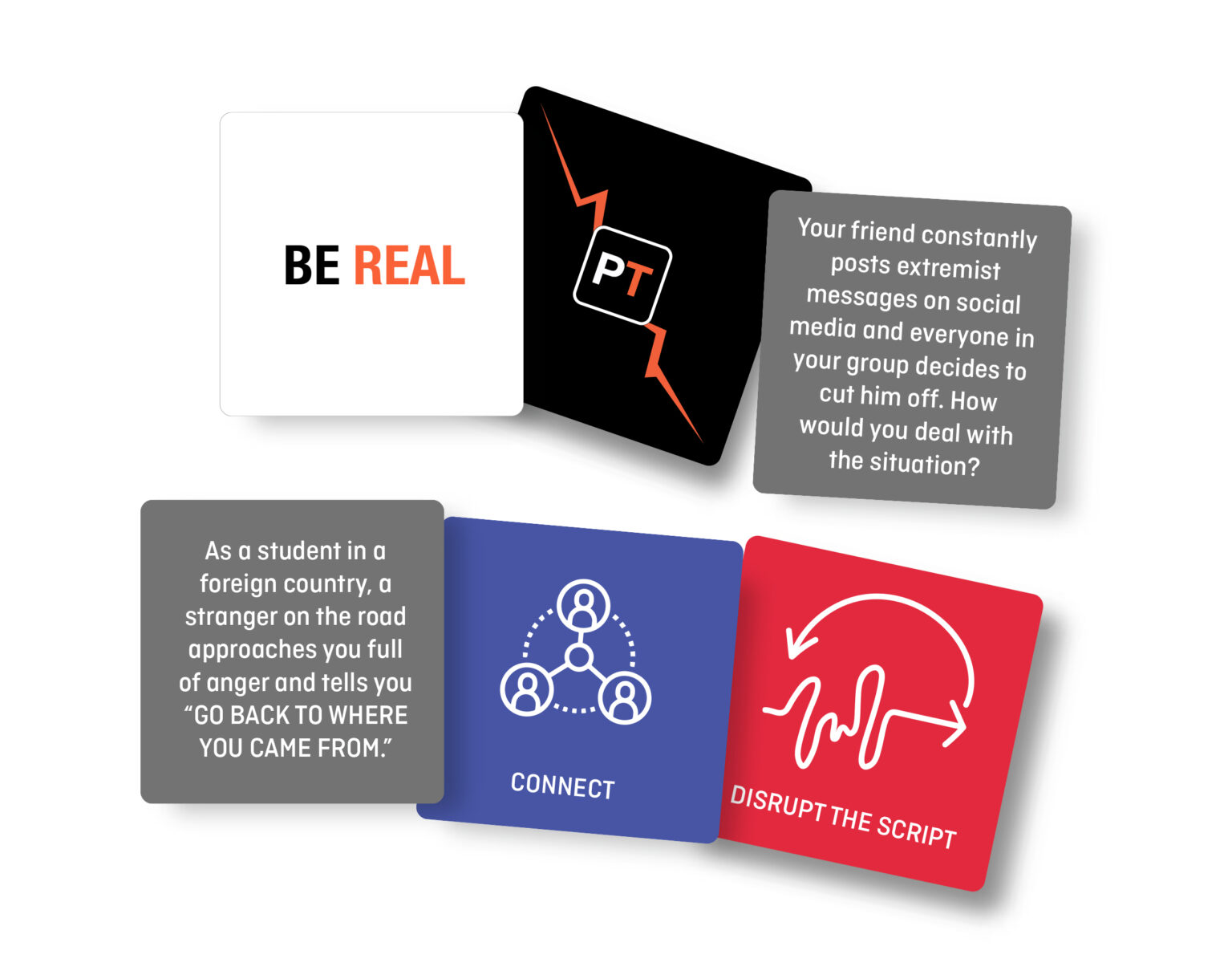