My Outsides Are Now Your Insides

Julie had recently changed to night shifts in the nursing home. She needed the mornings to drive her mother to bridge and do her shopping. The night shifts suited her better. The nursing home was quiet at night and she wasn’t fond of the other members of staff. They were bitchy and cold towards her. Then again Julie didn’t like anyone.

The night shifts were a skive unless something went drastically wrong. So she was able to go about her business in peace.

Barry was new to the nursing home. He had arthritis so was unable to live independently. His family couldn’t look after him. Before retirement he worked as a dentist. He was a handsome older man with a cultured bookish vibe to him. Barry had a couple of insecurities- his hernia and his erectile dysfunction. He had had his hernia for over 5 years. It was huge and was phallic shaped and bulging out of his stomach. His erectile dysfunction was due to his medication. Barry wasn’t getting any so it wasn’t the end of the world but he did get lonely.

Julie began to notice Barry and his bookish other-worldly charm. They’d make awkward conversation with each other when she changed his bed. However, one time she noticed Barry was reading Infinite Jest by David Foster Wallace.

“I love that book,” she said peaking over at him sheepishly.

There was no one else in the room and a sudden sexual urge came over Julie. Something so powerful she must act on it. “I need you to fuck me right now!” she demanded.

“Oh well ok,” Barry smirked. Barry was already lying down. Julie removed her panties and got on top. She pulled Barry’s trousers down and tried to put Barry inside of her but his knob was flaccid. She sighed with frustration. All this adrenaline going to waste.

“Sorry,” Barry looked down in shame.

Julie studied Barry’s body while she pulled up his jumper and T-Shirt. The softness and hardness of it all. His flabbiness, boniness, doughiness and sharpness. She noticed his hernia.

Julie slid her wet vagina over his hernia. It filled her vagina completely. She began to bounce. Barry leaned back and closed his eyes. 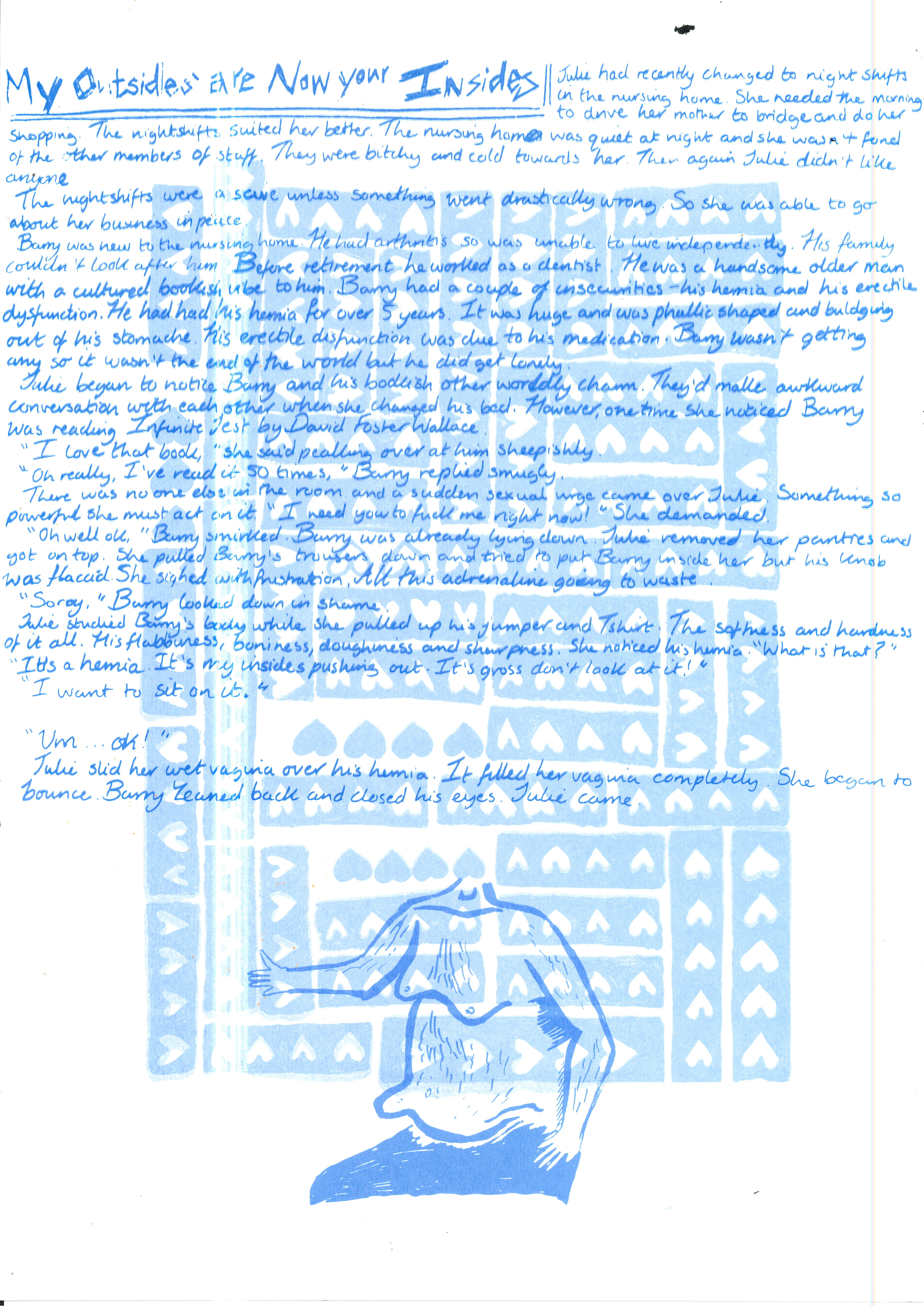 My Outsides are Now Your Insides