Life Recycling: An Alternative Feminist Narrative of Birth and Death

Life Recycling: An alternative feminist narrative of Birth and Death revolves around creating a feminist spatial design, which combines the experiences of Birth and Death. The fundamental aims of the project are to restore the role of femininity in the events of Birth and Death, to encapsulate feminist ideals within an interior space and to adapt an overall feminine approach to design. In doing so adding to the ever-growing discourse surrounding feminism in regard to Interior Design and challenging the limits and parameters of the subject. As well as this the objective is to create a non-religious solution that provides acceptance and comfort when confronted with the subject of our own mortality.

Researching feminist discourse was integral to my project as well as the exploration of films, literature, design and art. Key findings from my research were the many correlations between Birth and Death, the historical relationship between women and nature within the interior and the connection between femininity, sentiment and ritual. I also adapted a feminine approach to the design process which incorporated fluid research methods such as imaginative drawing, collages, experimentation and 3D modelling. From such studies I was able to unearth an in-depth understanding of my project which fuelled core developments of the project.

The result of my research manifested in three identical structures which act as temporary birth/burial Life Recycling centres, the skin of the buildings are designed to decompose after five years allowing nature to reclaim the site. Core mechanisms within the design are underground Metamorphic Pods which use the energy produced by deceased bodies to grow artificial wombs where babies are grown, and Decomposing Ornamental Graves which serve as a form of remembrance for the deceased and for parent(s)[1] of born/unborn babies. The project acts as feminist interpretation of spatial practice which challenges the rules, conventions and male canon of design and academia.

[1] Parent(s) referring to the variable combinations of guardians due to the use of Artificial Wombs. 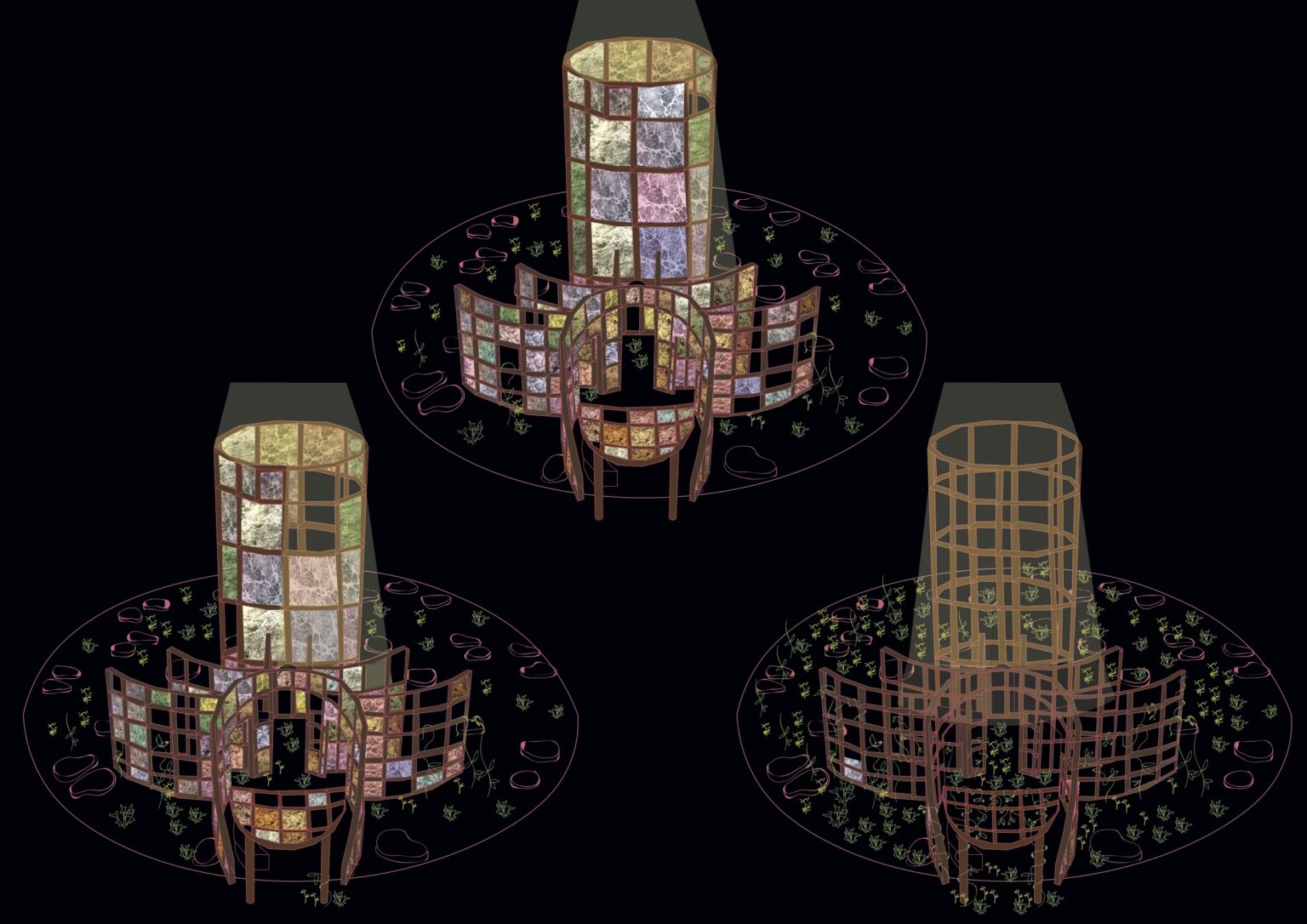 3 of 17
Previous Next
Close 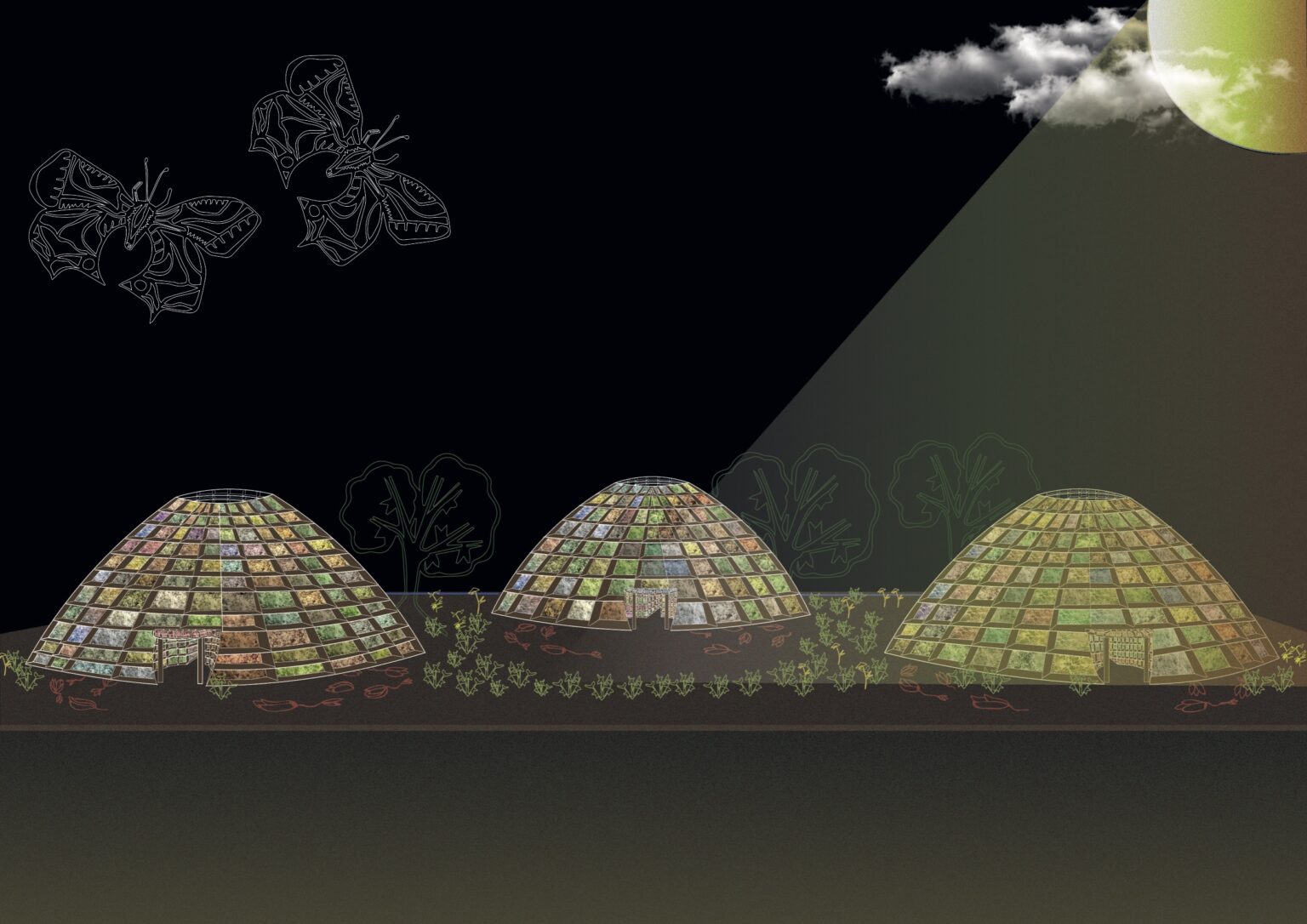 The structural skeletons are entirely made of wood, whilst the fabric of the building is made of Mushroom Mycelium which will begin to decay after five years. When the mycelium begins its decomposition, the building will become open to all members of the public, as when it’s in use the only inhabitants are loved ones of the deceased, parents of the babies, and on-site Birth and Death doulas. Nature will always be present within the site due to its correlation with femininity and as time passes nature will grow freely and collide, merge and combine with the structures and the spaces will eventually transition into public memorial parks. The transition between private (Feminine) to public (Masculine) challenges and blurs binary gender roles, which is reflective of the societal reconfiguration the design generates due to the implication of Artificial Wombs. The decomposition and regeneration of the spaces reflects the ethos behind the project which is the acceptance and celebration of the course of Mother Nature. This subsequently provides a non-religious solution to find peace with the subject of mortality.
4 of 17
Previous Next
Close 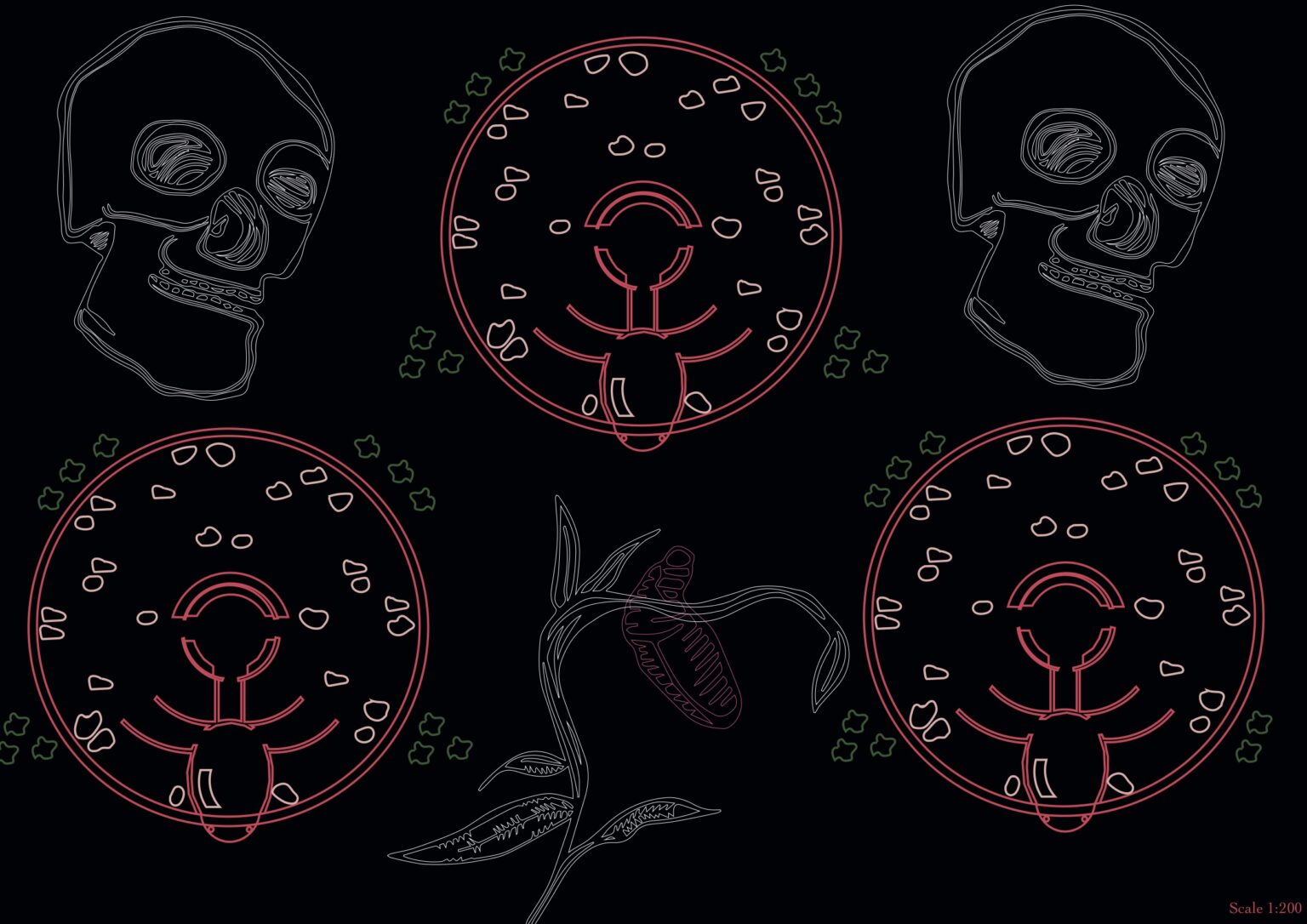 5 of 17
Previous Next
Close

The use of Mycelium is essential to the concept of the project as fungi play a vital role in the eco system as they aid the decomposition of dead animals and plants. The macrostructure of Mycelium is intricate and beautiful and is therefore a physical manifestation of the beauty within decay. Additionally, it symbolises the natural cycle of life. The necessity of cycles as a core attribute to the project is In homage to the pregnancy and menstrual cycle of the woman. The design liberates the women which inhabit the potential future/universe I have created and frees them of their anatomical duty to give birth. In response to this the structure acts as a celebratory memorial in honour of female anatomy as the interior walls mimic the shape of the reproductive system which have been the foundations of civilisation
6 of 17
Previous Next
Close 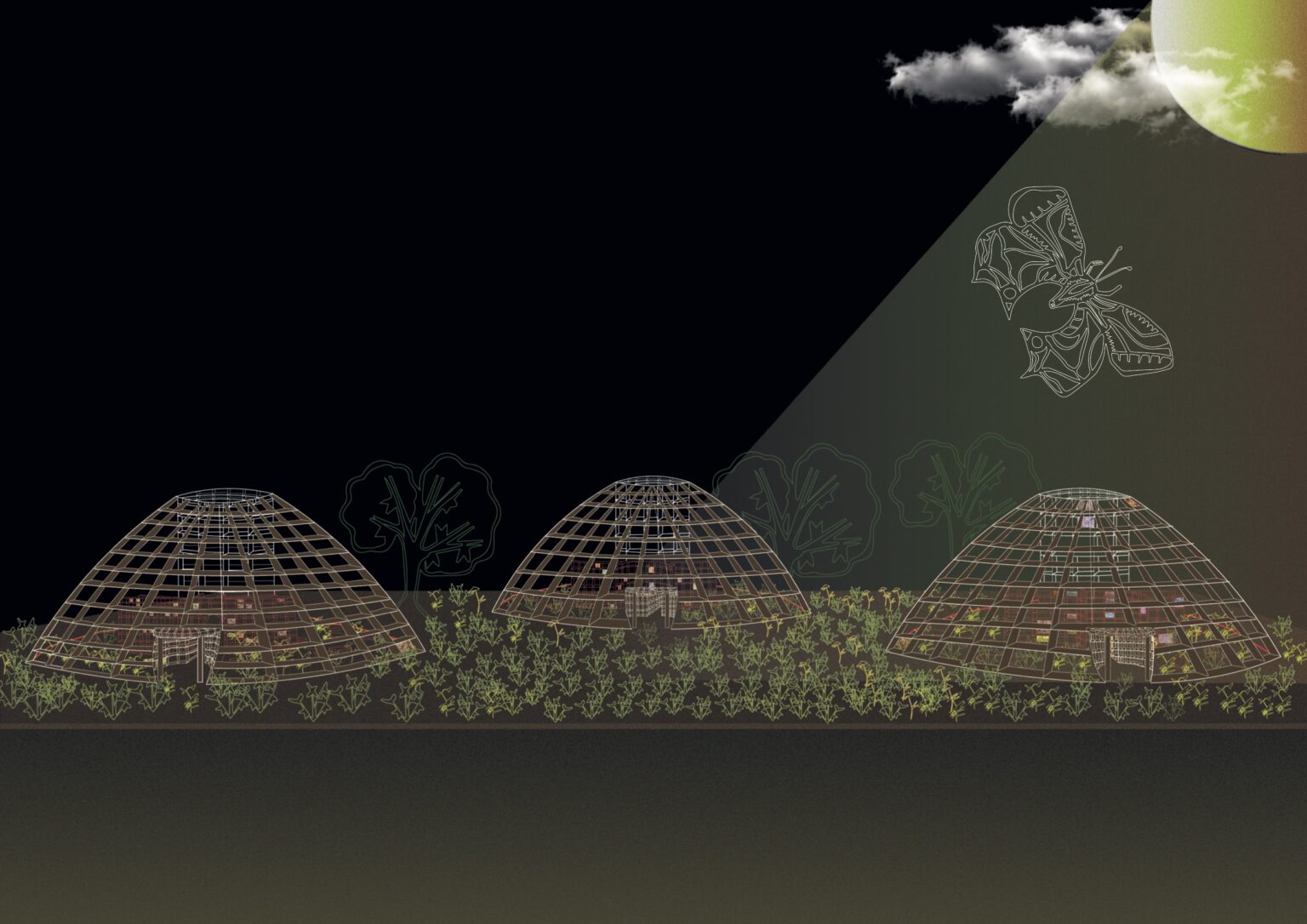 7 of 17
Previous Next
Close 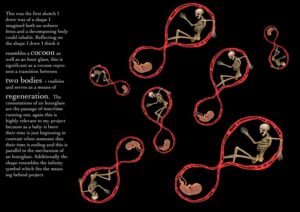 I created the method of Imaginative Drawings as a means of research which allowed me to fully explore the depths of my project whilst embodying a feminist approach that challenges the formality and technicality of the masculine canon in design. The method involved drawing symbolism, mechanisms and general concepts which were conjured in my imagination in response to my research. I would then digitalise the drawings and create collages which I analysed and annotated in order to uncover my subconscious understanding of my research. Through this process I was able to visually develop conceptual ideas and unearth key symbolism to the project- such as butterflies, cocoons and flowers. Using my imagination as a means of research allowed me evolve ideas with fluidity and openness without the constraints of technical and practical thinking. By the end of the project I had a collection of drawings all of which aided in the formation of my final outcome and conveyed an alternative, feminine narrative to design.

8 of 17
Previous Next
Close

9 of 17
Previous Next
Close 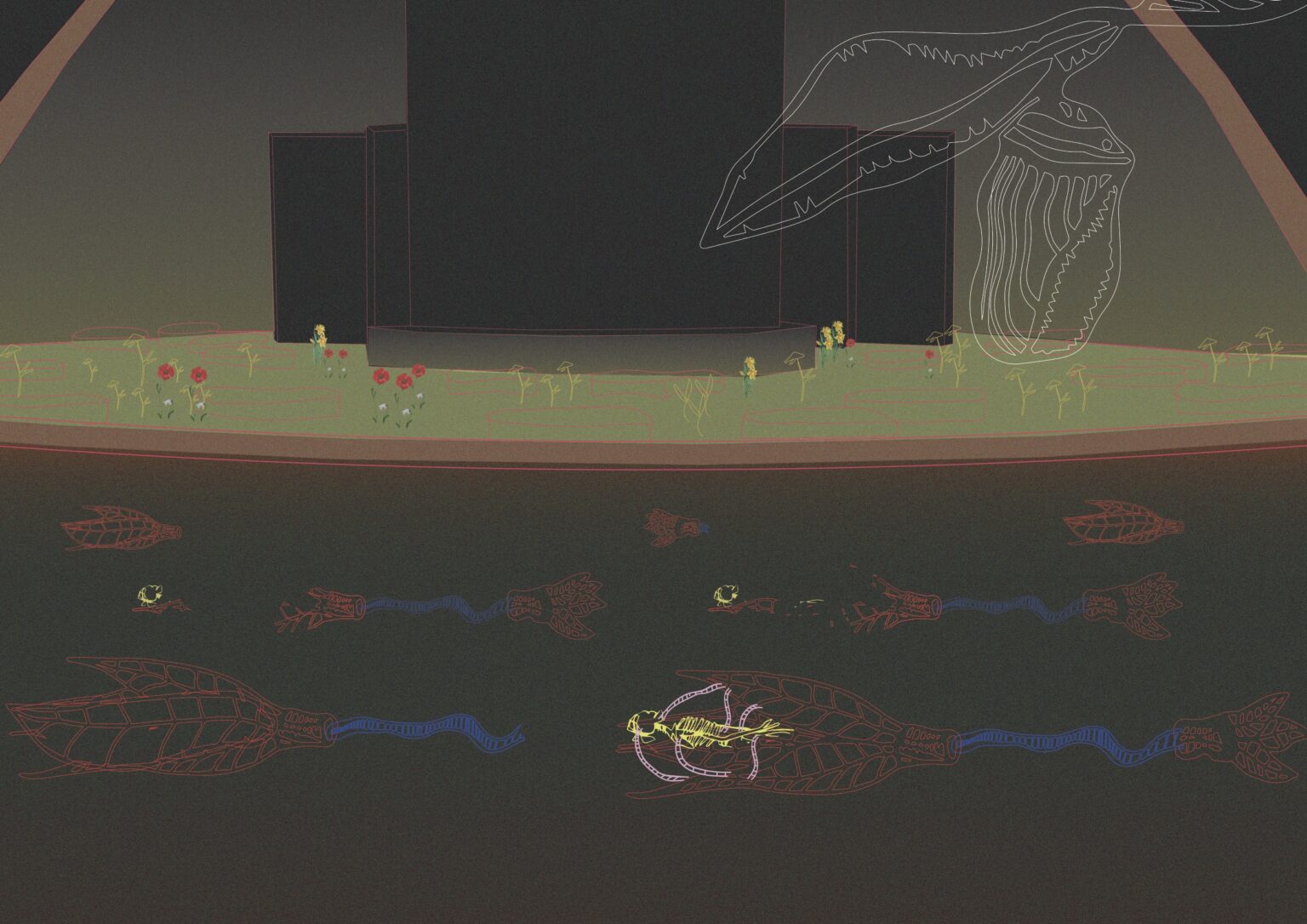 Within the space Metamorphic Pods inhabit the below ground level, whilst above the ground there are individual spaces which consist of Decomposing Ornamental Graves for loved ones of the deceased and for parents of born and unborn babies grown in the space [Fig 40]. The space is intended to be informal and open and although inhabitants have their own individual space they are free to roam the entirety of the site and interact with other visitors. This is intended to counteract highly medicalised environments such as hospitals where inhabitants are typically separated from one another. By encouraging interaction, the design is probing visitors to discuss the topics of Birth and Death with one another, which is intended to destigmatise the taboos surrounding the topics and reflect the ethos of a Death Cafes. The informality and freedom of the space echoes the overall feminist approach to design and the general spirit of the project.
10 of 17
Previous Next
Close 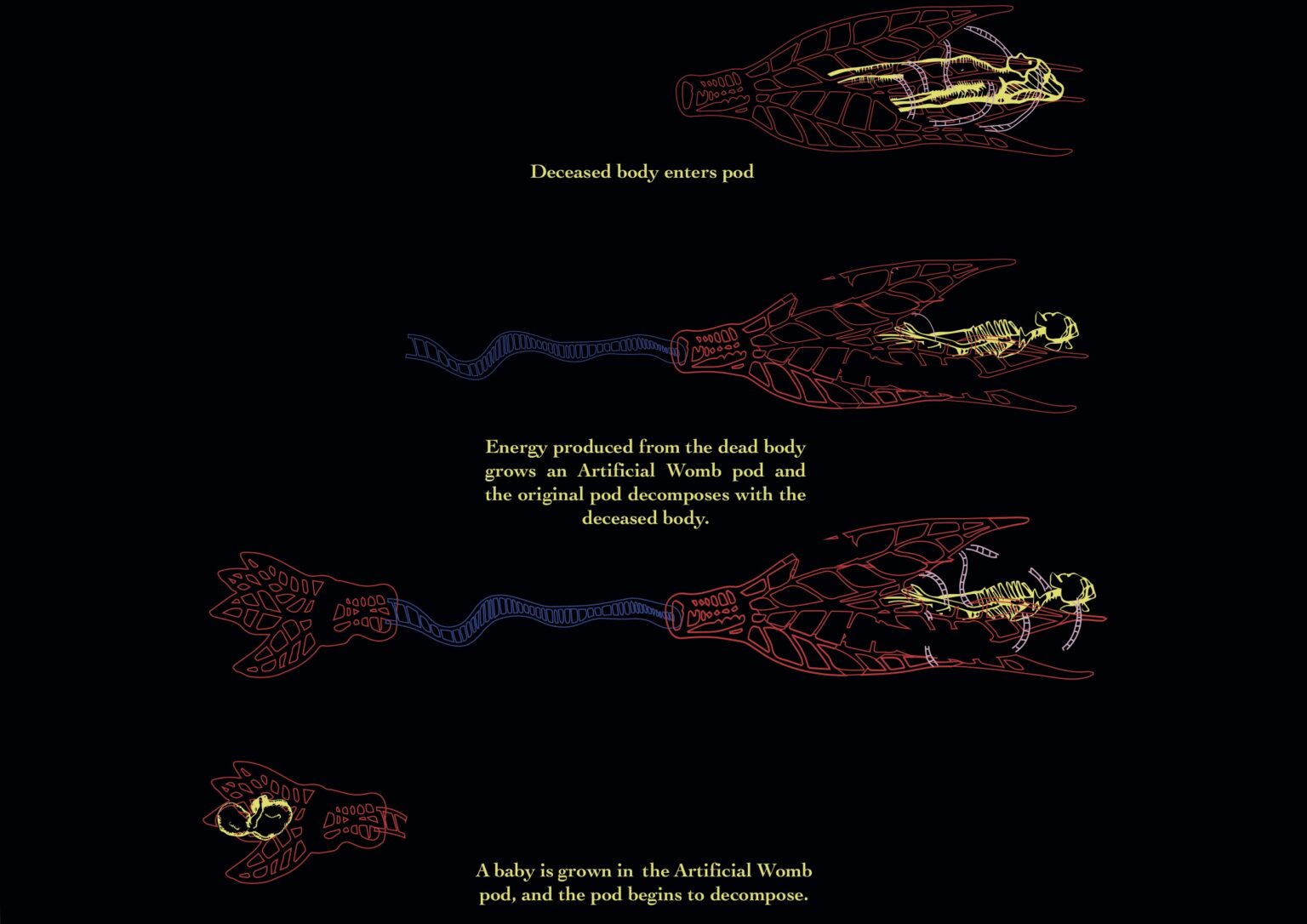 The Metamorphic Pods are comprised of artificial cells which enclose around the body of the deceased. Artificial veins are used to carry the energy produced from the body in order to grow an Artificial Womb through an umbilical cord like structure. Fertiliser created from the parent(s) DNA is implanted into the soil around the Pod, which ensures the child grown is biologically related to the parent(s). Nine months after fertilisation the baby is dug out of the soil by its parent(s) and an onsite Birth doula. As the body decomposes the pod surrounding it begins to decay and once the artificial womb has served its purpose it also deteriorates into the earth, this allows the soil to revert back to its prior state in order to not interfere with the eco system.
11 of 17
Previous Next
Close 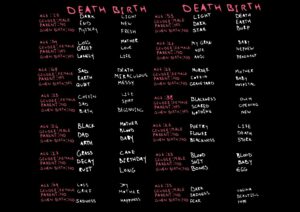 In order to cultivate my Imaginative Drawing process, I felt it necessary to further uncover narratives on Birth and Death which I could then use as inspiration when drawing. I also aimed to explore personal associations of Birth and Death which I could then challenge, celebrate and merge through my design. I did this by creating a word association experiment where I asked friends and family to give me three words they associated with Birth and three words they associated with Death. I chose this method as it embodies a fluid, open approach to research and also inserts the beliefs, feelings and ideas of real people into the project. I made sure to be ethically considerate of the topics I was exploring and asked participants permission to be involved in a study exploring potentially sensitive topics. I made sure to involve participants ranging in age and gender and also to involve those who have given Birth/those who haven’t. 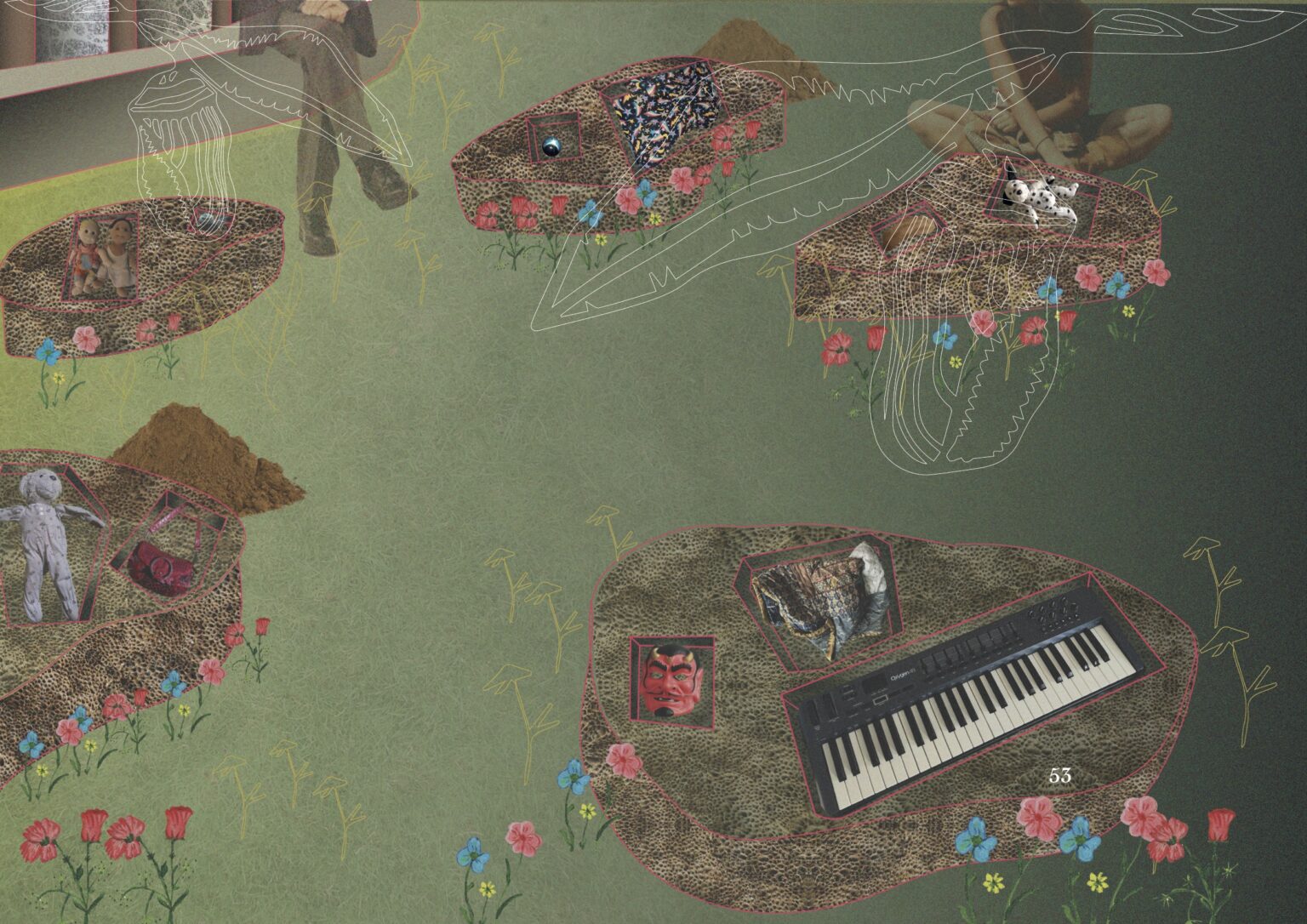 Like the fabric of the building the Decomposing Ornamental Graves are also made of Mycelium. The sentimental objects placed within the graves reflect the identity of the deceased or of parent(s) whose baby has been grown in the space. The objects for the dead can be chosen by the loved ones of the deceased, or by the departed when they were living, the objects are used as gateways to connect, mourn and reflect. The objects for the parent(s) are chosen by the parent(s) themselves and are used as a form of remembrance for their prior life, this breaks the taboo of acknowledging the potential negative impact childbirth can have. The Mycelium will gradually decompose the objects which occupy the graves leaving behind an imprinted fossilised version of the article. As the life cycle of the space proceeds nature will grow in and around the graves and eventually the graves will entirely decay and disappear. This mimics when organisms die in nature and new life in the form of fungi and bacteria begins to grow- this again reiterates the acceptance of nature over our bodies and lives. The design of the Decomposing Ornamental Graves also reflects the vital role of the ornament as a communicative device which further echoes the homage to feminine attributes which is embedded into the design.
14 of 17
Previous Next
Close 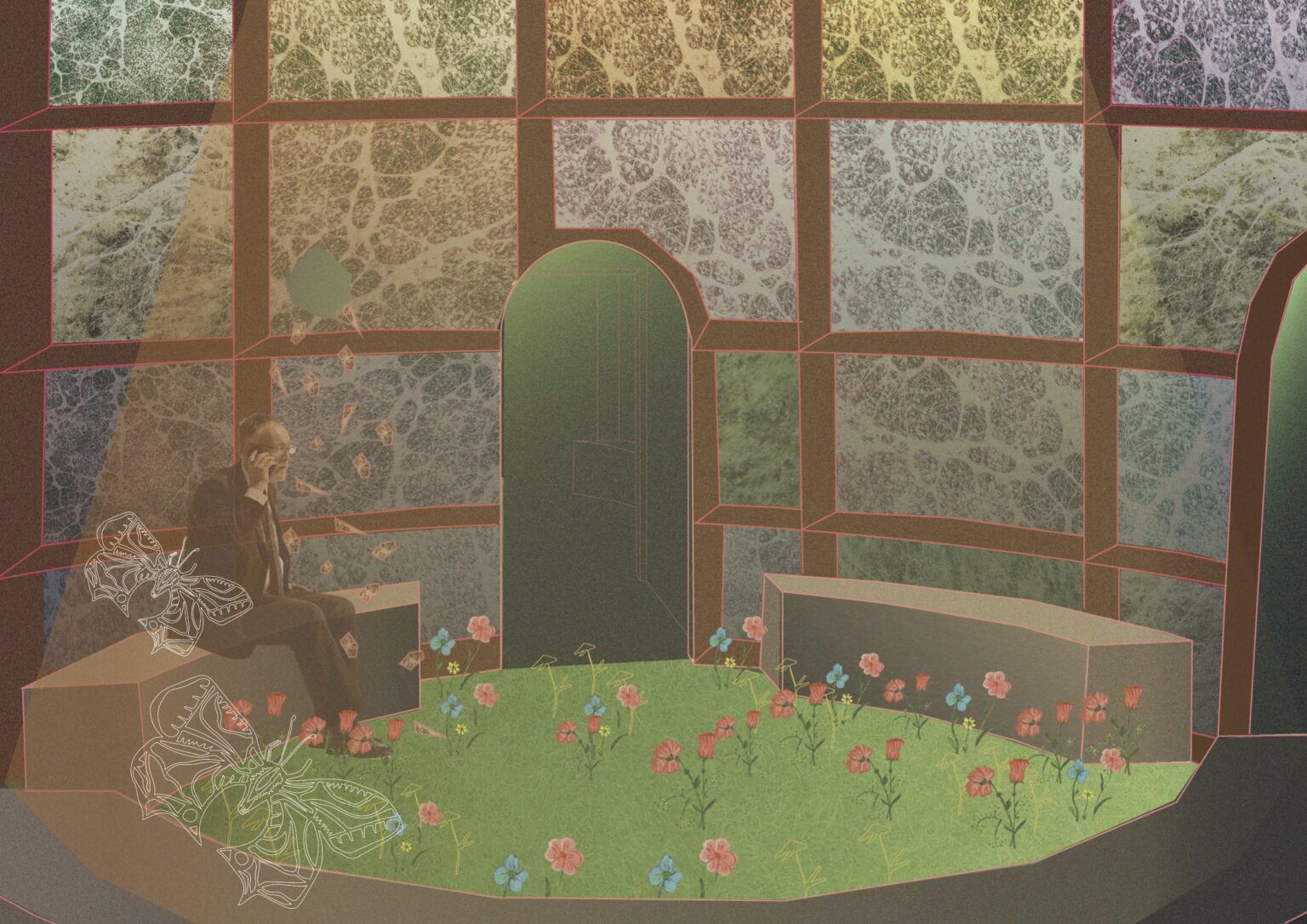 The central part of the building symbolises the womb and is the only enclosed part of the above ground structure. This space is intended for inhabitants when in need of quiet contemplation and reflection. The space has no roof and purely relies on sunlight in order to illuminate the space, the space encourages its inhabitants to look up towards the sky, which is intended to further convey the understanding of being part of a larger eco system and to highlight the beauty in the acceptance of the power of Mother Nature above all.
16 of 17
Previous Next
Close 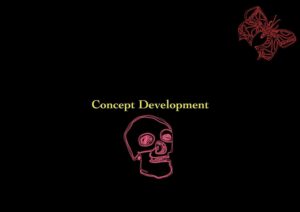