Under the rapid economic development in recent years, human society is highly urbanized, and more public spaces are used as places for human activities to build squares and shopping malls for people to use. In these spaces, countless people come and go, interacting with others. But on a general level, these places are not places where people live, nor do they provide any identity for anyone. It seems that everyone is anonymous and alone in this space, which always seems to be in between the beginning and the end, carrying the people and things that pass by.

This project is concerned with such a liminal space, preserving the traces of people but depriving them of their subjective presence, suggesting human behaviour and the transformation of space caused by people throughout the space. It is a reflection on the space that people live in every day, removing the human subject and contemplating the changes that may occur in the space after all the acts of human transformation.

I have chosen the controversial issue of consumerism as one of the main themes of my space, creating a narrative space to present my views on consumerism and my protest against it. The resulting space is an exploration of the concept of liminal space – how to create the infinite out of the finite? The theme of this project is the intermediate state and what I have done is to explore one of the limits of such an in-between state.

I believe that design is not only limited to serving anyone, but sometimes it is necessary to go beyond the existing design principles and preconceptions to explore more unfamiliar, unknown or pure spaces. Therefore, in this project, I delved further into the relationship between space and people – the creation of a non-positive, even painful, atmosphere. 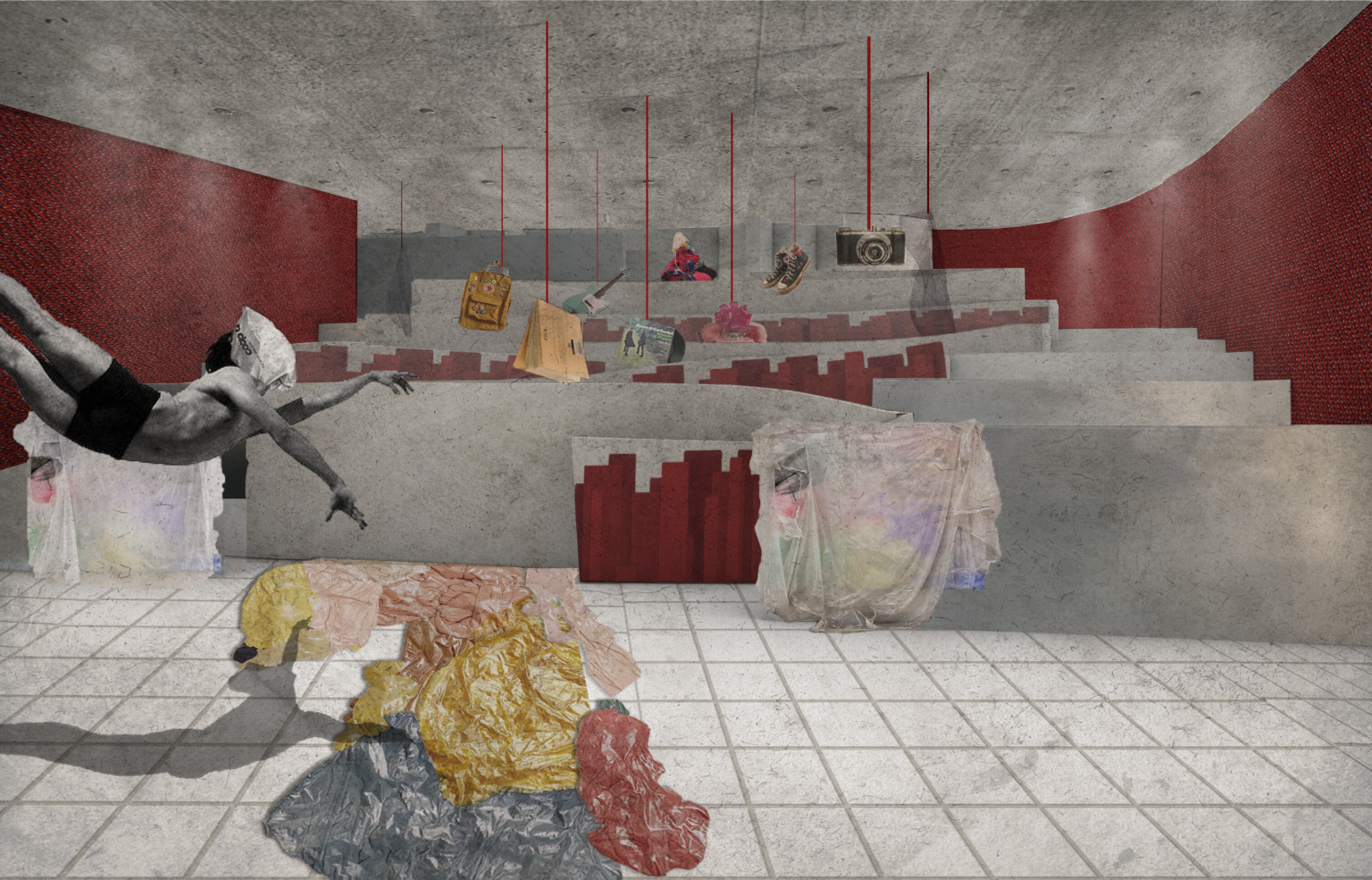 He didn't know where he came from or where he was going, he stayed here, he was drawn here, he fell headlong into the trap and he has been lost ever since.
1 of 7
Previous Next
Close
Graphic content: click to unblur 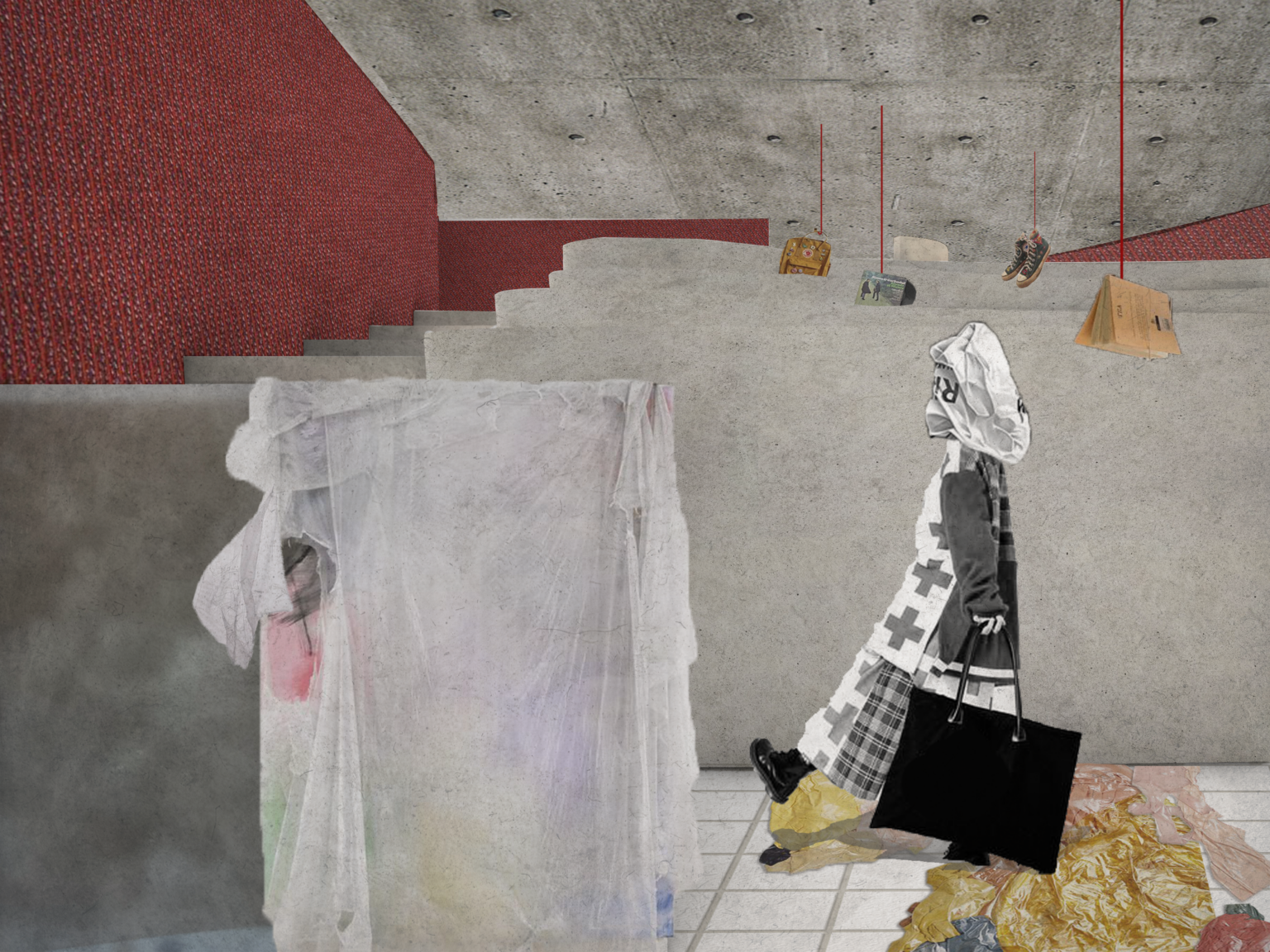 He was blinded, he began to stop thinking, he thought he was stepping into it of his own free will, not knowing that it was all calculated and with ulterior motives. As he goes deeper, he has more and more, and he has since embarked on a road of no turning back.
2 of 7
Previous Next
Close
Graphic content: click to unblur 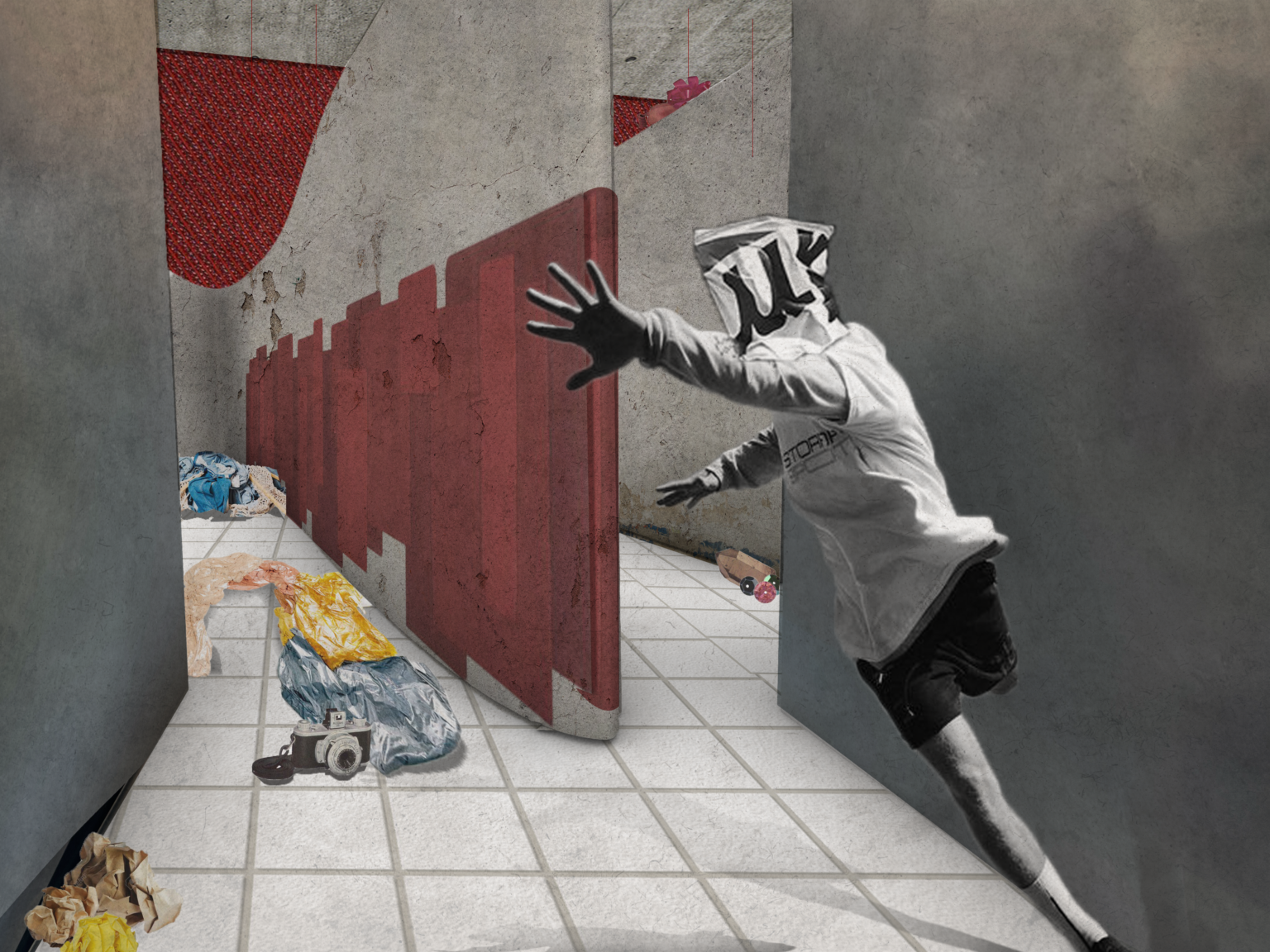 He gradually realises in the repetition of his actions day after day that he cannot seem to escape from all that surrounds him, that he cannot change what he receives. He began to think of escape, he began to try to resist, he began to look for an exit.
3 of 7
Previous Next
Close
Graphic content: click to unblur 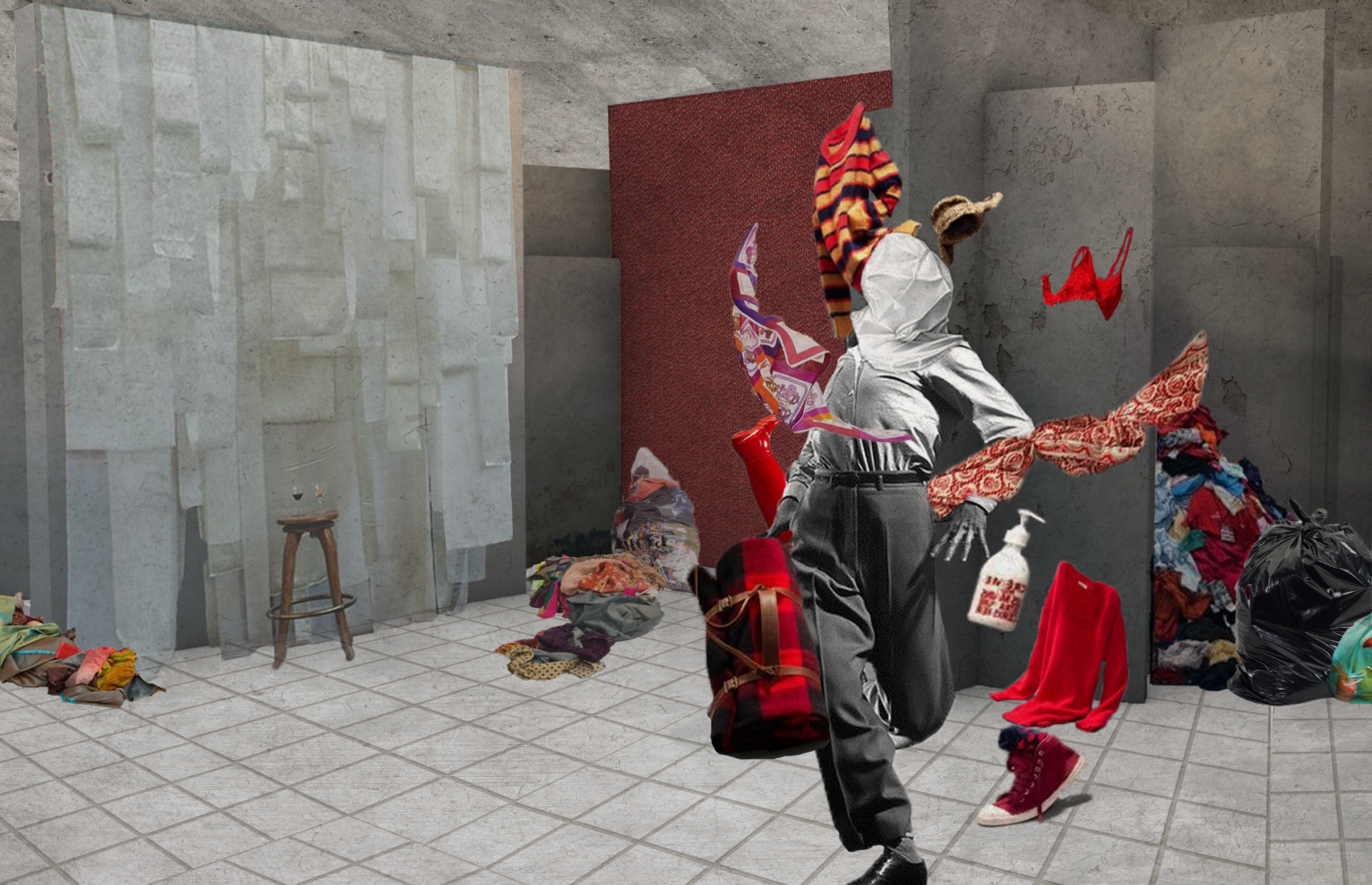 Everything he had acquired before now seemed to be a burden, and he tried to get rid of them, but they still haunted him.
4 of 7
Previous Next
Close
Graphic content: click to unblur 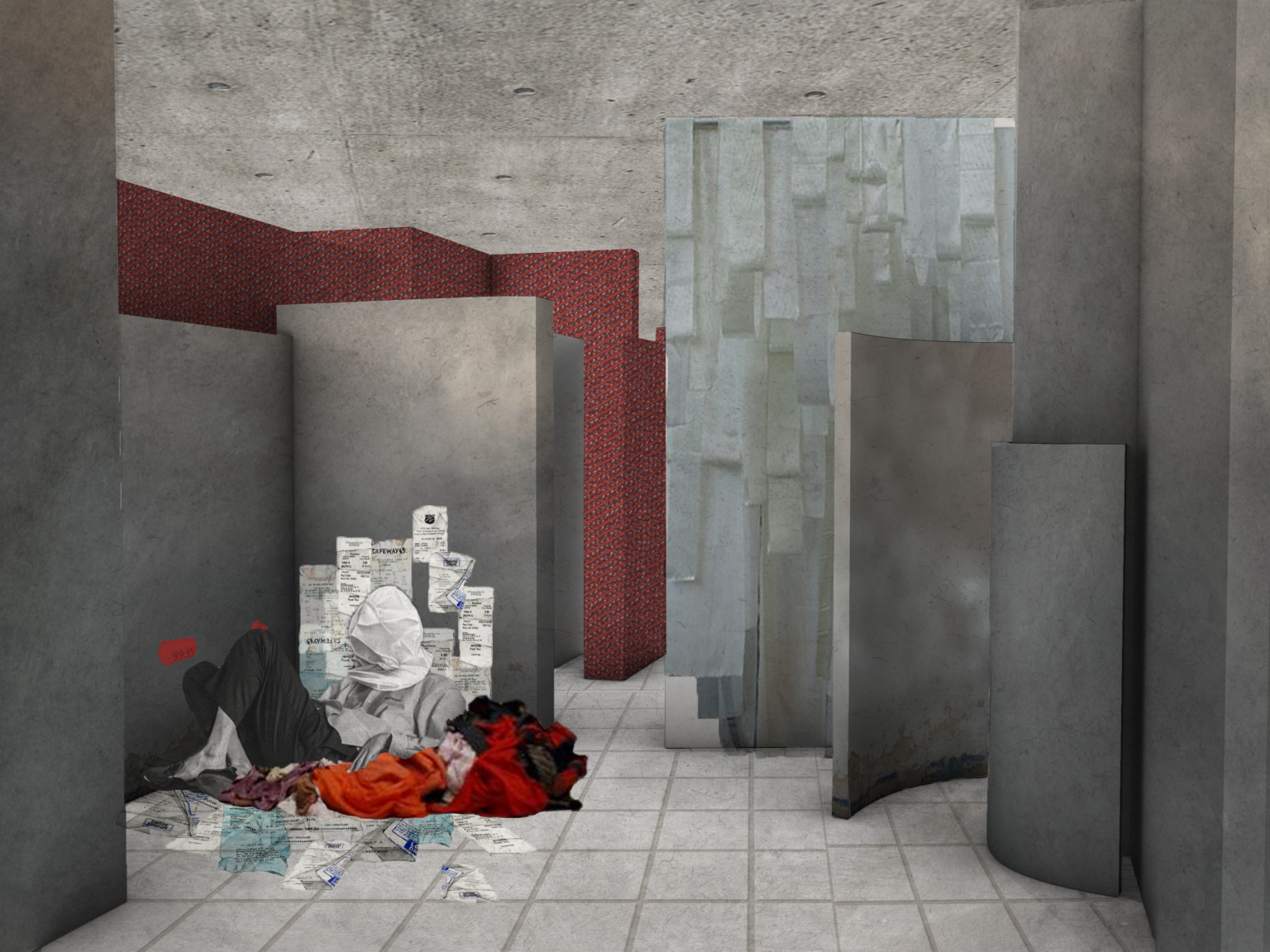 He is constantly confronted with what he has acquired, and his former desires are transformed into a pile of useless clutter surrounding him, not helping him in any way but reminding him of his past ignorance and irrationality. He became frustrated and self-doubting.
5 of 7
Previous Next
Close
Graphic content: click to unblur 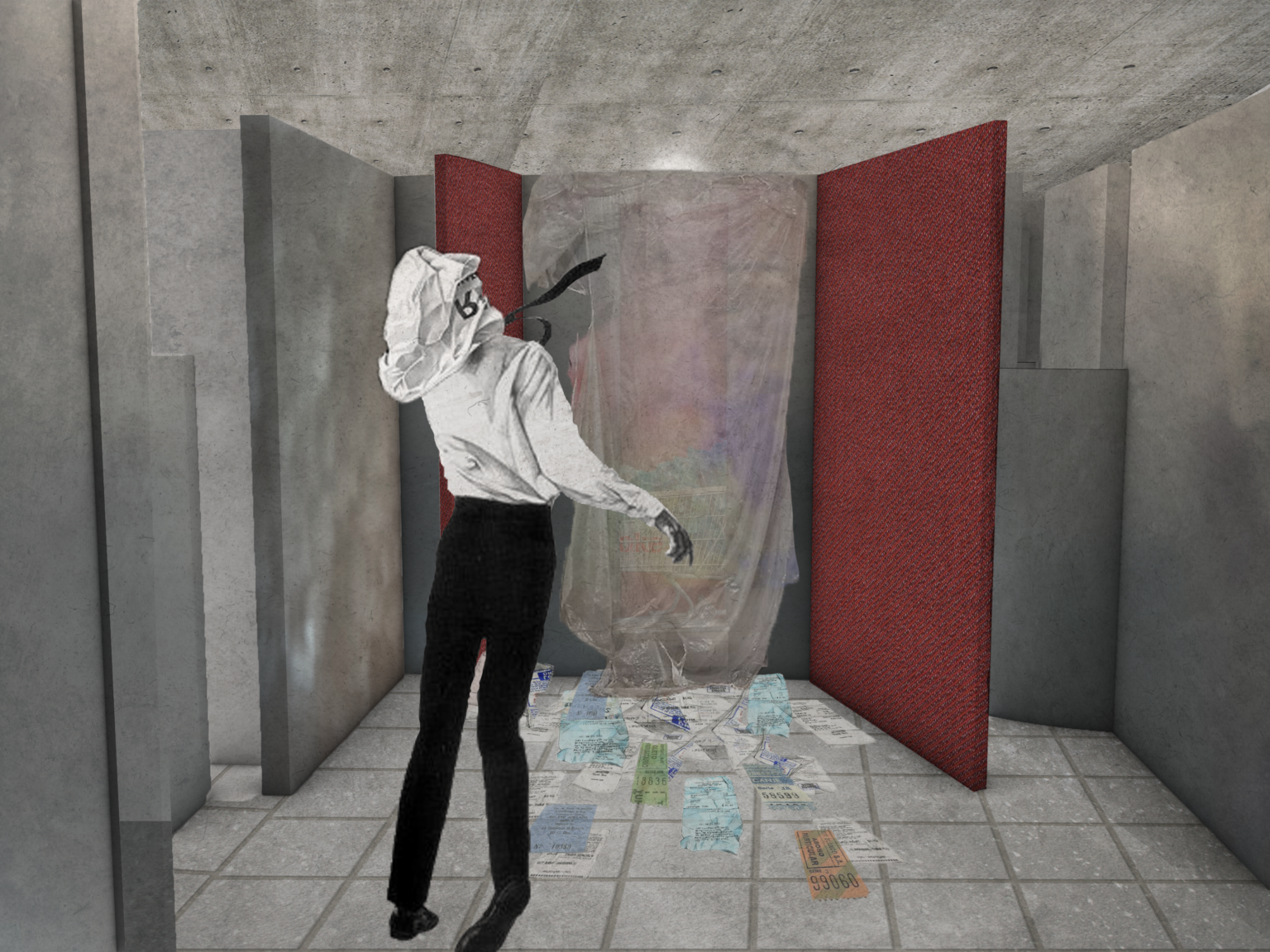 In the dark, he was led in one direction. This time, he did not resist this guidance, but followed and walked toward a destination.
6 of 7
Previous Next
Close
Graphic content: click to unblur 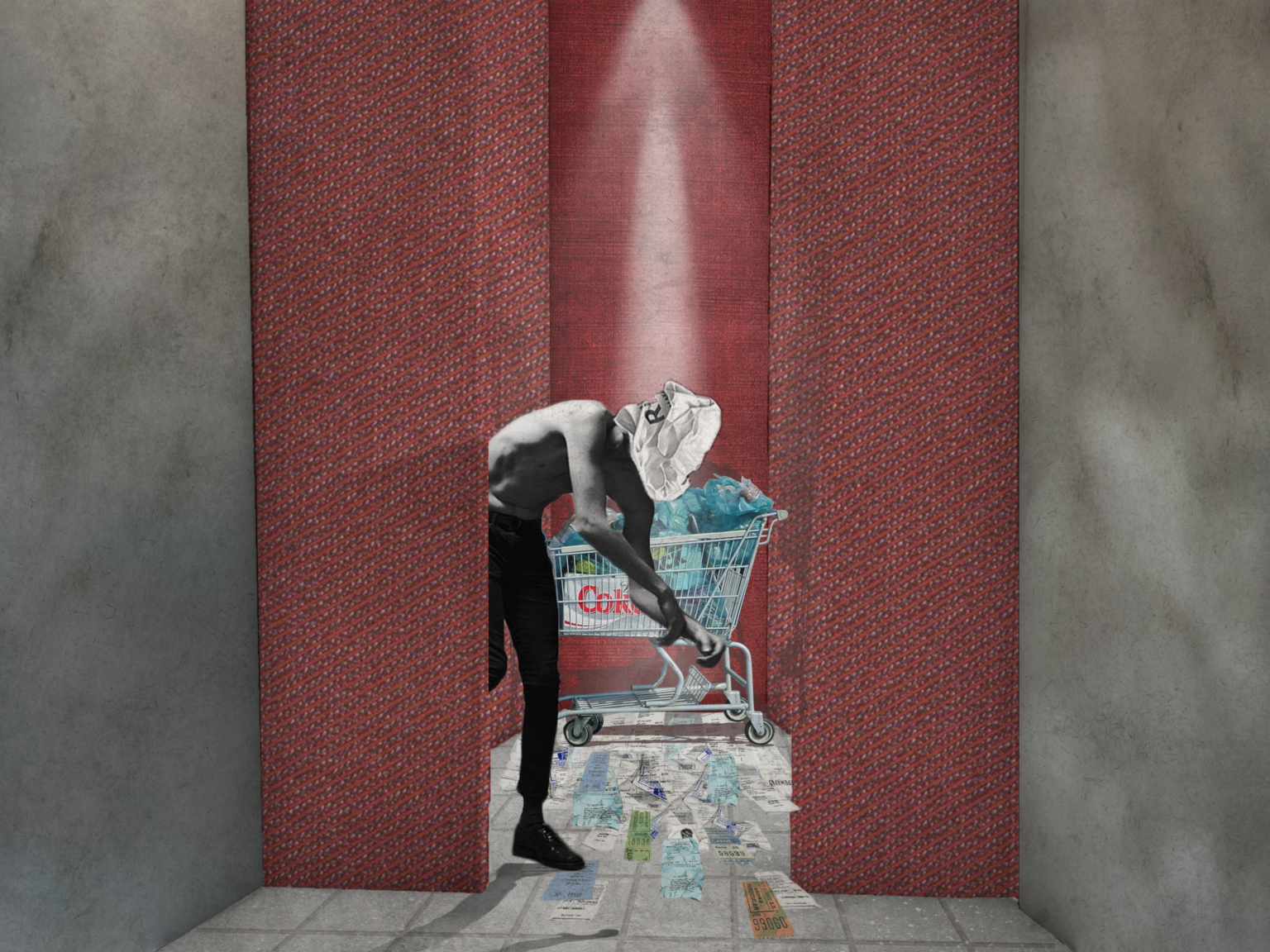 He arrives at his destination, where there is nothing - no goods, no acquisitions, no identity. Here he is just an appendage to the desire to shop, he has no way of escaping, he is just the epitome of the thousands of people who are under the spell of consumerism.
7 of 7
Previous Next
Close