My final project is an attempt to redesign the conversation about gendered unsafety. The world in which more than 736 million women have been subjects to male violence calls for meaningful debate about safety that takes place between people of different genders and positionalities. However, the discussions we currently have are often restricted by the constraints of patriarchy and reproduce the image of women as problems for male-dominated society, highlighting their difficult experience of harassment, victimhood, vulnerability and dependence on male surveillance.

This design-led exploration into gender and safety is grounded in a feminist perspective and builds upon the critique of narratives problematising and victimising women. Instead, it seeks to propose new vocabulary and contexts for discussing the subject while problematising human-to-human interactions and the culture that informs them. The project used co-creation methods to collate multiple definitions of (un)safety and capture women’s lived experience in order to create a sample of the new language for speaking about safety. The outcomes of this process are communicated through the terminology coined during the participatory engagements and the collection of provocations that could be used to facilitate the discussion.

Whereas the project doesn’t promise to solve harassment, it signposts a more equitable format for informal education about safety that goes beyond the simplified frameworks of men – women, perpetrator – victim, protector – protected and invites people despite their gender to collectively renegotiate the meaning of safety itself.

In order to effectively map the status quo, I have traced the academic discussions about safety that revolve around the gendered power relations within safety systems. I have explored the concepts such as the male gaze, safety work, security apparatus and collective accountability that informed the further development of the project.
1 of 7
Previous Next
Close

The crucial part of my exploration was working with women who have experienced gendered unsafety and capturing their lived experience during the Storytelling Workshops. The sessions were designed to evoke a cathartic experience and foster a sense of temporary community between the participants representing different approaches to safety and gender.
2 of 7
Previous Next
Close

Collectively created maps of (un)safety.
3 of 7
Previous Next
Close 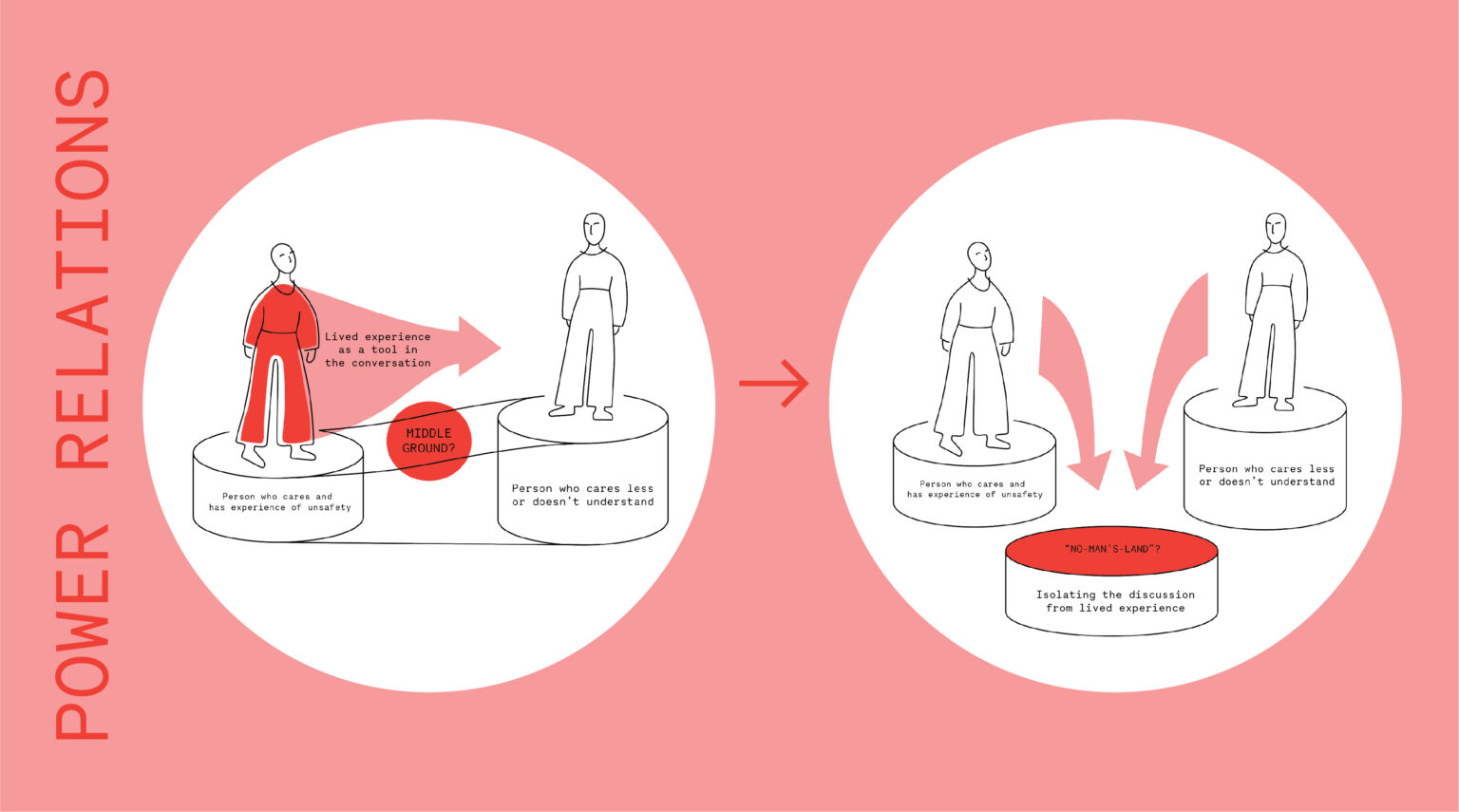 Analysing the conversations with experts and participants helped me realise that women's difficult experiences of harassment are commonly used as a tool to initiate and facilitate the discussion about gendered unsafety within wider culture. My project aims to change the paradigm of this discussion through isolating it from women's lived experience, placing it in a more abstract context and replacing female victimhood and trauma with alternative tools for conversation.
4 of 7
Previous Next
Close 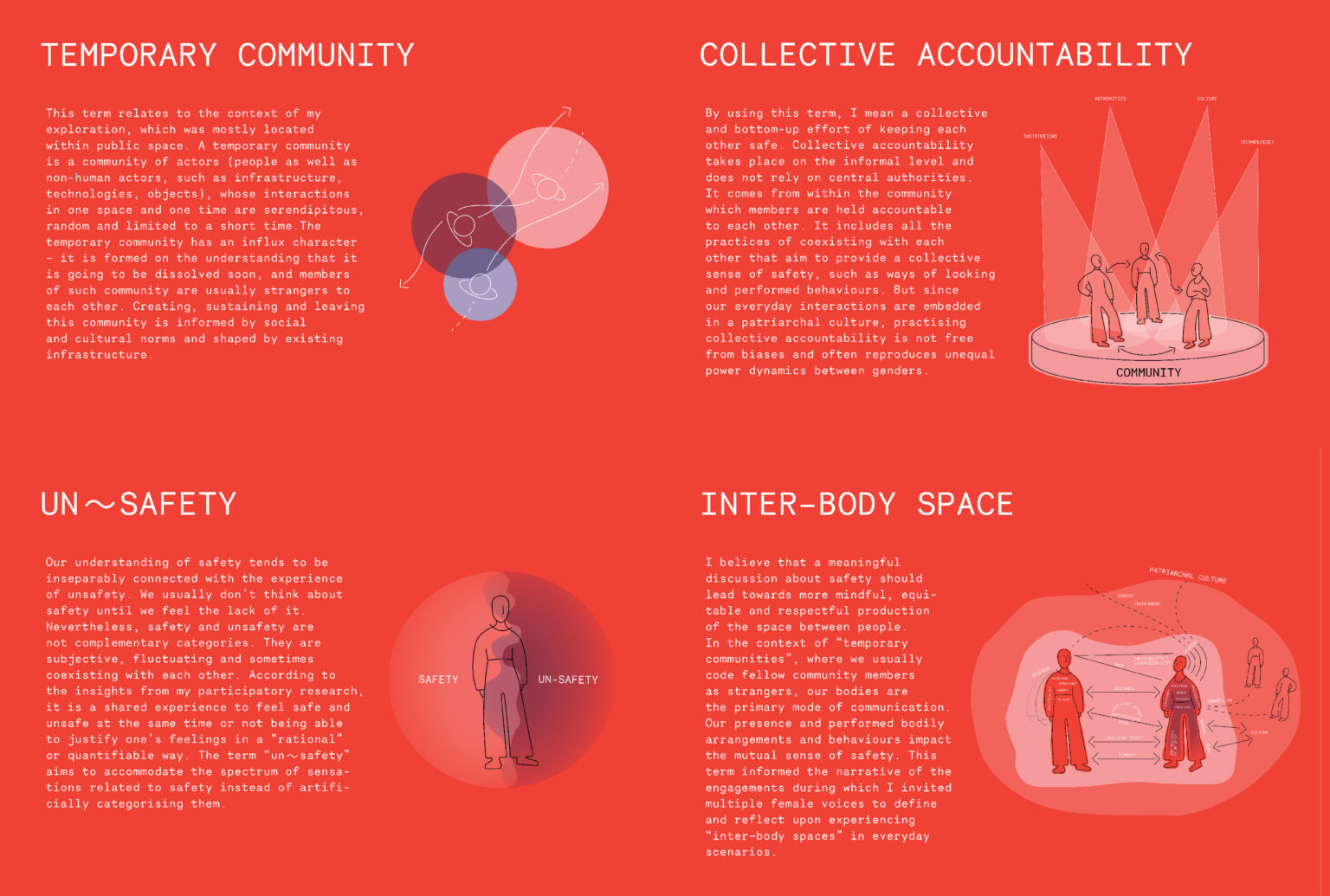 I synthesised my research findings in the form of a visual glossary containing the vocabulary designed during the engagements. In this way I wanted to propose change also on a linguistic layer and steer the conversation about safety towards sensations, experiences and interactions.
5 of 7
Previous Next
Close 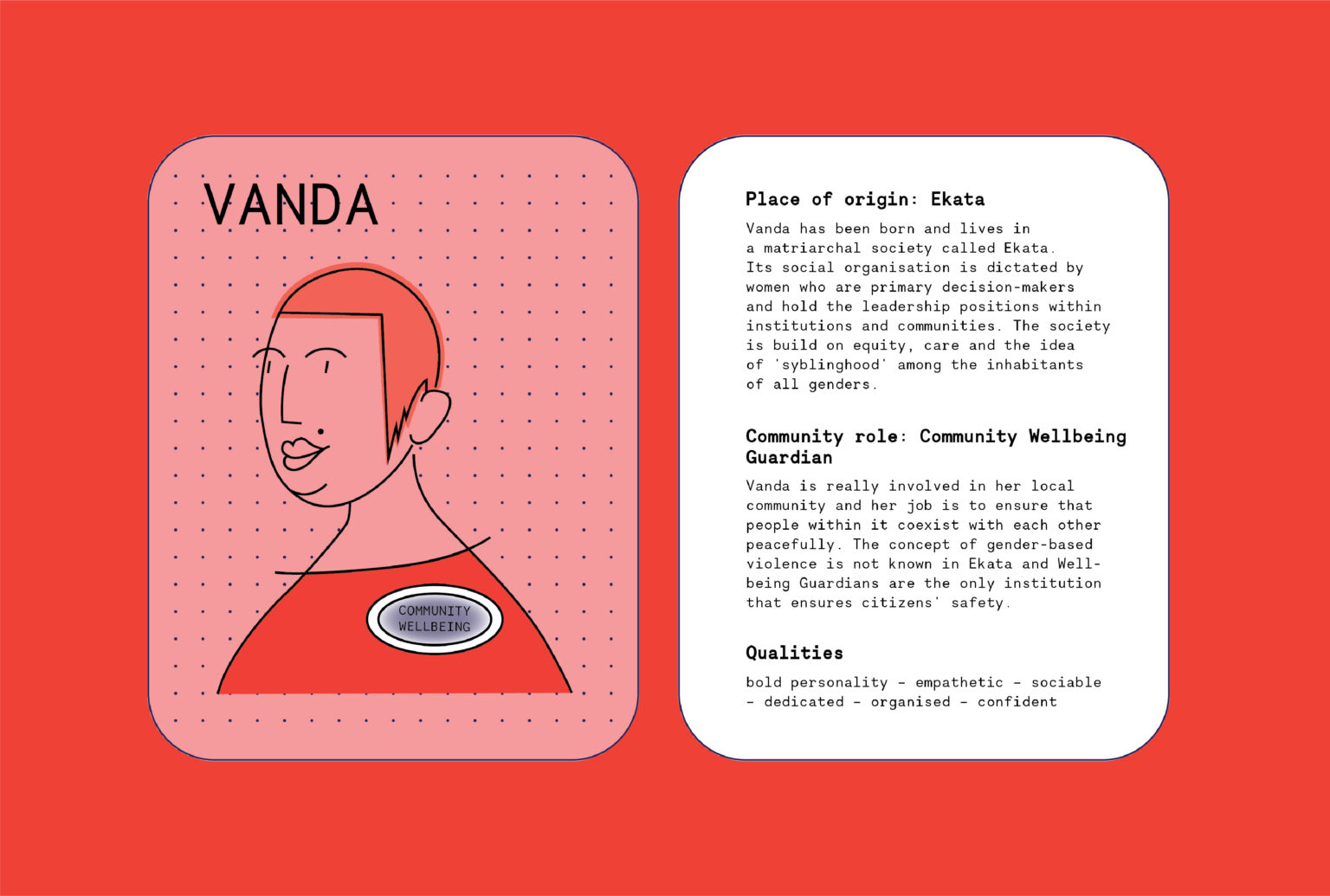 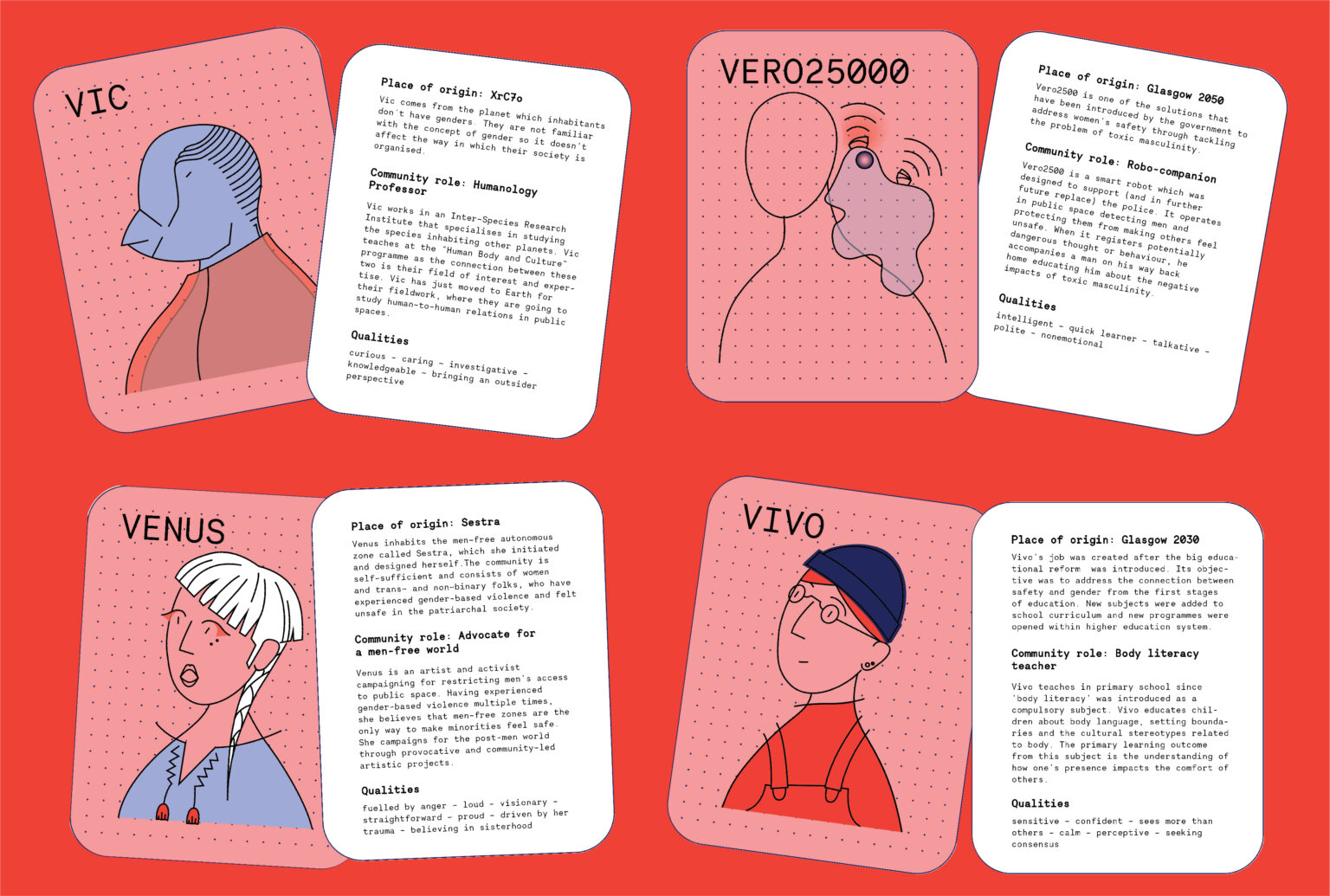 I designed a collection of abstract personas and transformed them into the set of conversation provocations. The characters were built upon the insights from the engagements, representing hypothetical responses to the experiences of gendered unsafety shared by my participants. The provocations render non-existent, imaginary scenarios related to safety and gender that can distance the conversation from the experiences of harassment and remove the sides taking part in the interaction from the typical gender roles culturally ascribed to them. The concept could be further developed and applied as a part of social campaigns, an addition to active bystander education methodologies, a tool used within citizen engagement projects or a communication tool within informal conversations.
7 of 7
Previous Next
Close