A selection of a few of my etchings produced during my time of study here at GSA. Etching is probably my preferred medium due to the repetitive nature pairing well with my use of recurring motifs and characters, as well as the traditional and meticulous nature creating a fun contrast between the disgusting and offensive imagery and subject matter. I have always been a fan of toilet humour regardless of whether it is perceived as ‘childish’, and I enjoy the juxtaposition of studying art at a higher education level and working with high-risk materials and creating the work I make, with the result arguably bordering on the deranged whilst retaining that comical, lighthearted edge. This reminds us that there is still a funny side to some of the downfalls we may face. One of my favourite ways to produce an etching is through using chine-colle; I have often used newspapers within my practice due to their relevance in society, biased nature and possessing the element of the ‘found object’, and I have found these work especially well within the absurd yet political aspects of my practice, as well as adding an interesting contrast against the etched lines.

The Big Bastard – a balaclava-clad humanoid figure – is a prominent figure within my practice, representing a physical manifestation of everything wrong in humanity as well as myself. I came up with this motif around early 2020, and as time has gone on it has devolved into something even more revolting and monstrous as time has gone on. This nods to the sense of disillusion I have often felt with age, whether it is something physical, or simply becoming more aware and outraged yet desensitised to reality.

Additionally, other characters often make appearances, whether they’re alongside the Big Bastard(s), each other or characters in their own right. Bananas have been a recent recurring theme simply due to the visceral disgust I have had towards them ever since I was a child, and I am finding the humour within that. Flies are another common character; I have been fascinated by them since childhood, and due to their association with disease, decay and pestilence, I found them an appropriate motif to play with during the continuous presence of coronavirus. Similar to the Big Bastard, they became more bloated and festering as time went on. 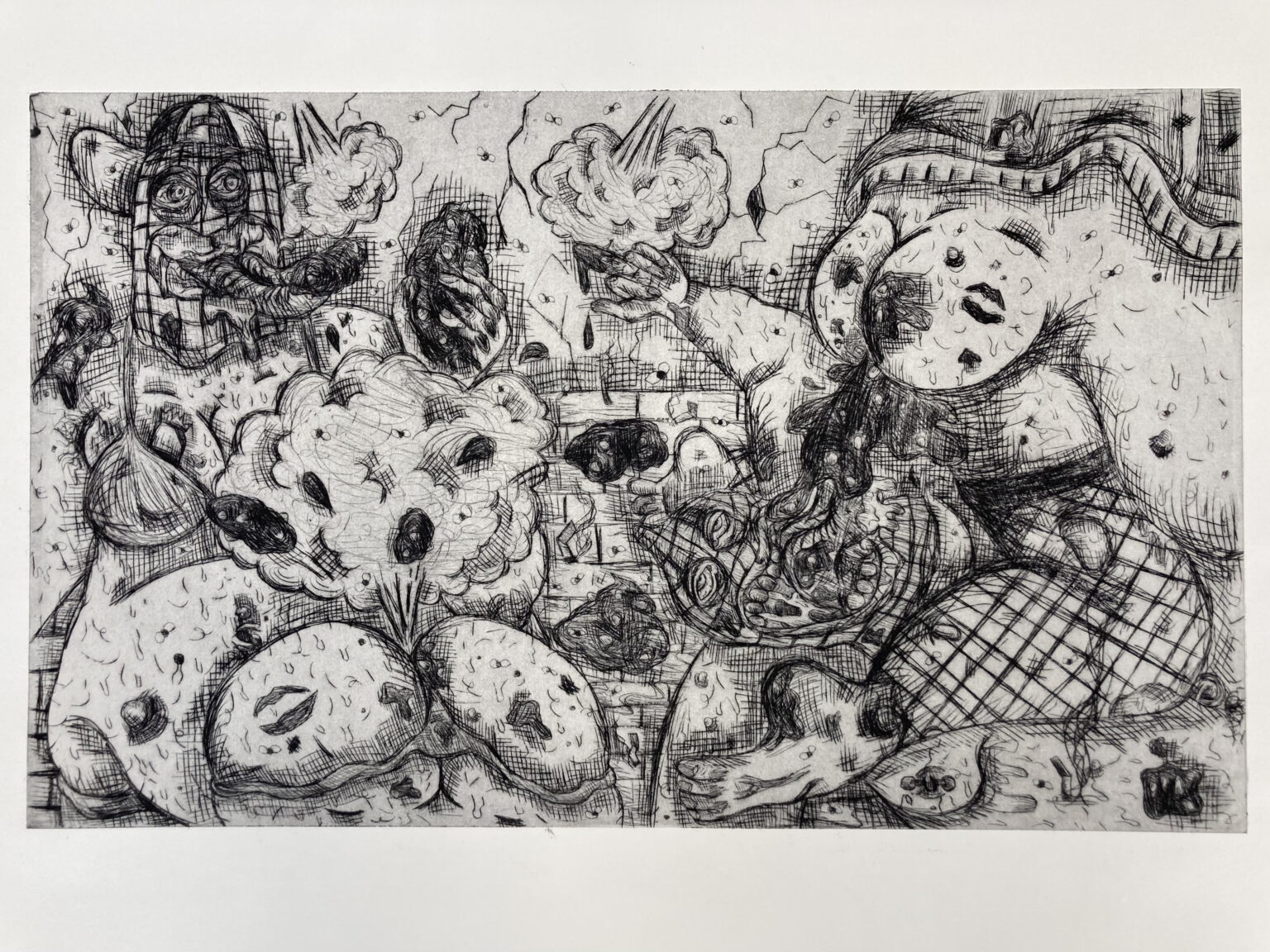 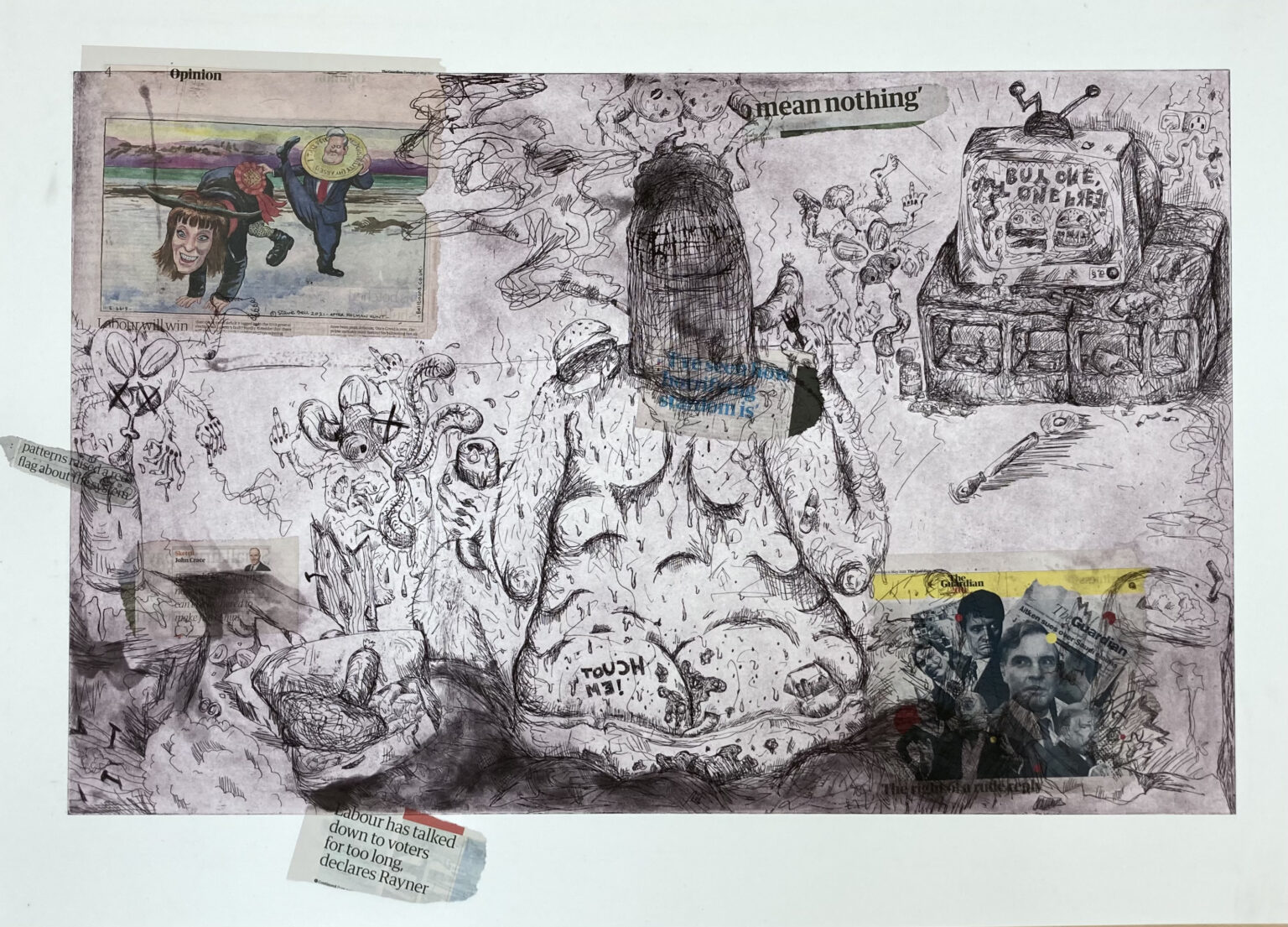 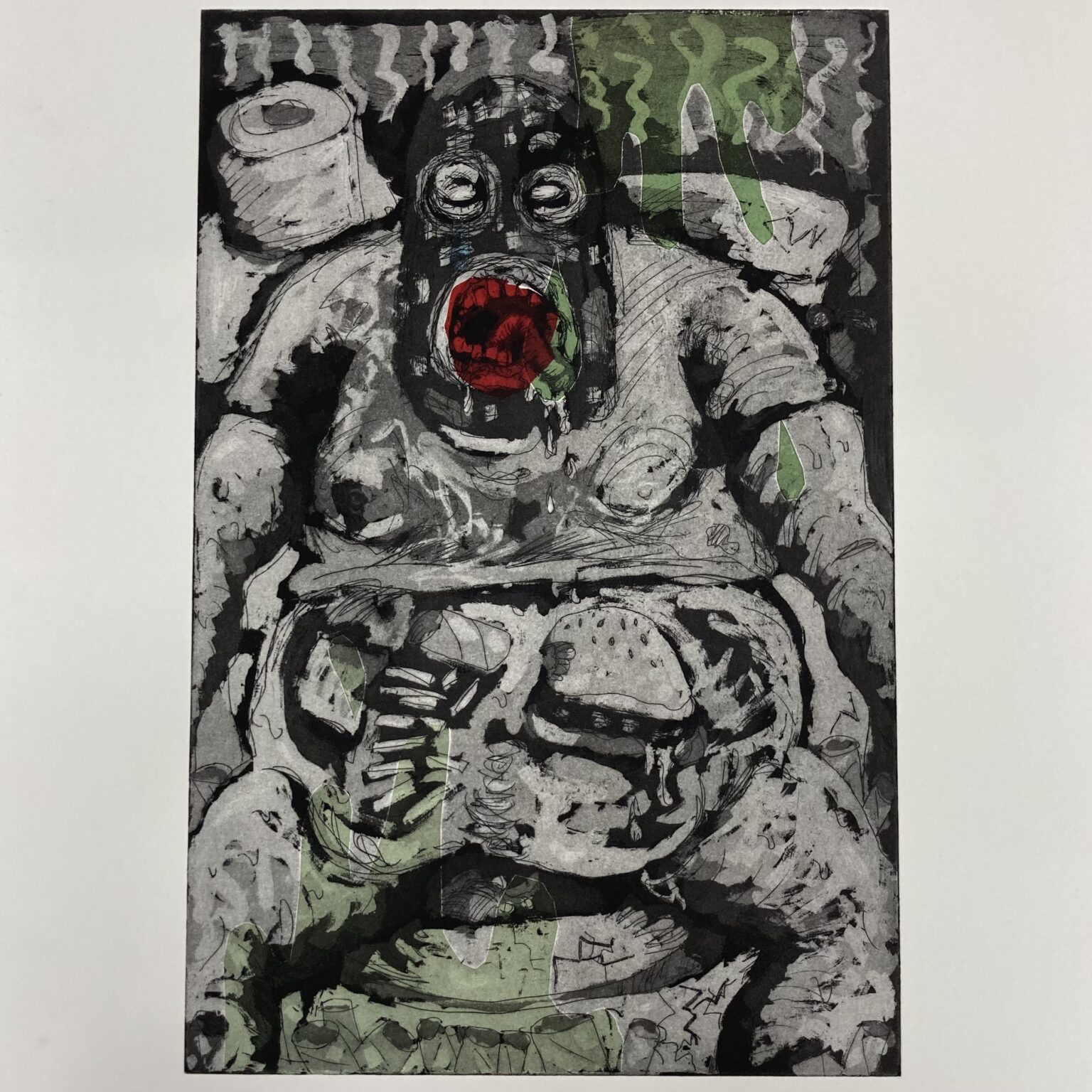 Etching and aquatint on Heritage, approximately 28 x 19.5 inches
For Sale: £200 (more print variations available on request)
3 of 6
Previous Next
Close 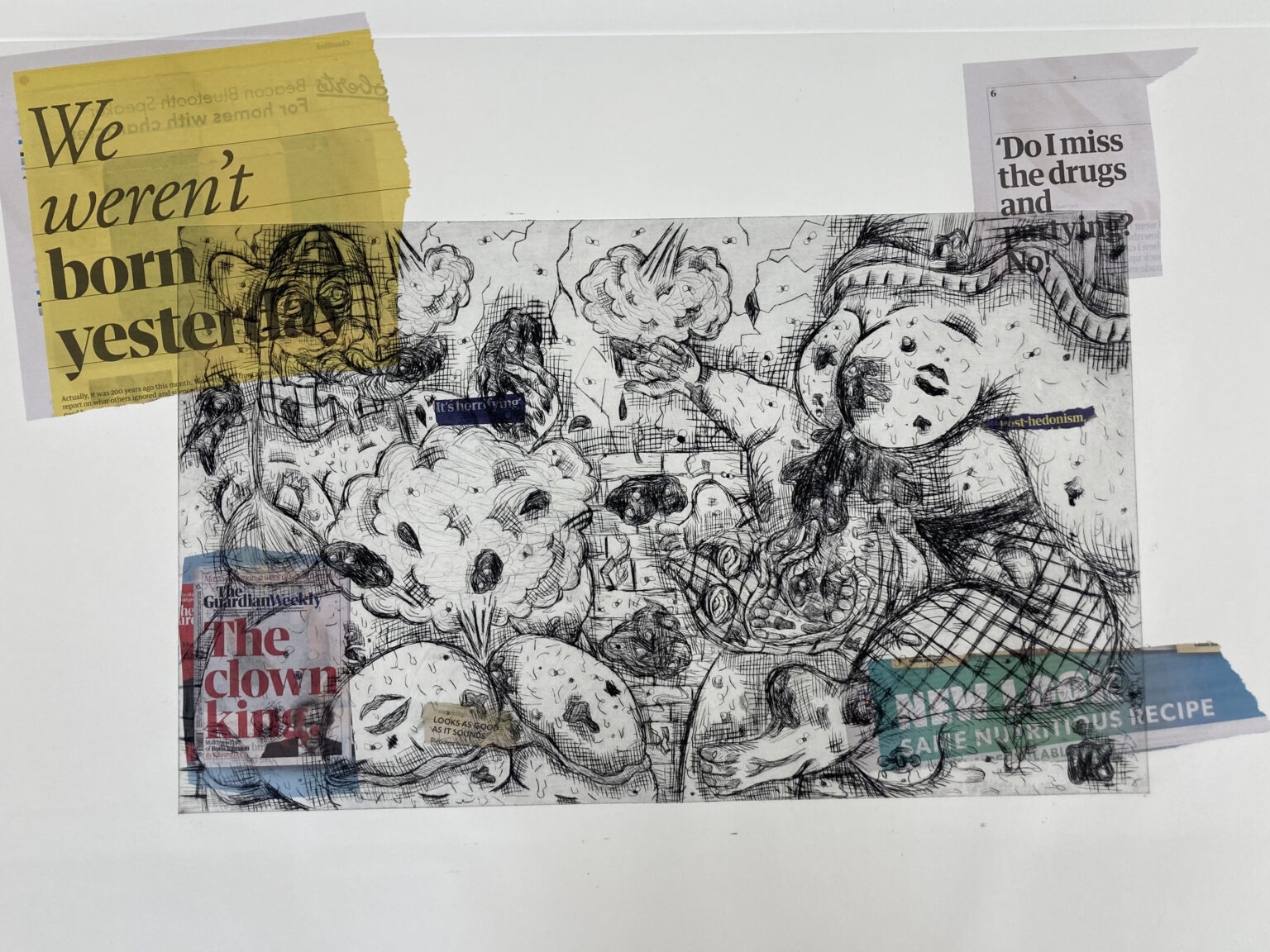 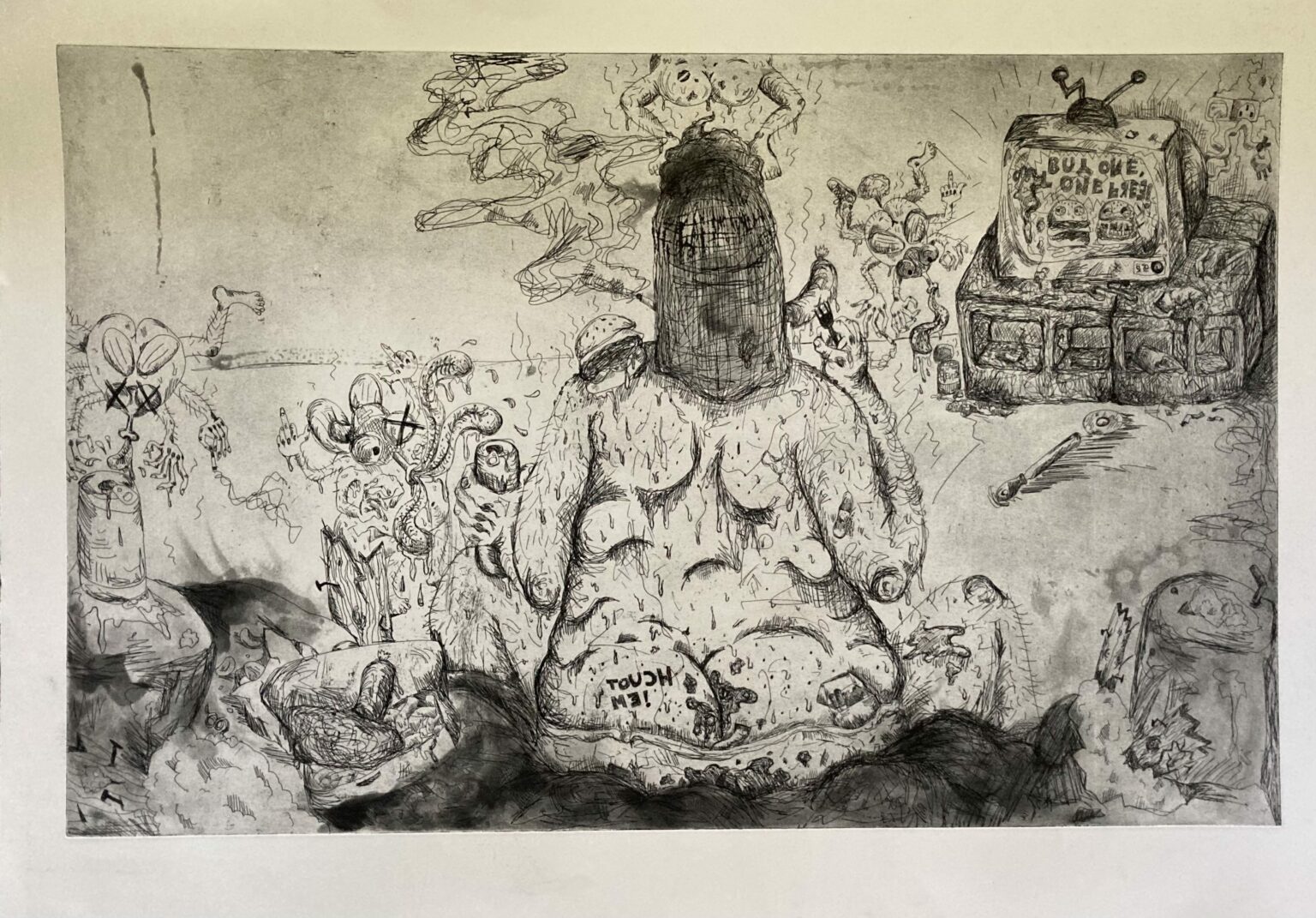 Etching and aquatint on Hahnemuhle, approximately 45 x 29 inches
For Sale: £500 (more print variations available on request)
5 of 6
Previous Next
Close 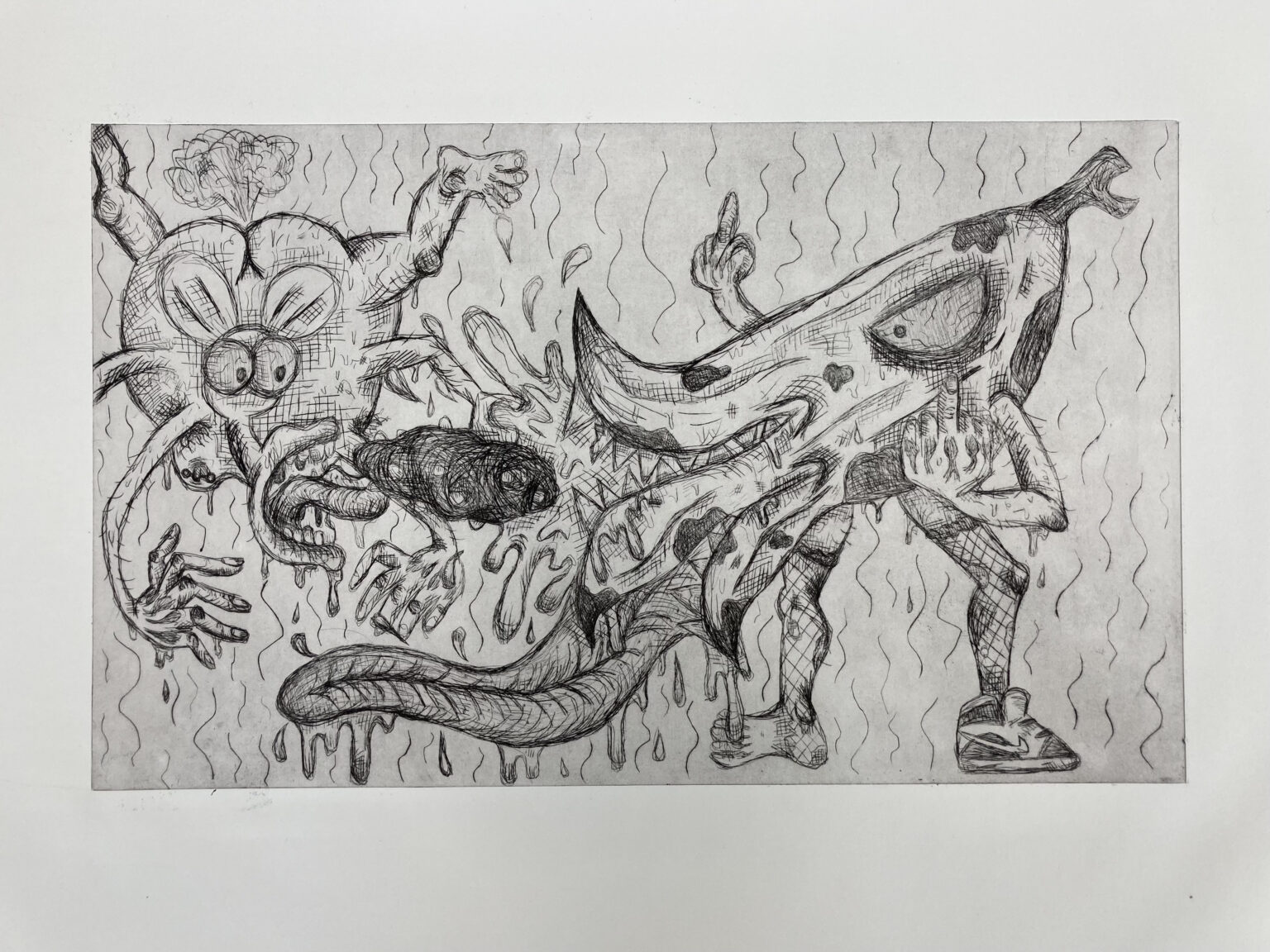