This is a project about “body shaming”, from the Indian “breast tax” to the “body positivity” social movement, people’s minds are advancing, some people are committed to equality for all, challenging beauty standards, building positive body image and improving confidence and saying no to  body shaming. This project focuses on the diversification of silhouettes and the study of its plasticity. I have explored every structure of the body and they are so wonderful and deserve our praise. In order to make the audience focus on the structure, I chose black and white as my main colors. In order to further understand the human body, I referred to many Biological journals, starting from the perspective of anatomy.The whole process involves a lot of hand painting, using pencil, watercolor, oil painting and needle pen, in order to achieve different textures of different parts. The three batches of silhouettes are derived from three parts — organs, bones and brains. The interesting structures are selected, and a large number of shapes are obtained before drawing. Due to the special shape of the human body structure obtained, I also chose a variety of special materials to test the feasibility of the silhouette in the later modeling and fabric research, such as gypsum, 3D printing , heat shrinkable sheet and so on. After a lot of experiments, I finally think the fabric made by the 3D printing pen has got satisfactory results. In addition,I also got a lot of usable silhouettes and surfaces by using the method of winding lines. The final samples are similar to 3D printing in that they are all mesh effects, but the difference lies in the hard and soft fabric.Just like the structure of the human body, it is a combination of “hard” and “soft”. I hope to present different textures to the audience through different materials. On the other hand,the combination of different materials can increase the ornamental quality of the garment.
In the process of half a year’s work, my hand drawing ability is the skill I am most proud of, and my  ability of free draping has also been improved after a lot of work. However, I am also very aware of my shortcomings. For example, I neglected the quality of my photos and failed to show my works to the audience perfectly. For example, I couldn’t concentrate in the early stage of the project, so I spent a lot of time doing some useless research and experiments.But for me, these are valuable lessons that will help me avoid the same mistakes in my future work.

Responsible Statement
The first thing that comes to mind is the promotion of equality. In my opinion, fashion designer is not only designing beautiful clothes, but the most meaningful part of this profession is that the designer conveys his position and feelings to the audience through the display of clothing series. In other words, famous designers have a direct proportional influence.

So designers should carefully decide on the theme of each collection. Get the right ideas across to the audience. It’s the designer’s responsibility. And “equality” is what human beings have been pursuing but have not fully realized. So I think promoting equality is one of the most important themes.

We’re lucky to be born in an enlightened age where people are not afraid to speak up for themselves and there are many modern designers who speak up for equality, like Rei Kawakubo and Vivienne Westwood. Both have spoken out for the “female body.” Body shaming has been around for a long time,Ancient India even levied a “breast tax” on women.Although things are much better now, “body stigma” still exists，as some people still mock fat women and others hate short men. In fact, whether it is a man or a woman, fat or thin, we should all be treated equally. In order to eliminate these prejudices, we still have to fight for ourselves.

Inspired by the historical issue of the “breast tax,” I focused my project on the study of the bodies. I did in-depth research on all parts of the human body, from the bones to the organ, and each part had a lot of interesting features. Among them, Darwin’s study of human body helped me a lot. I felt the charm of human body structure from his sketches. And Aitor Throup’s body cast was also very useful for me. In the course of my research, these research methods and the amazing human tissue have encouraged me to draw many wonderful silhouettes.

After drawing all kinds of structures by hand, I think the human body is so exquisite that each body deserves to be praised rather than humiliated. I have conducted a variety of experiments to show different textures of the human body, and I want to show the audience amazing samples from my projects, I want the audience to understand and recognize that the human body is beautiful and great，to promote equality in the world and stop body shaming. 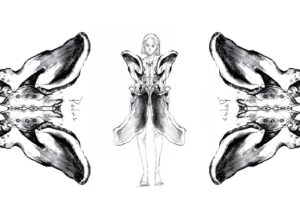