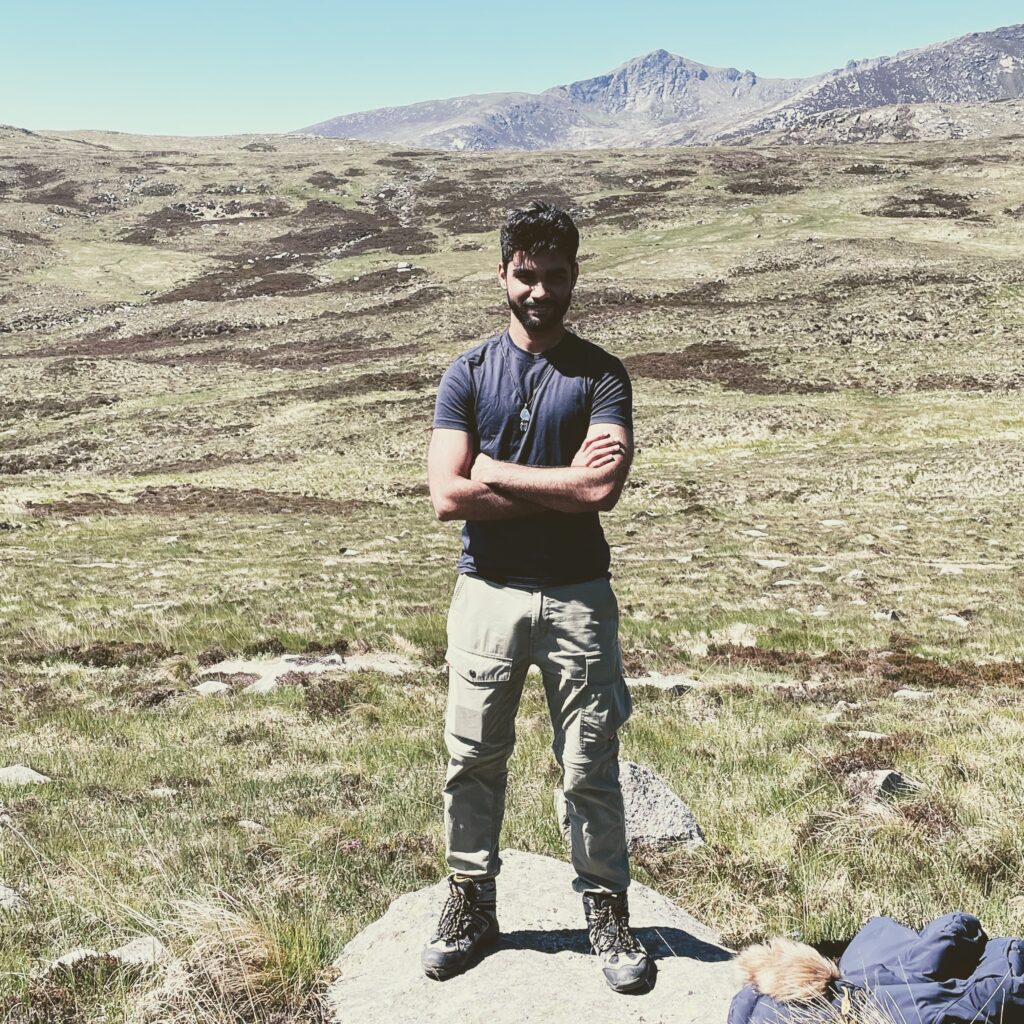 I am a product design engineer with a bachelor’s in mechanical engineering. With the combined knowledge of the two studies, I can comprehend product design as a whole. That is the inner workings and the interface design. Furthermore, I learned the soft skills of communication, project management, and enterprise during my two-year tenure working as a Business Operations Associate at ZS Associates.

As a boy, I spent long periods reading about superheroes and playing video games that sparked my interest in learning about the world and ‘how stuff works’. This started a passion for building things with LEGOs that holds my interest to this day.

My spatial thinking and imagination support ideation and simulating concepts in my head before prototyping and help reduce rework. I’m inspired by what could be, over what is which leads me to technologies that are futuristic while I attempt to solve today’s obstacles.

My interest in this materializes from the realm of cyberpunk-inspired gaming and being a climber myself.

The predominant objective of this project is to create a powered device that may aid humans in survival. To that end, research was
conducted into existing developments and current apparatus available in the activity of climbing. Following this research, it was identified that most forms of exoskeletons or similar instruments were intended for military, medical, or construction utilization. It was determined that fabricating an exosuit would be an appropriate solution for aiding climbers as it may incorporate functions of multiple existing types of equipment that are in use.

After discussion with a few expert and amateur climbers, the requirements of the device were set up and a prototype concept was created for review. Unfortunately, I was unable to contact rescue workers for comments.

The technology to be used in the product was ascertained via pre-existing and further research into actuators and human anatomical structure. A final prototype was created with improvements based on the recommendations received via review. Here inputs from peers and project guides were also inculcated into the design wherever possible. While a few suggestions were retained for future prospects.

User testing was not carried out as the current technology does not allow for the creation of a functional prototype.
However, feedback was taken and a scale model was created to illustrate the concept physically.

The product was named Juggernaut.

Juggernaut is an actively powered equipment that enhances human physical/survival capabilities
when present in harsh terrains such as mountain climbing.

This product improves endurance, leading to alleviating physical effort involved or expediting the activity
It is designed for mountain climbers and mountain rescue personnel.

It is intended to be used in mountainous regions, where the harsh climate and terrain may affect
human survival.

The product would ideally be used during climbing when improvement in endurance is required or a
rapid climb is needed for rescue. 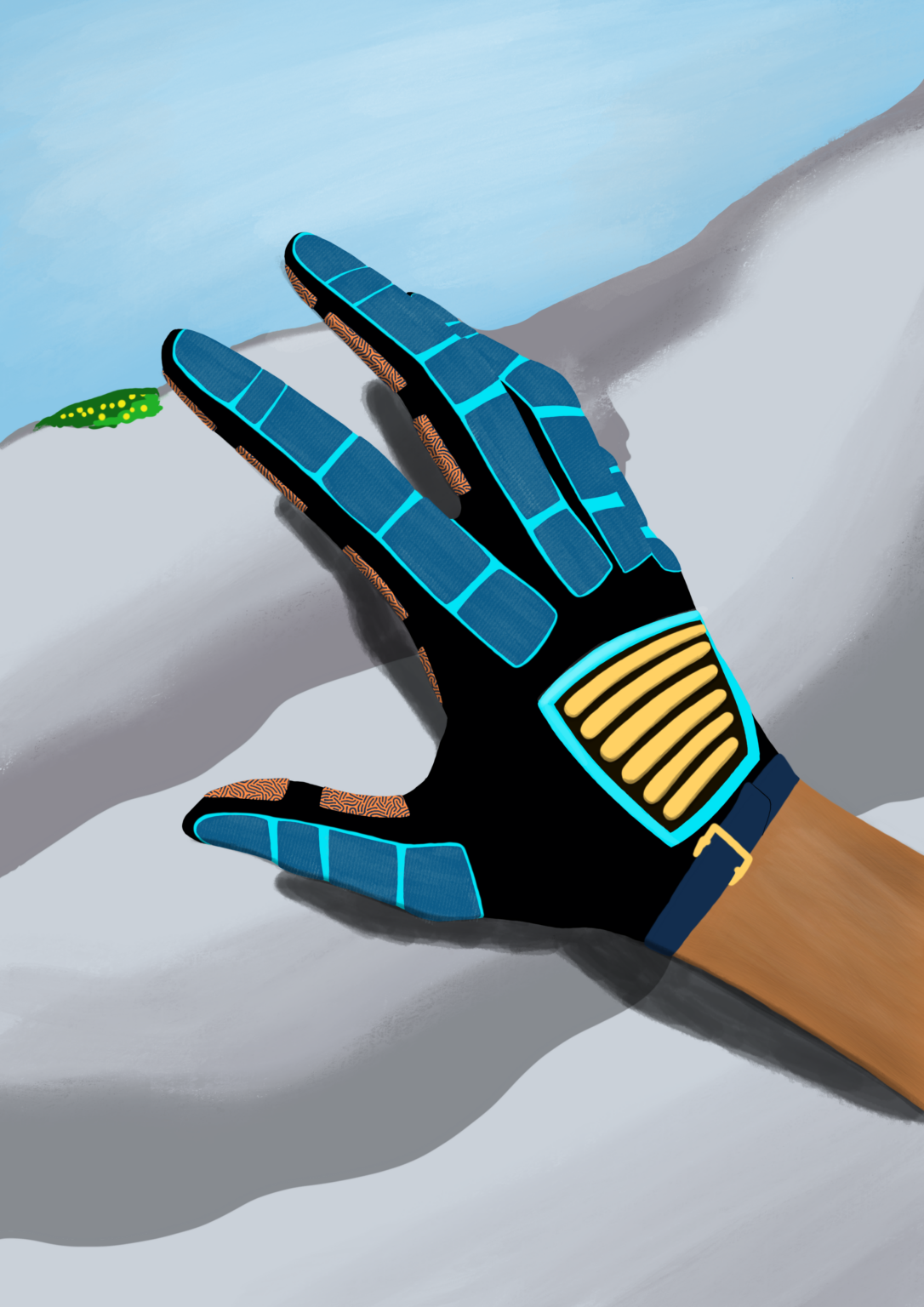 The gauntlet in action
1 of 6
Previous Next
Close 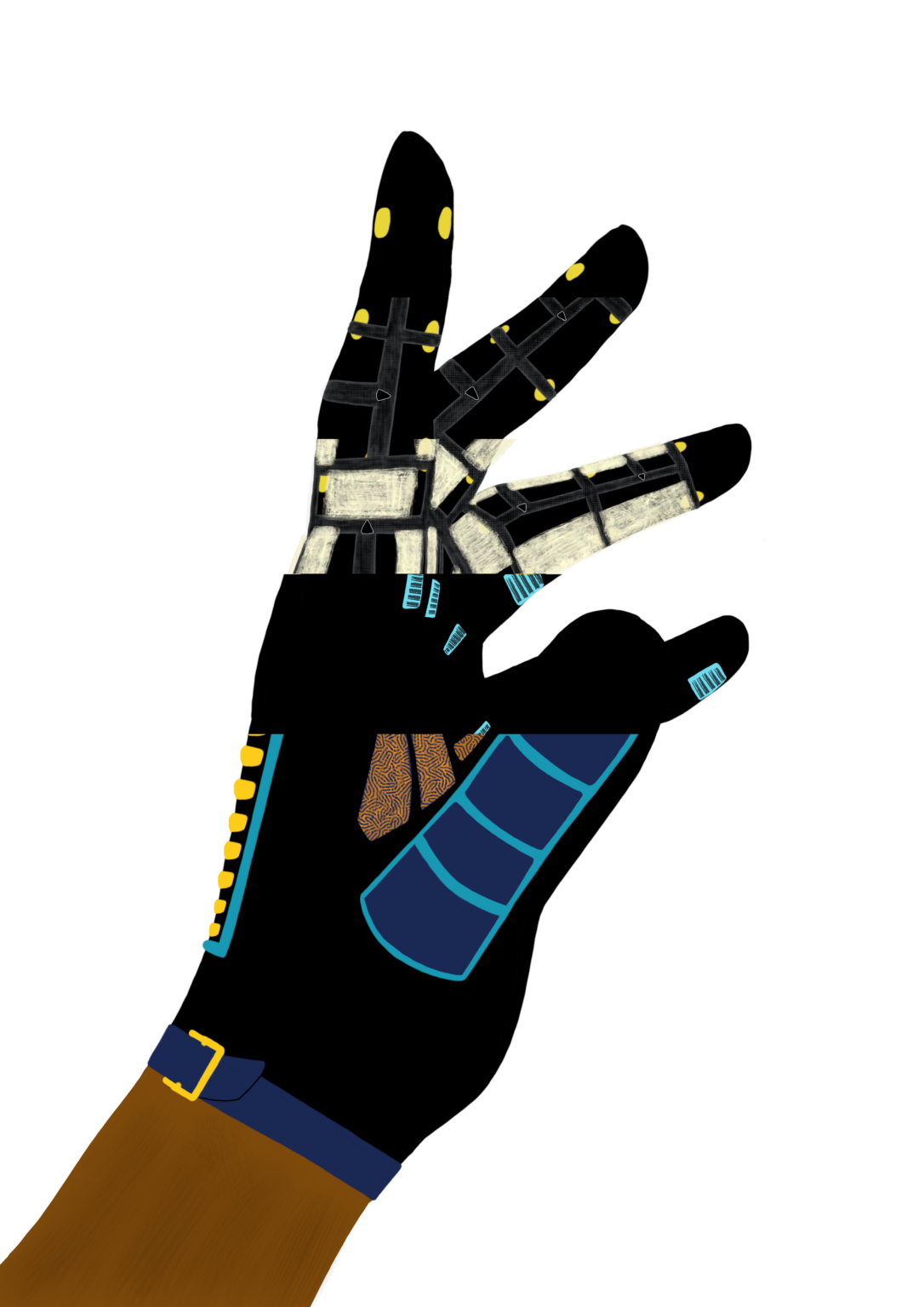 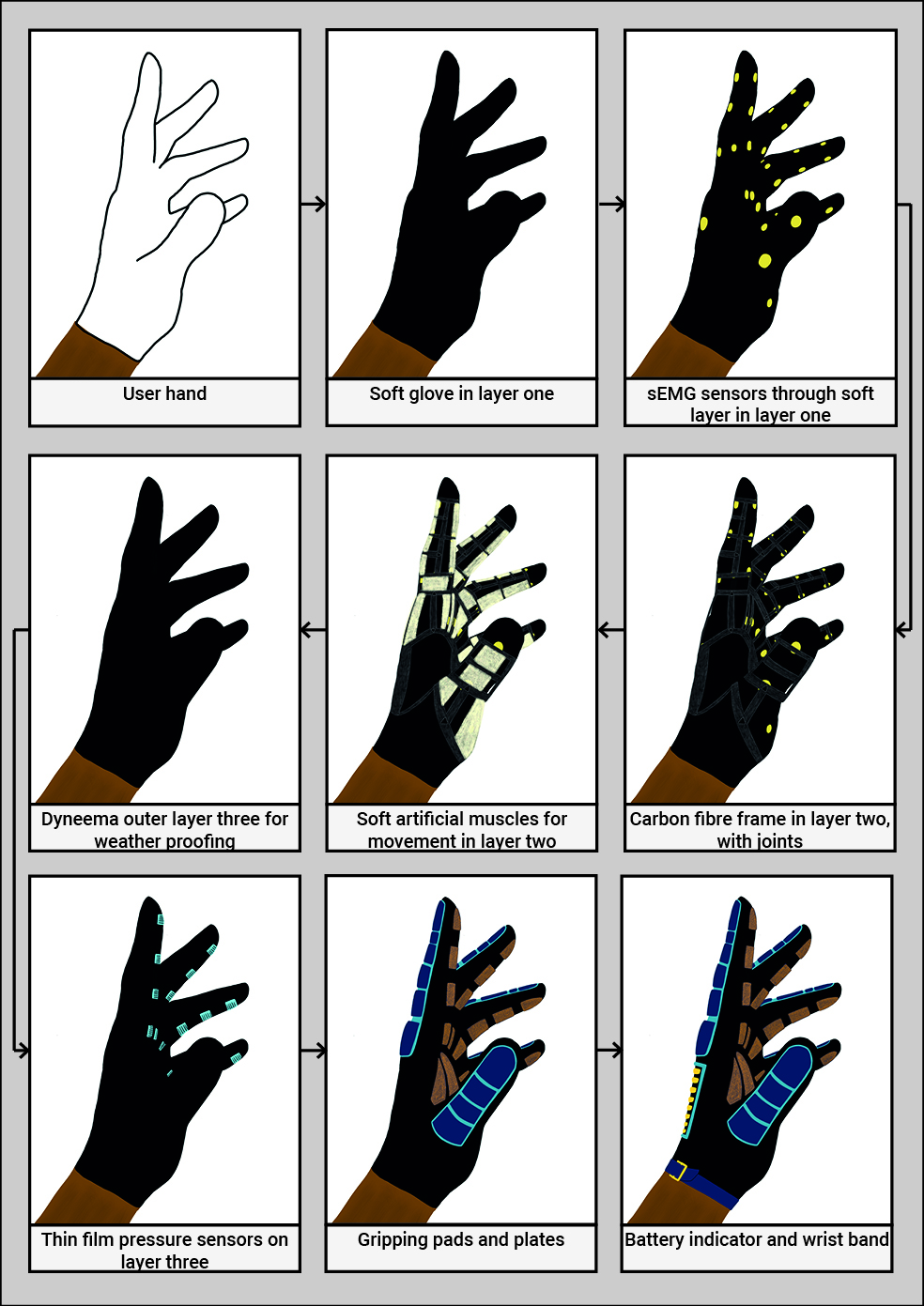 Dorsal View
5 of 6
Previous Next
Close

Palmar View
6 of 6
Previous Next
Close

The project’s intention was to identify a ‘circular design opportunity’ and design an appropriate product-service solution.
This project was undertaken by a team of four. At the end of the school day parents crowded at the school gates to pick up their children. Blocking roads with their vehicles and making noise while chatting with other parents. Moreover, the fumes from the approaching vehicles create a toxic environment for everyone in the surrounding. Meanwhile, children grow tired of waiting for their parents and saunter towards nearby parks and roads in groups. This worsens the traffic situation. However, the children in the parks seem to be enjoying their time. This brought the team and I to consider the opportunity on designing a park that is engaging to students.

The product has three primary sections – Power generation, The Gate, and the Charging station. Each ‘module’ of the park is designed to be self-sustaining and electrically separate from another module

Power is generated through two technologies – solar panels and kinetic pavement. These two methods were found to be the most conveniently available source of renewable energy and the simplest. The park is designed to be energy positive. Any excess energy generated over the consumption needed to operate streetlamps, the gate, and the charging station is expected to be stored in a battery or sent to the main electricity grid.

An RFID gate is installed at the park entrance that tracks the coming and going of individuals. This can be integrated into the school systems so that when a child enters or leaves the park
the parents get notified. This improves the safety of the park. Additionally, parents will know to approach the park when coming to pick up their children. And the child does not have to be picked up as soon as school ends. Leading to lesser traffic congestion and noise around the school and lesser concentration of toxic fumes.

The park is outfitted with a charging station to charge e-bikes and e-scooters. This will encourage children to use sustainable travel means and promote the usage of environment-friendly transport around the neighbourhoods of the park. Each module should be able to charge up to four e-bikes or e-scooters simultaneously. Providing a full-day service. 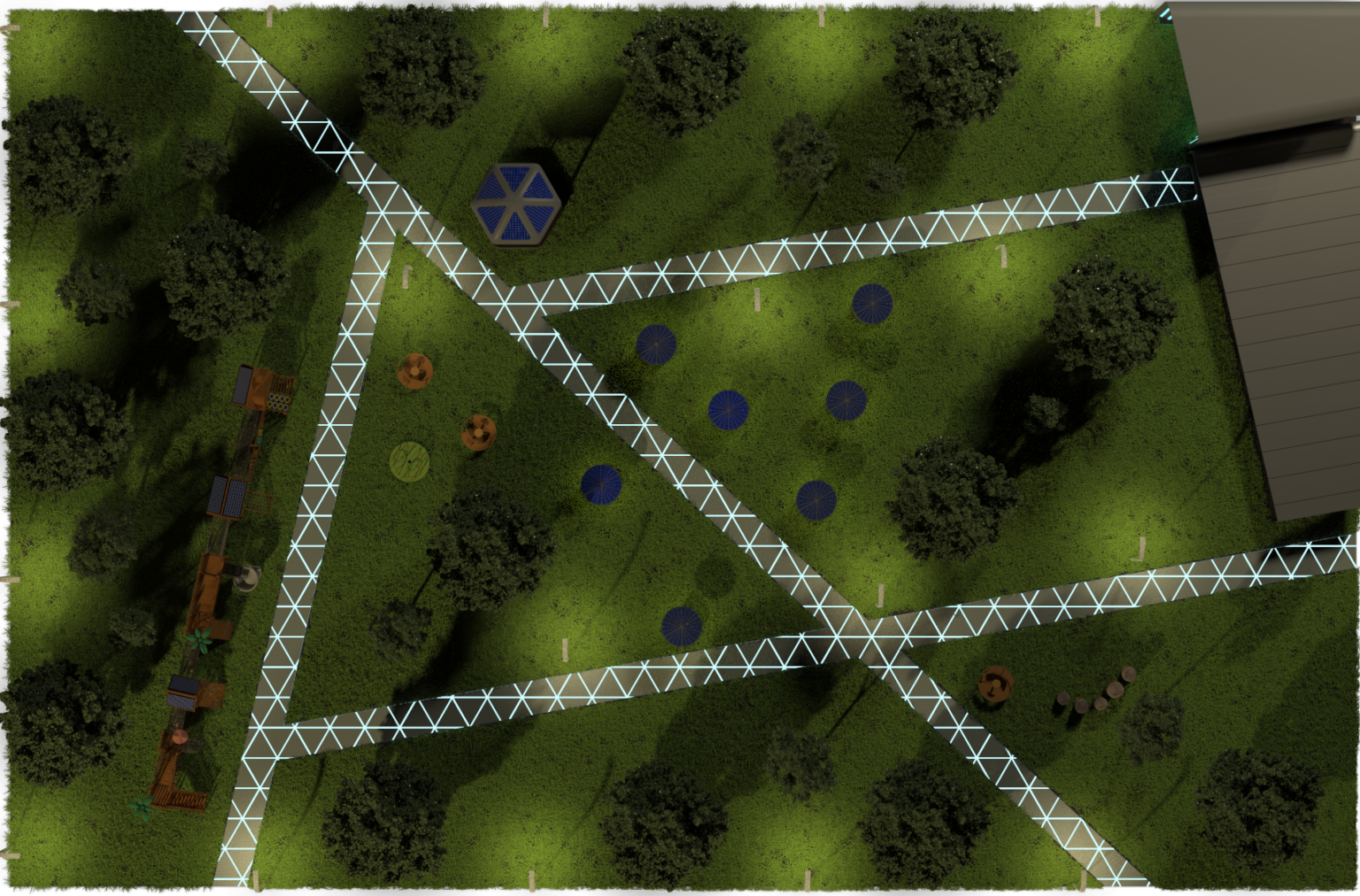 A render of the park designed. Top View.
1 of 4
Previous Next
Close 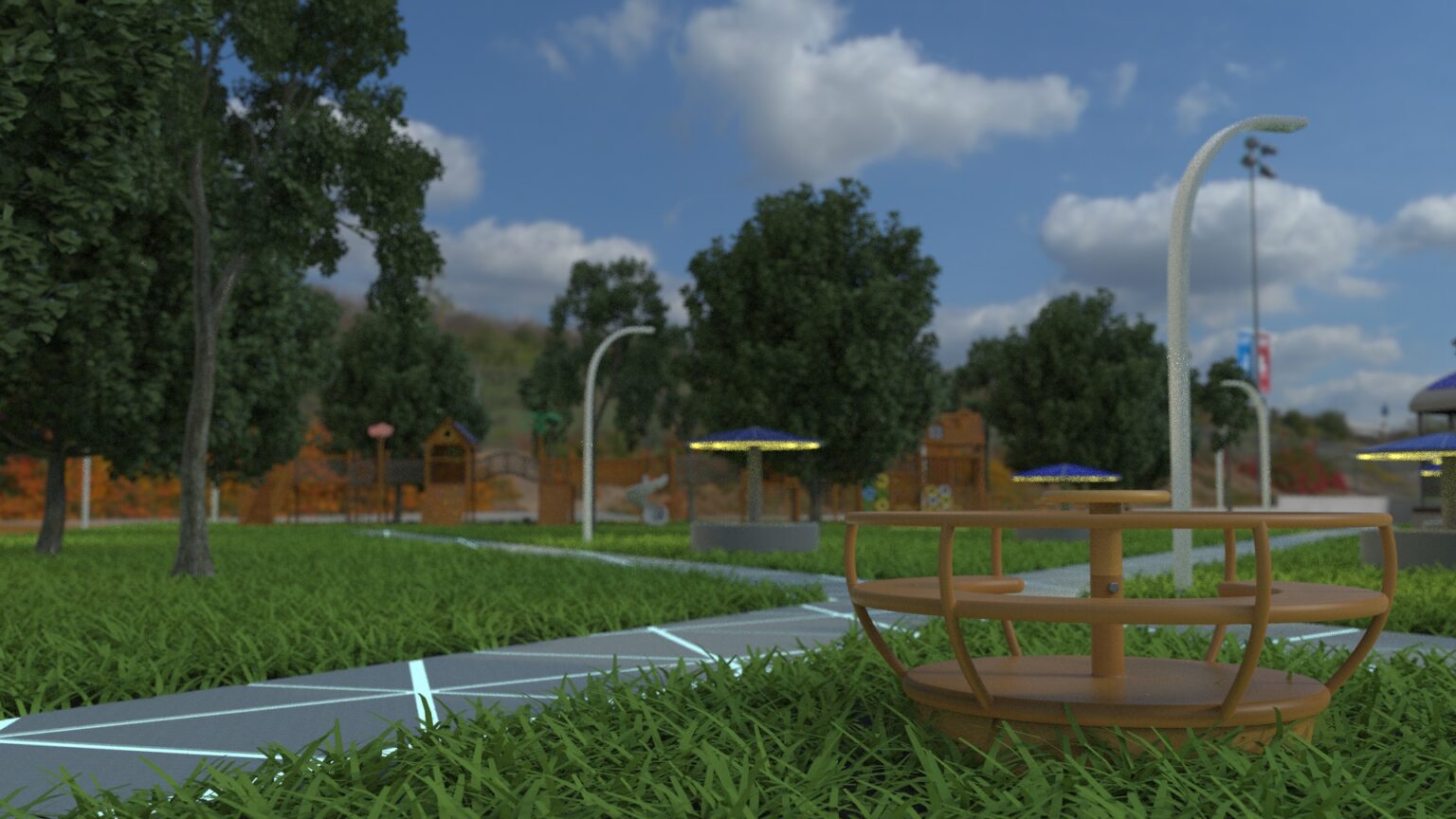 Used to convert energy created while walking to usable electricity.
2 of 4
Previous Next
Close 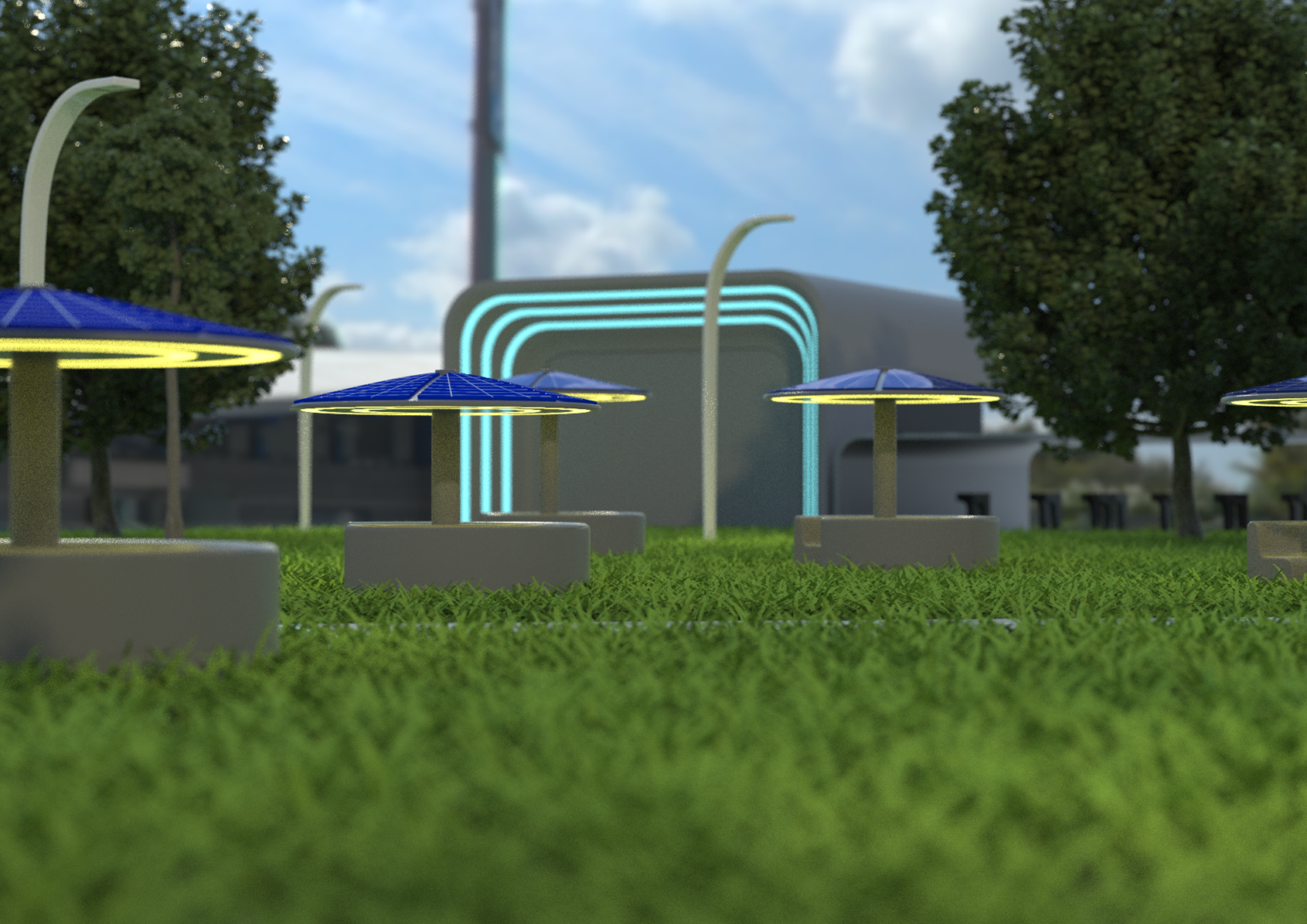 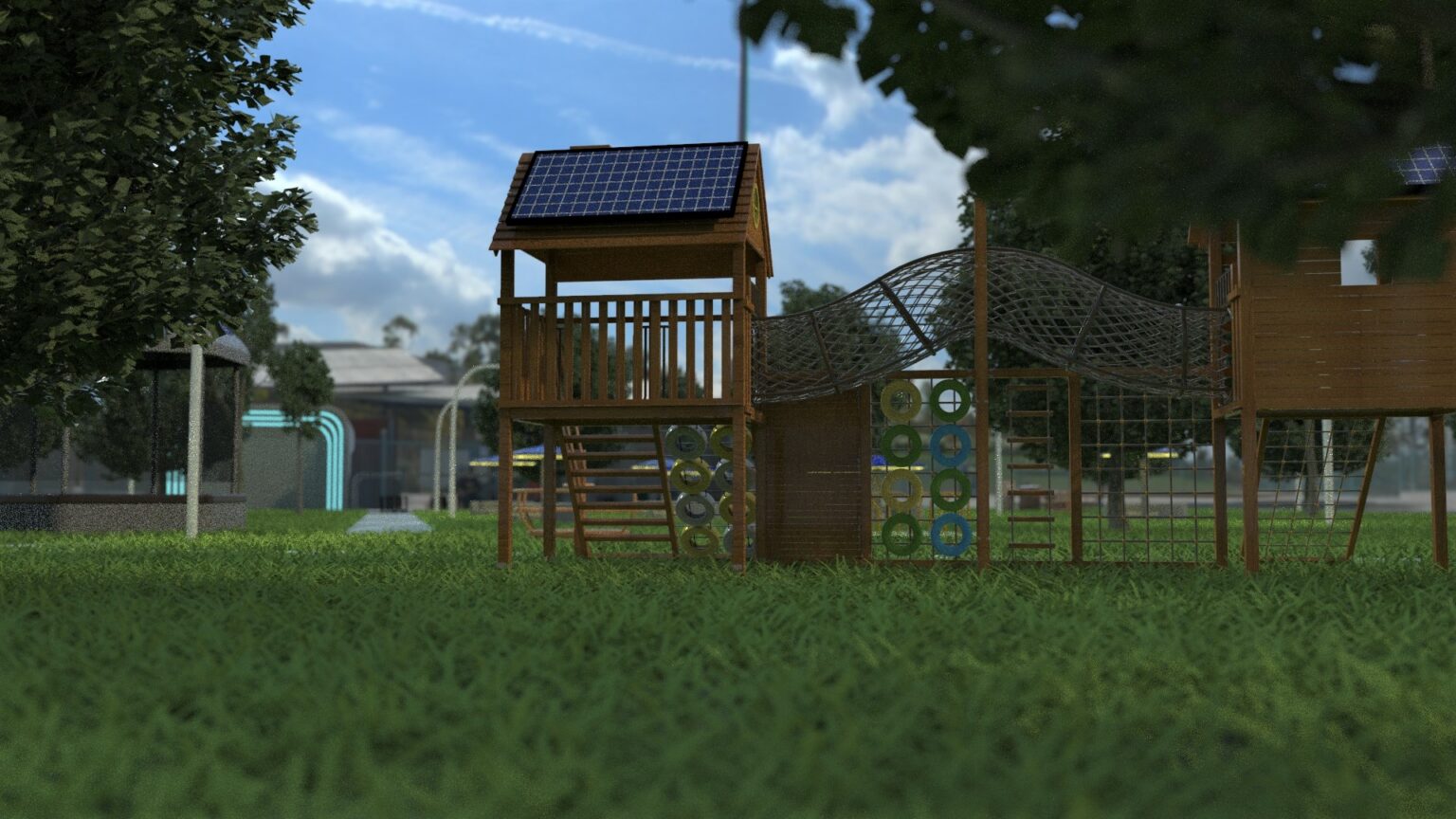