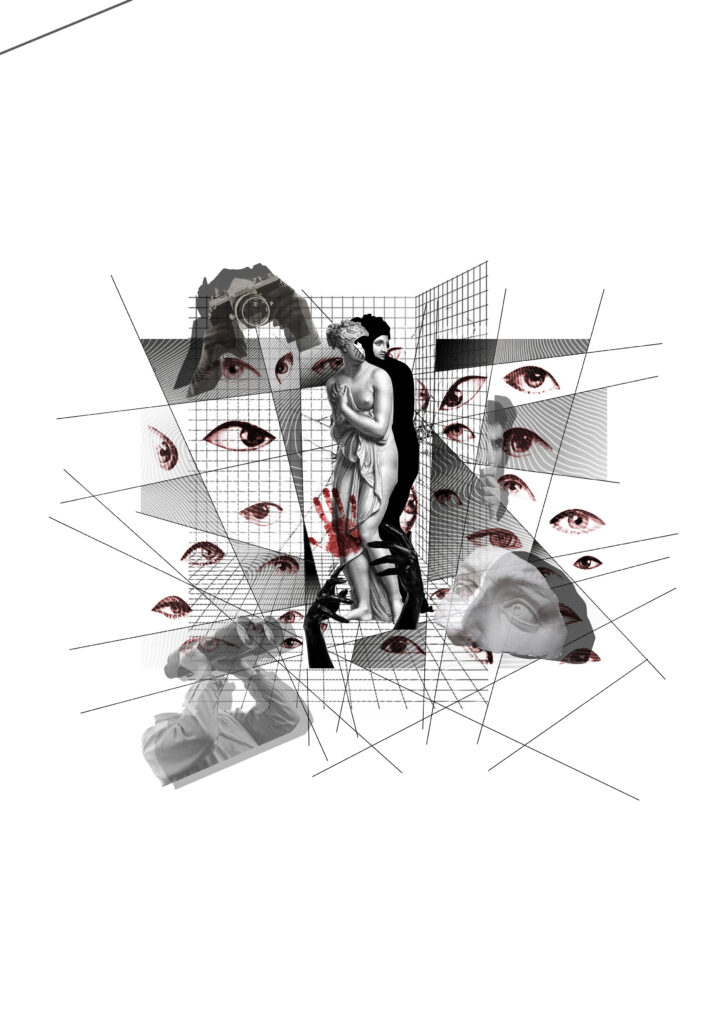 Hi everyone, I am Lu Cheng. I have a Master’s degree in Interior Design. In fact, my undergraduate degree is in Exhibition Design and Planning. In university, in terms of skills, I learnt some simple modeling software such as 3DMAX and SketchUp; in terms of design, I focused on the study of human spatial experience and spatial narrative. After that, I worked in a design company in Shanghai for 3 months, mainly responsible for styling and content planning. I was responsible for the styling and content planning of the showroom. During my work, I also gained some detailed experience of space.

I like the Japanese architect Takuya Nakamura. I think his design work is very textured, both in terms of building materials and spatial design. I think he takes into account not only the feelings of the owners and users, but also the architecture itself.
I chose to study MA Interior Design at GSA because I wanted to study the direction of narrative space design. I want to work in a future art gallery or museum. So I think Narrative Spatial Design will be helpful for me.

I hope that during my studies at GSA I will be able to clarify the direction and details of my future career and improve my professional research skills. Glasgow was Scotland’s first industrial city. It has a long history. It’s not as busy as Shanghai or London, but it has its own cultural traditions. I like cities with history and stories. Since I started working in September I have gone through phase 1 – the ‘Sliced’ fur project, phase 2 – ‘The Host’ and phase 3 in my final year. My Phase 3 project also focused on using space to tell stories and experiences.

I have found studying at GSA to be very fulfilling and enjoyable. The teachers organized the discussion of ideas and projects and everyone was able to present their own ideas and suggestions. This brainstorming made the project design more interesting and logical.

Firstly, I collected photographs of five women living alone on their way home and asked them to describe in detail how they felt about the spaces that frightened them on their way home. Then, we analysed the type of spaces that frightened them. What elements were present? Through the exploration of the model, I found that there are four types of spaces that frighten women living alone: narrow and long spaces, wide and low and sheltered spaces, staircases and dark spaces. So narrow, long spaces, wide, low and sheltered spaces form the basis of my exhibition.

For the spatial structure, I extracted the nodes from the paths of the five women who live alone and folded them with origami to create a route to their homes. And overlapping these 5 spatial structures, the acute angle element was extracted. And sharp-angled spaces can also be uncomfortable. So I used sharp angles in my spatial structure.

This exhibition uses the element of mirrors to penetrate the whole space. Mirrors have the function of extending space and blurring the boundaries of space, and I wanted to use this element to create a disorienting and tense atmosphere for the exhibition.

And for an exhibition installation that allows people to experience the dangers of living alone as a woman. Firstly, I extracted four behaviours from the responses of those five interviewees that frightened them: Be followed, Be peeped and monitored, A stranger knocks at the door for no reason and Verbal and physical harassment. Because it is difficult to express behaviours in space. So I wanted to show it in the form of art. I designed four experiences from four behaviours that frighten women living alone, so the gallery was divided into four spaces. One behaviour corresponds to the experience of a spatial installation.

The first gallery is for people to experience being surrounded by others suffering from verbal harassment. The material of the entire hexagonal prism is disturbingly mirrored. When the viewer enters the installation and stands in the centre of the hexagonal prism, the viewer’s figure is reflected, elongated, shortened or distorted. Coupled with the unpleasant verbal harassment playing through the headphones, one develops a sense of being surrounded by people speaking evil words.

The second gallery allows people to experience the sensation of being trailed. Based on the mirrored space, I have hung many lenses of different sizes and angles. As people walk through them, they can only see parts of other people’s bodies or their own bodies. Wherever the viewer goes, there is a mirror reflecting their own shadow. Because of the size of the mirror, they can only see part of their own shadow walking with them, as if they are being followed by someone else, but you cannot see the full picture of the stalker, which is unsettling.

The third gallery allows one to experience what it is like to peer and be peered at. The space is a long corridor that gets narrower and narrower as you go, and the installation is made up of cameras and corresponding peepholes. The device has two parts, the peephole is on the left and the camera is on the right. As the viewer looks into the peephole they see their own backside. This space gets progressively narrower the closer the camera gets to the people. This is like the feeling of being pried into the privacy of another person, making the viewer feel nervous and uncomfortable.

The fourth gallery focuses on the dangers of doors and windows in the living spaces of women living alone. I have therefore created a transitional and deconstructive structure from window to door. The exhibition space consists of seven mirrors with different openings. These seven mirrors are fan-shaped and the openings gradually become larger, moving from ‘windows’ to ‘doors’. When the viewer enters the space, they first see the ‘window’ and then the opening gradually becomes a ‘door’ as one moves around. The person’s perspective also changes from standing outside the window to standing in the door.

This last space is the exit of the gallery and is positioned at the centre of the exhibition space, like an observer or monitor, so I wanted to reflect this with the material of the two way mirror, through which people can look back at all the galleries they have experienced along the way. This space is invisible to the viewer in the other spaces, and it is also like a twist at the end of the film, where someone is standing in this space watching their every move while the viewer is experiencing it in the original gallery. It also serves as a reminder of the dangers faced by women living alone and the ubiquity of voyeurism in their lives. 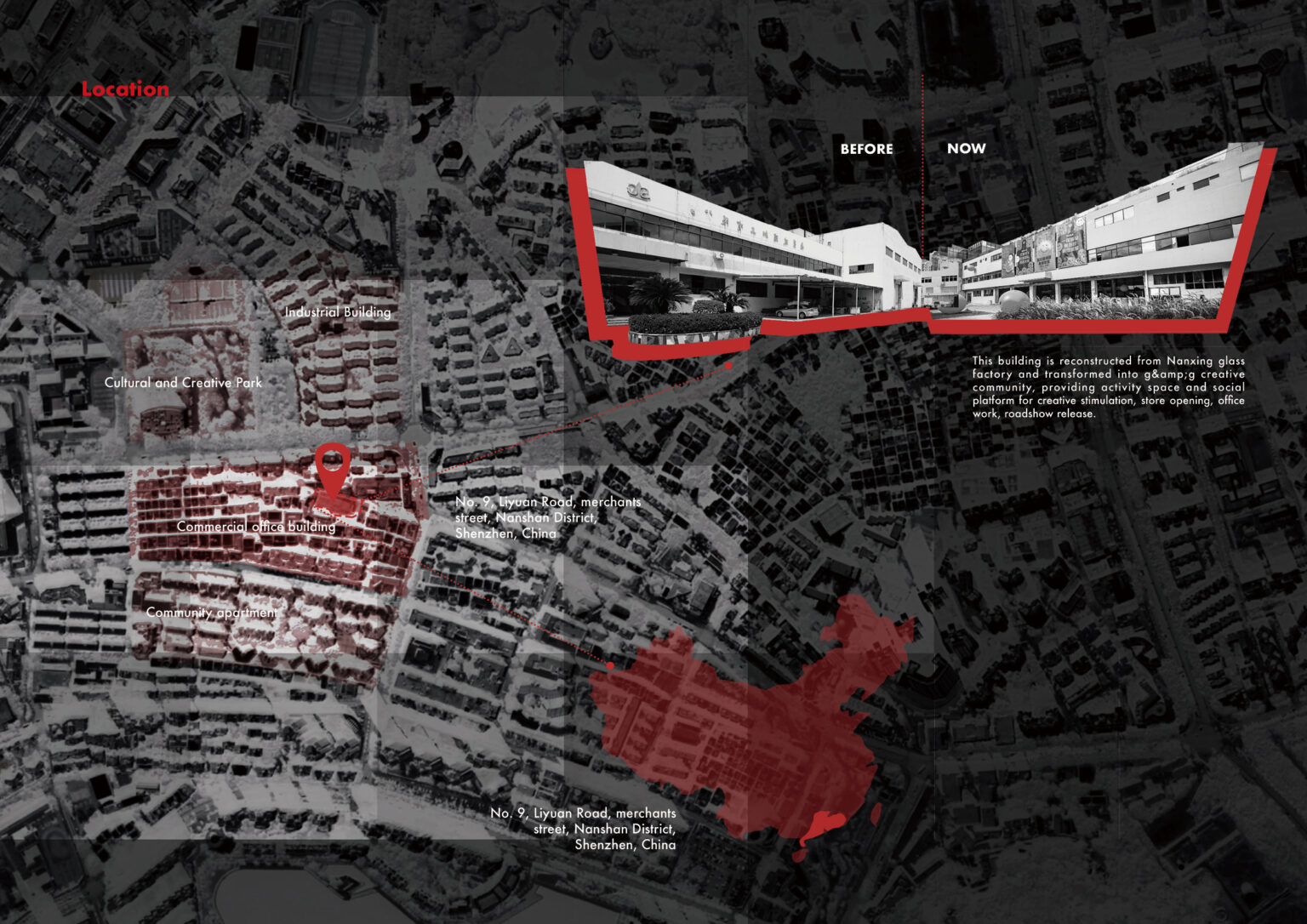 Because this creative park was renovated two years ago, the exhibition space of this building has hosted many exhibitions about female artists. I chose a creative park transformed from old glass factories in Shenzhen, which has the largest number of people living alone in China. There are many office buildings in Shenzhen business district near the site, which are located near many people living alone.
1 of 15
Previous Next
Close 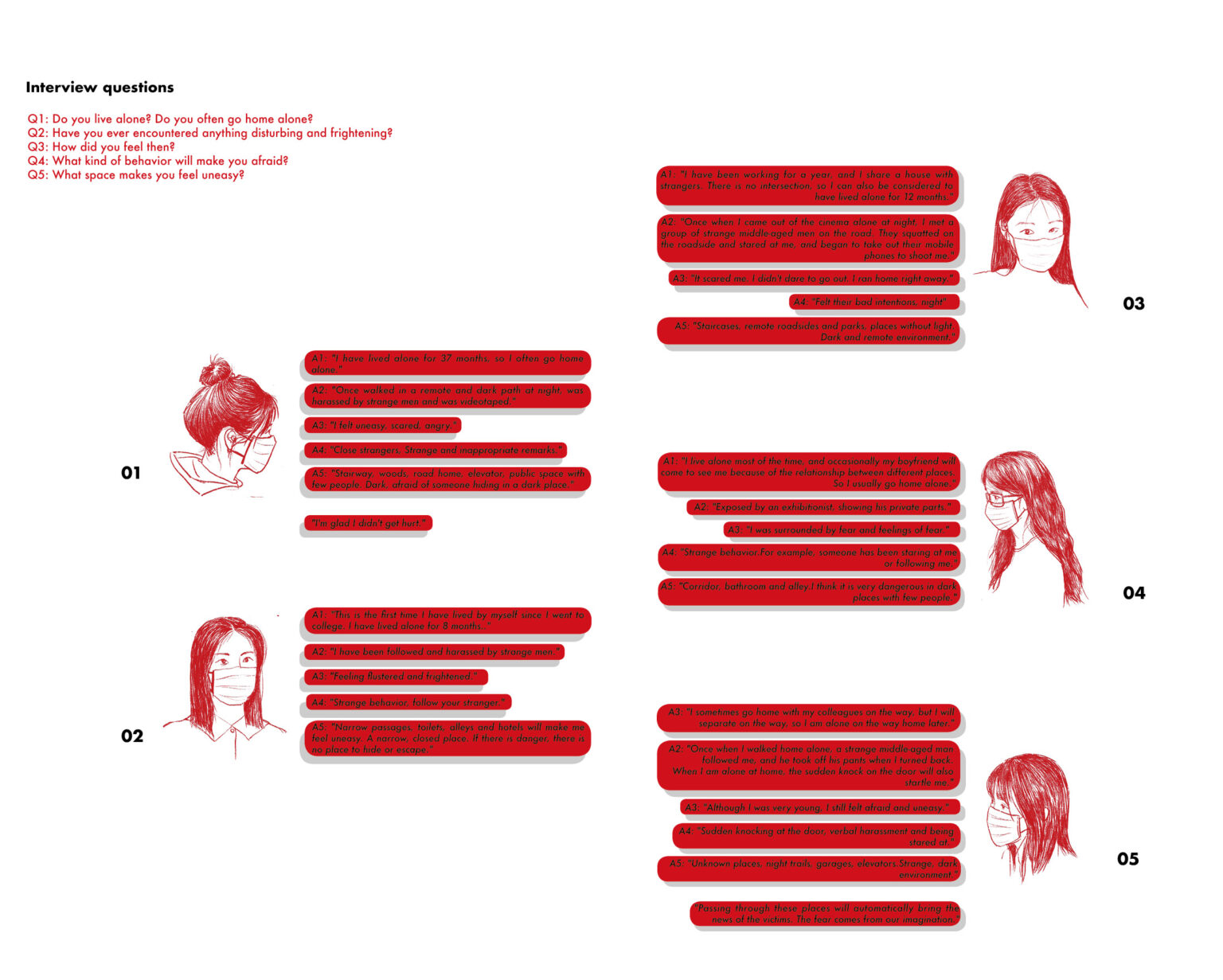 I interviewed five female who had experienced insecurity in solitude. I set up five questions to seek answers. They were asked to photograph places where they felt dangerous and uneasy, and describe the reasons.
2 of 15
Previous Next
Close 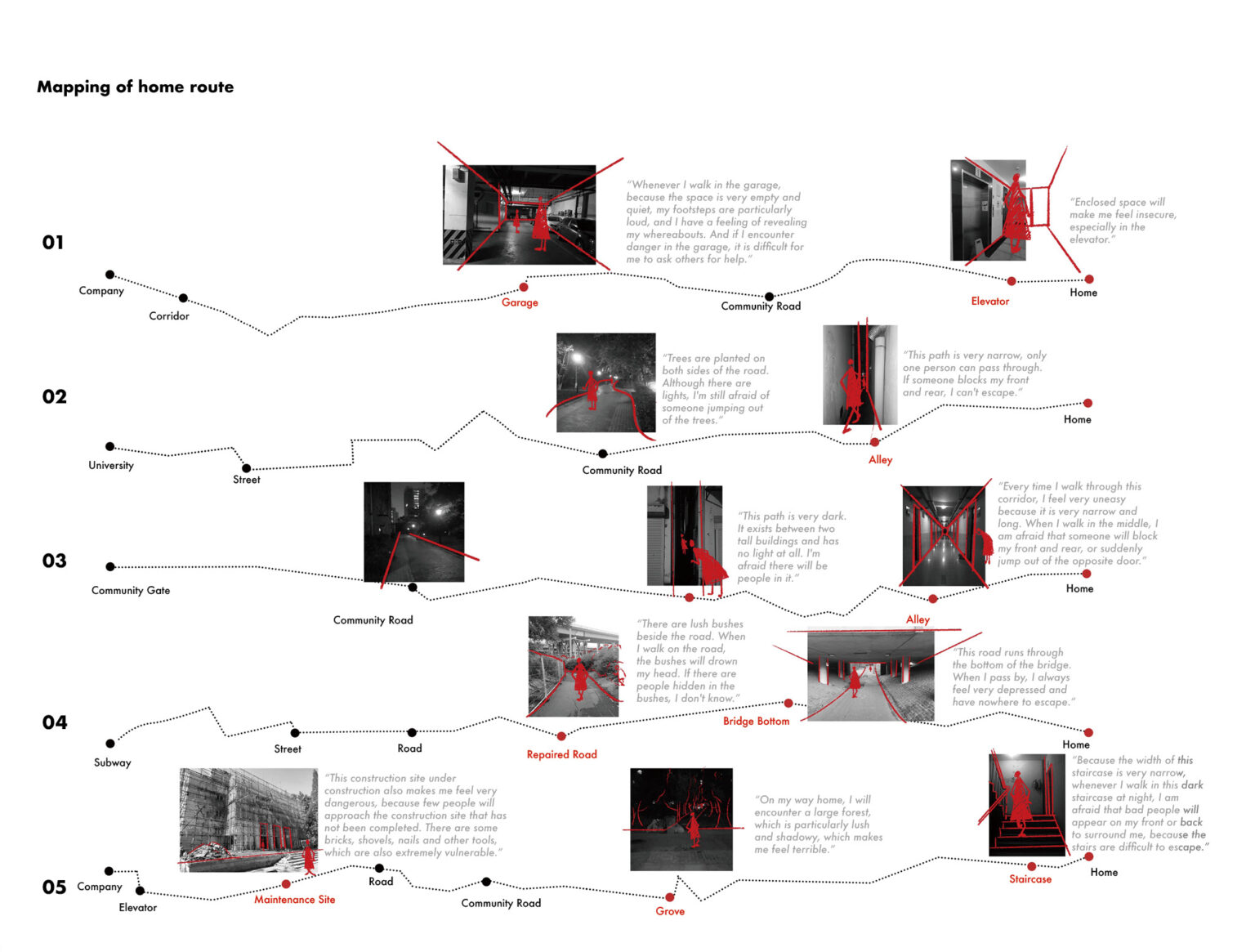 I want to choose this part of the journey for analysis because I encounter danger on the way home and spend the longest time alone. I collected the route home and photos from five women who lived alone. I want to analyze their route. What space will they go through on their way home? What kind of space will make them feel uneasy and afraid?
3 of 15
Previous Next
Close 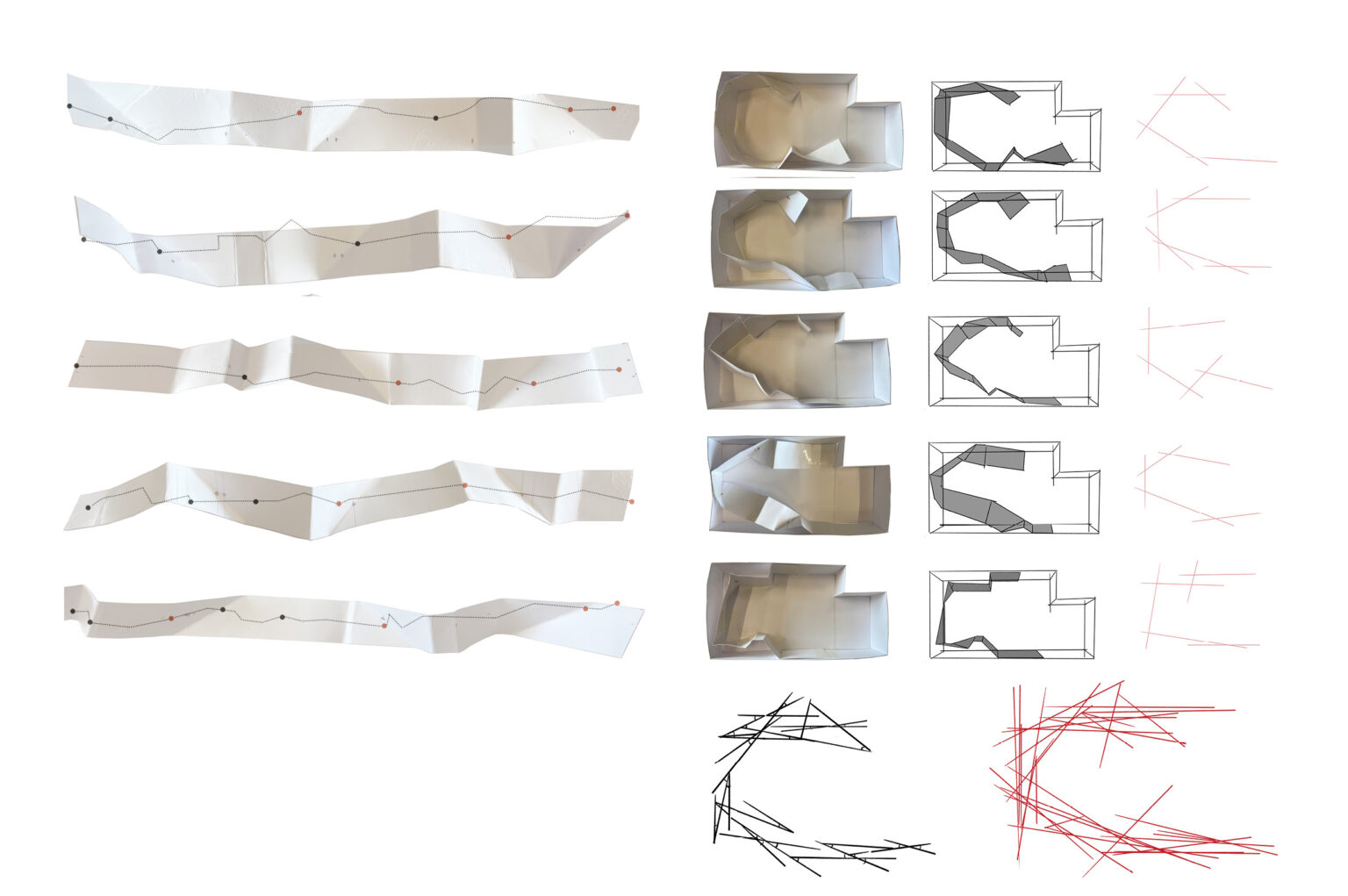 I folded the five girls' home routes with a piece of paper, put them inside the space, and observed the spatial structure formed by them. By simplifying and overlapping such a spatial structure, I find that many included angles will be formed, which are basically acute angles. So I want to use acute elements throughout the exhibition space.
4 of 15
Previous Next
Close 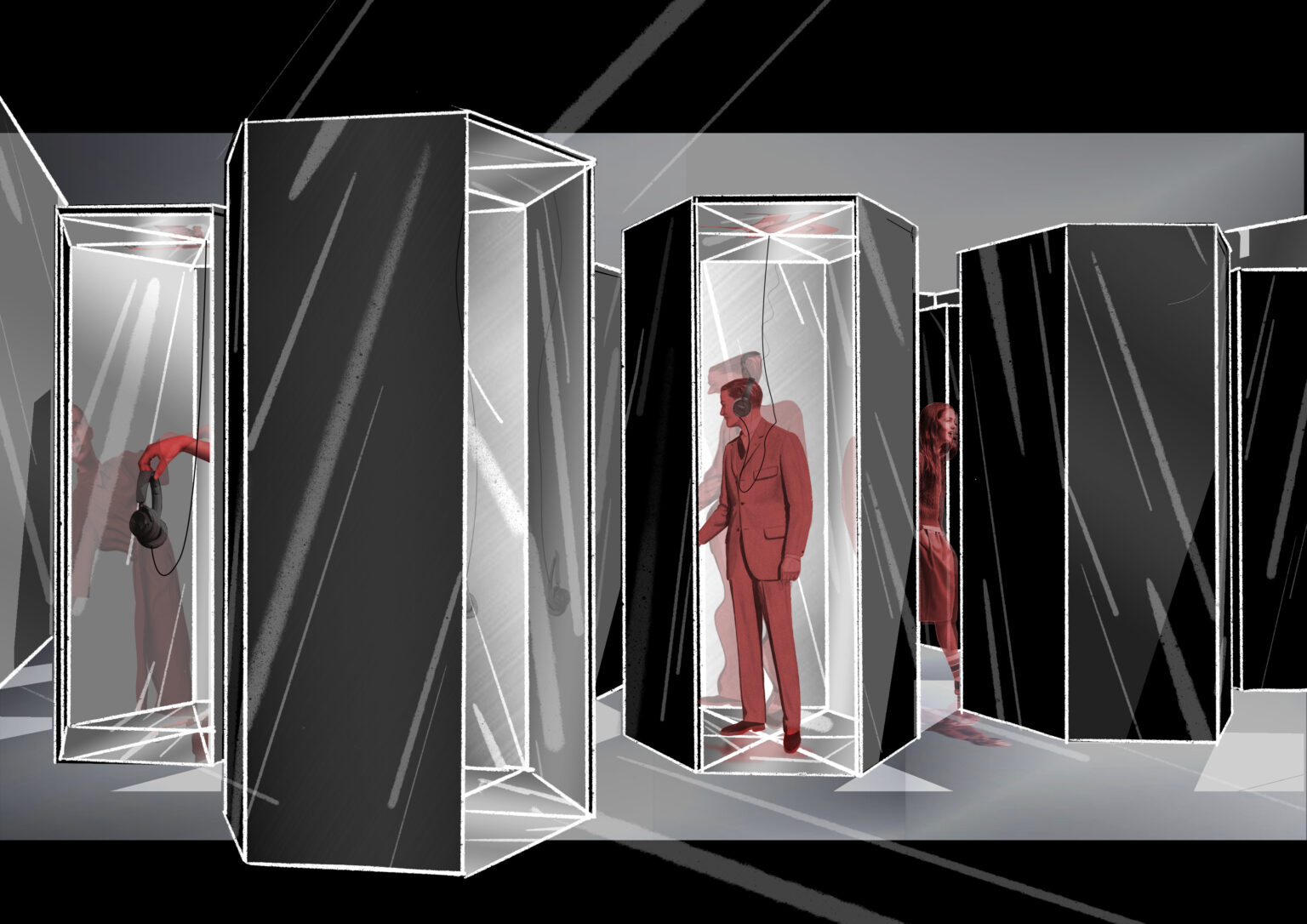 This exhibition space allows visitors to experience the act of being verbally harassed by bad people in a park or other outdoor location. The entire gallery is a mirrored space that produces reflections, with a number of hexagonal devices in the space. As the viewer enters the space of hexagonal prisms, the viewer's figure is reflected and elongated, shortened or distorted. Coupled with the unpleasant language played over headphones, people develop a sense of being surrounded by people spouting evil words.
5 of 15
Previous Next
Close 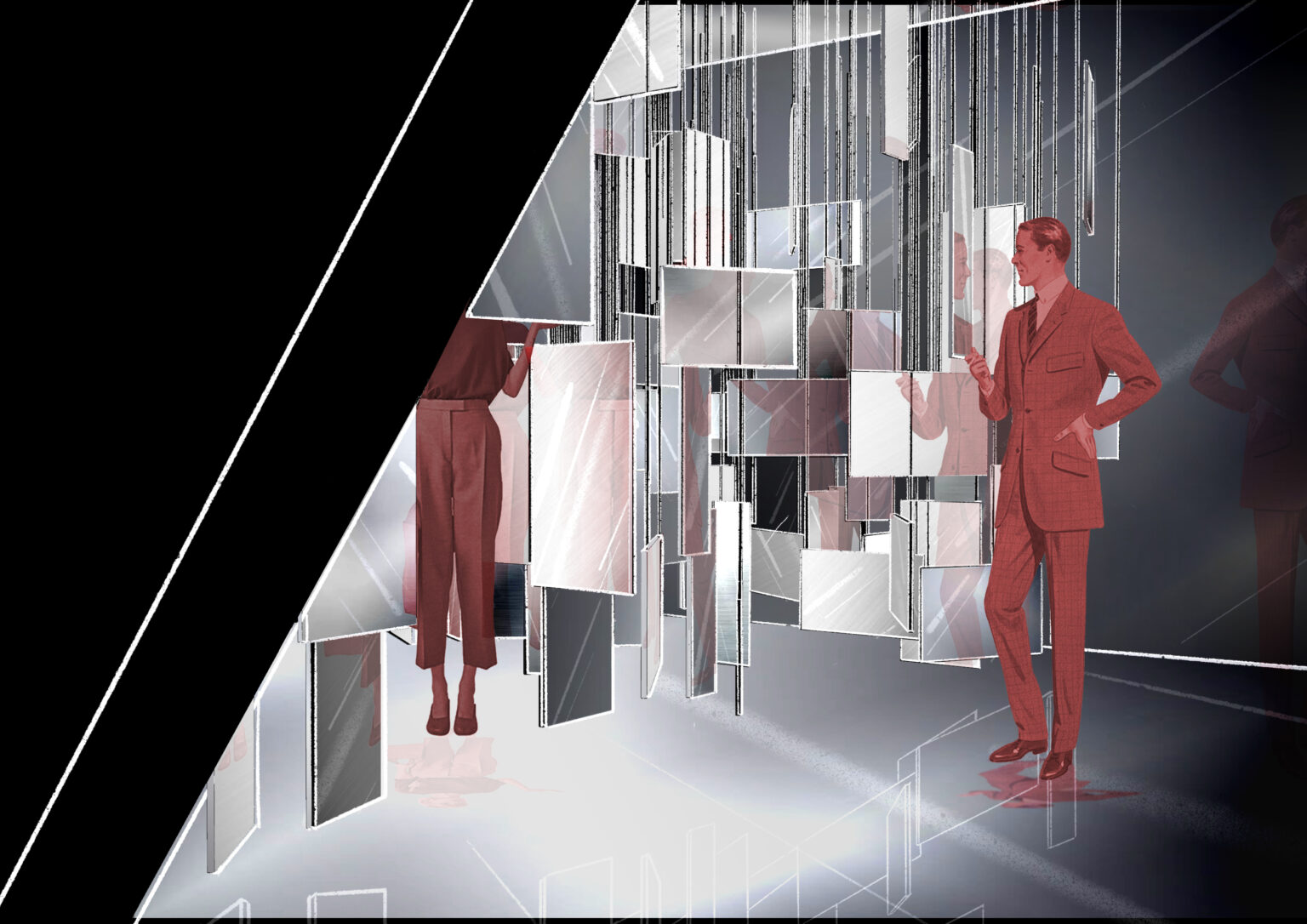 This space is made up of fragments of mirrors of different sizes and angles. When one steps into it, one can form a relationship of obscuration and reflection with the environment - the size of the mirror fragments do not reflect or show the whole body, but only parts of it, such as a pair of walking feet, or a misplaced figure in the mirror. The partial figures in the surrounding mirrors can give you the impression of being followed, but when you look closely you will find that you cannot see the whole figure and cannot tell for a moment whether it is your own or someone else's.
6 of 15
Previous Next
Close 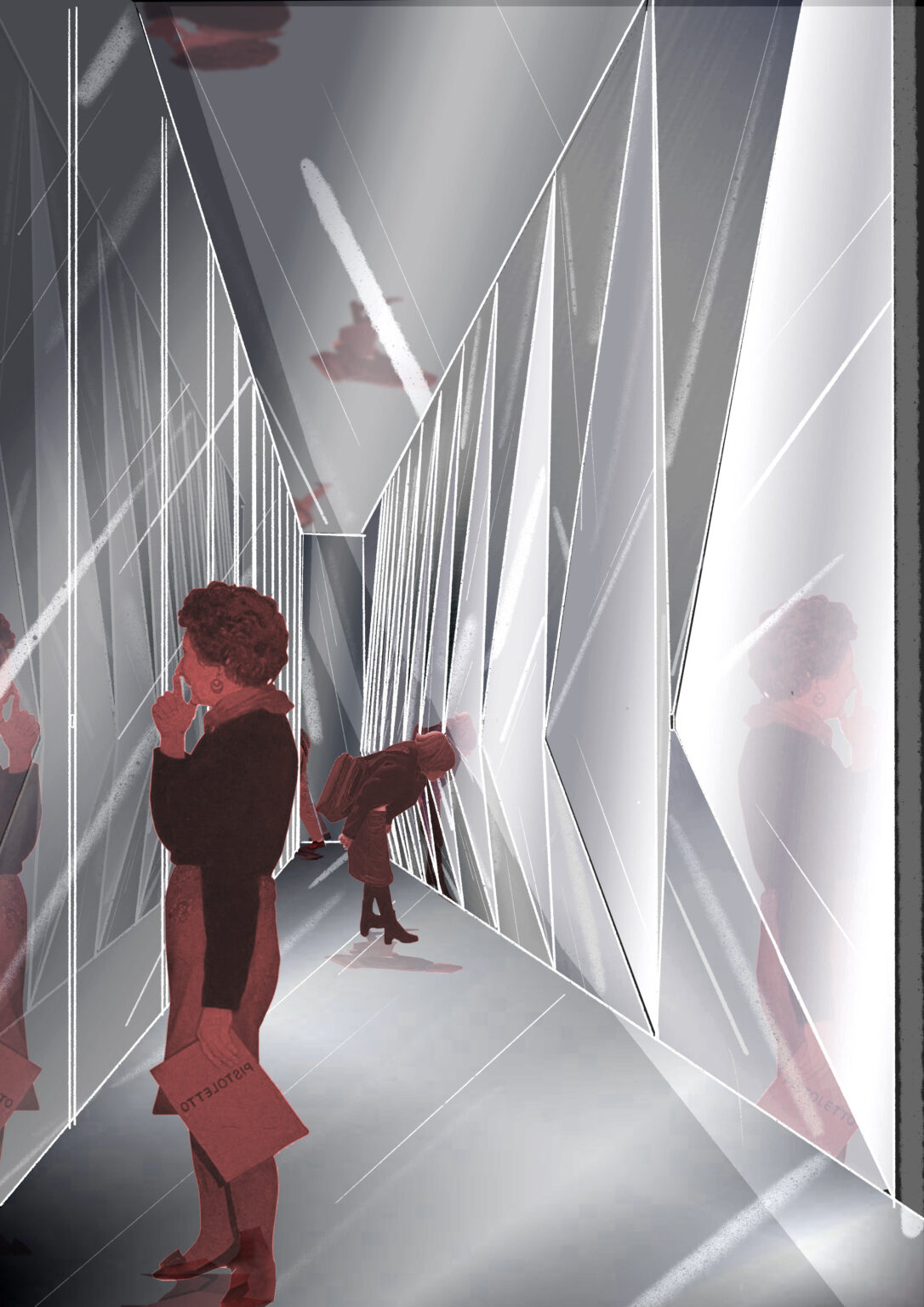 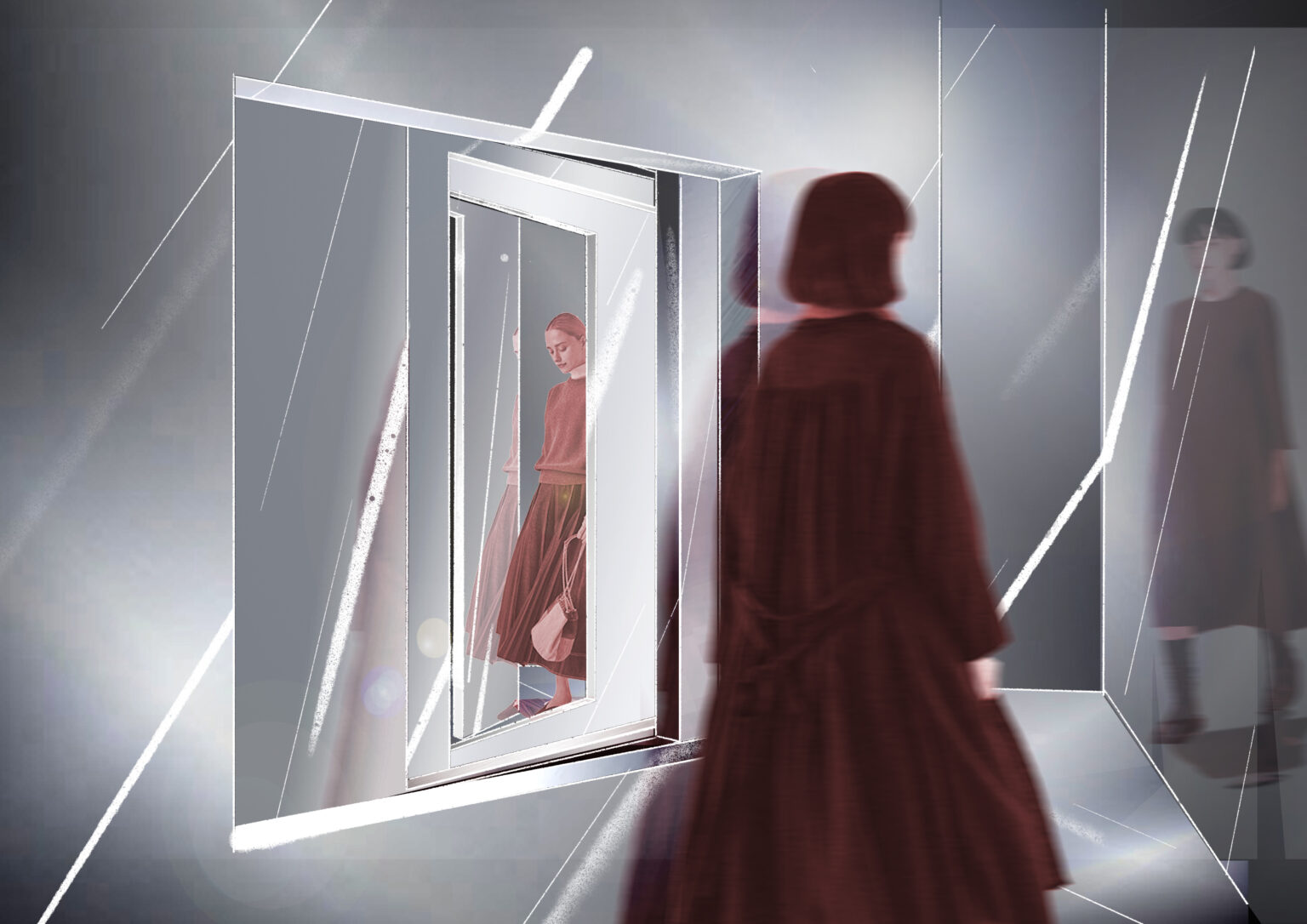 I have created a structure of transition and deconstruction from windows to doors. When the viewer enters the space, he or she first sees a 'window', which then gradually becomes a 'door' as the viewer moves around. When the viewer is about to leave the space, the viewer will see a smaller and smaller 'window' from the perspective of the 'door'. The viewer's perspective shifts from standing outside the 'window' to standing inside the 'door'. The viewer experiences a shift from the observer to the observed.
8 of 15
Previous Next
Close 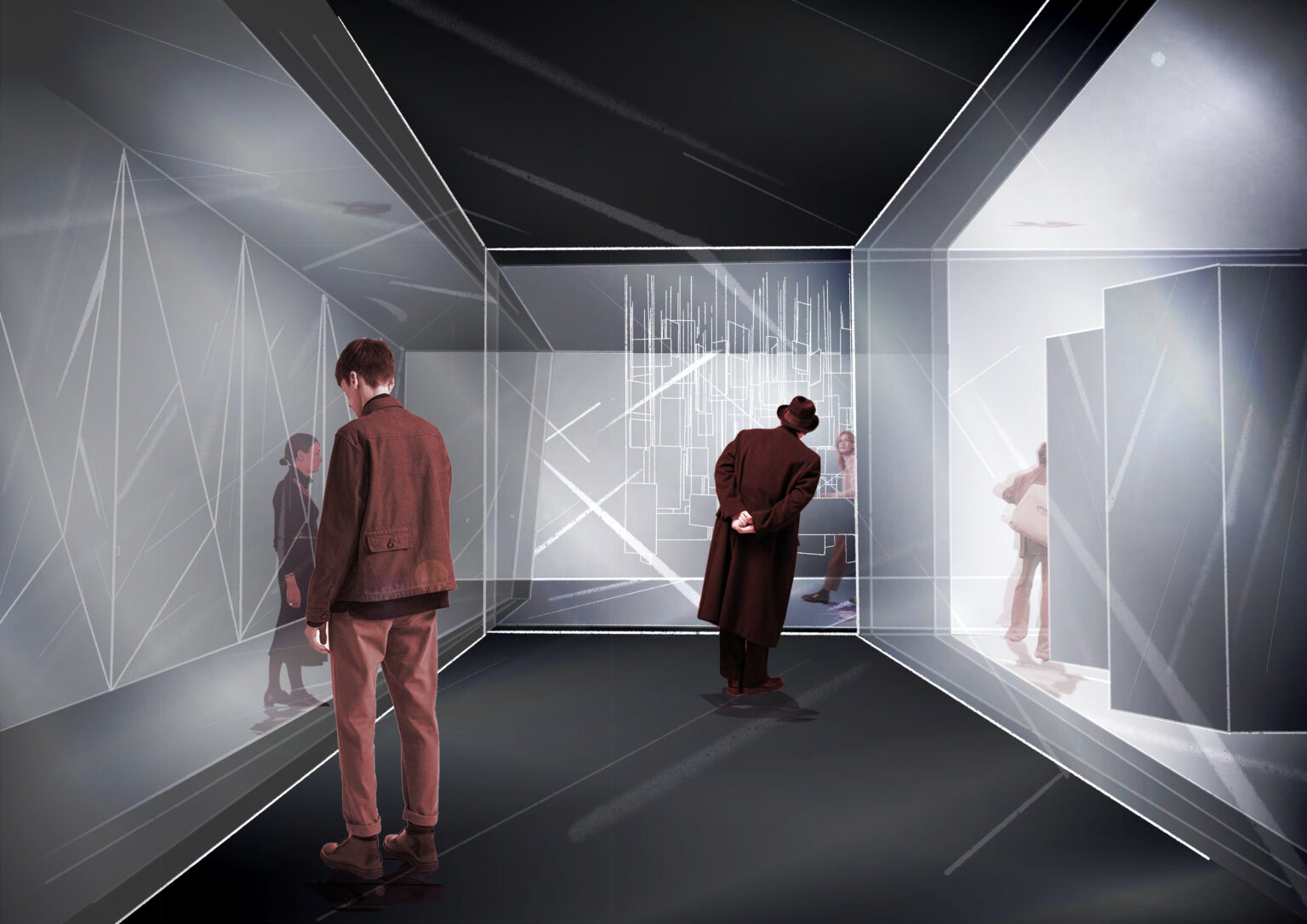 Thanks to Two way mirror material, it is only when one exits this exhibition and enters the exhibition exit that one suddenly realises that one's every move in the exhibition hall has been observed by others before, making the viewer reflect on the fact that women living alone in real life, like oneself just in the exhibition hall, are subject to many dangers without their knowledge. It makes the viewer think carefully.
9 of 15
Previous Next
Close 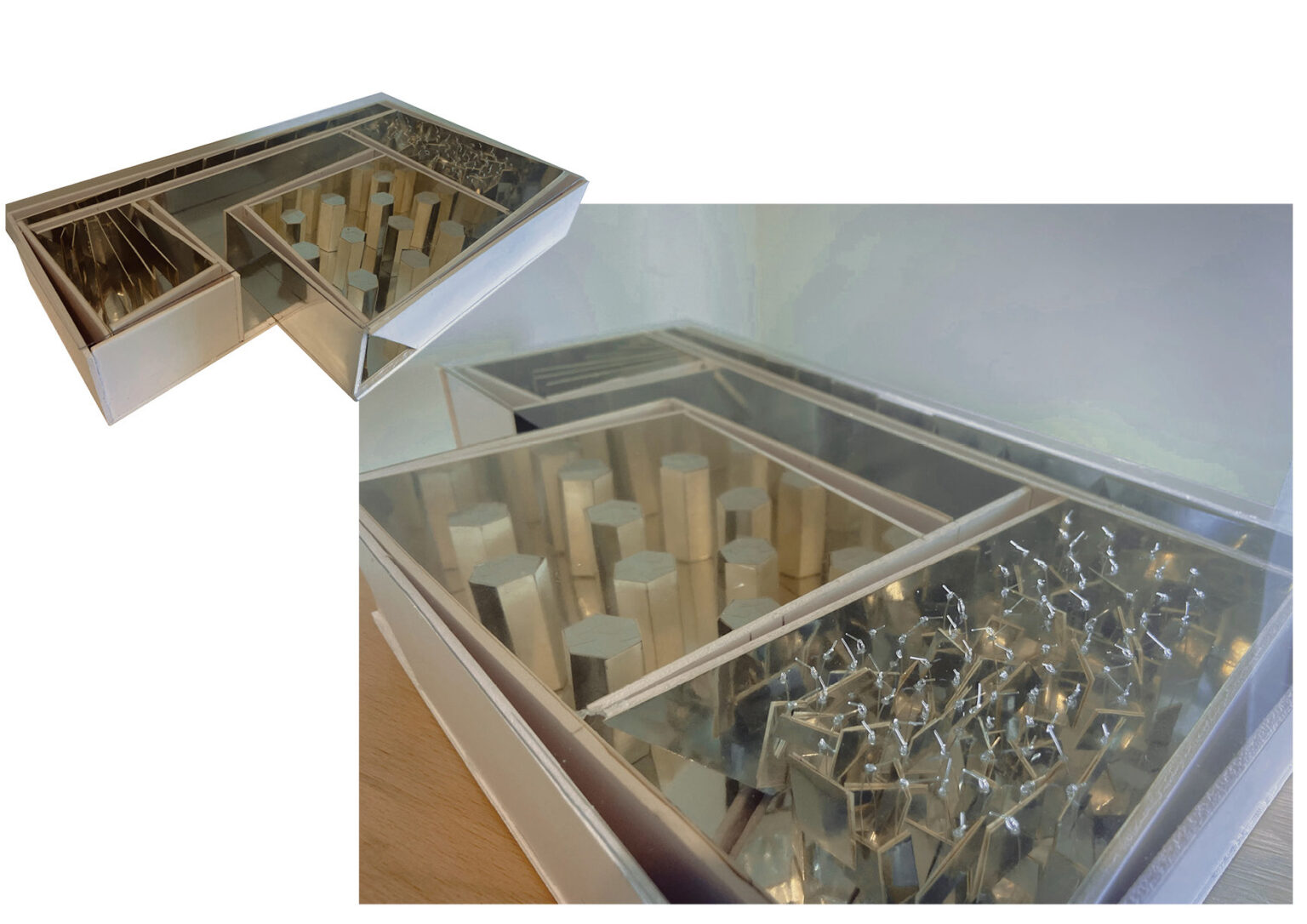 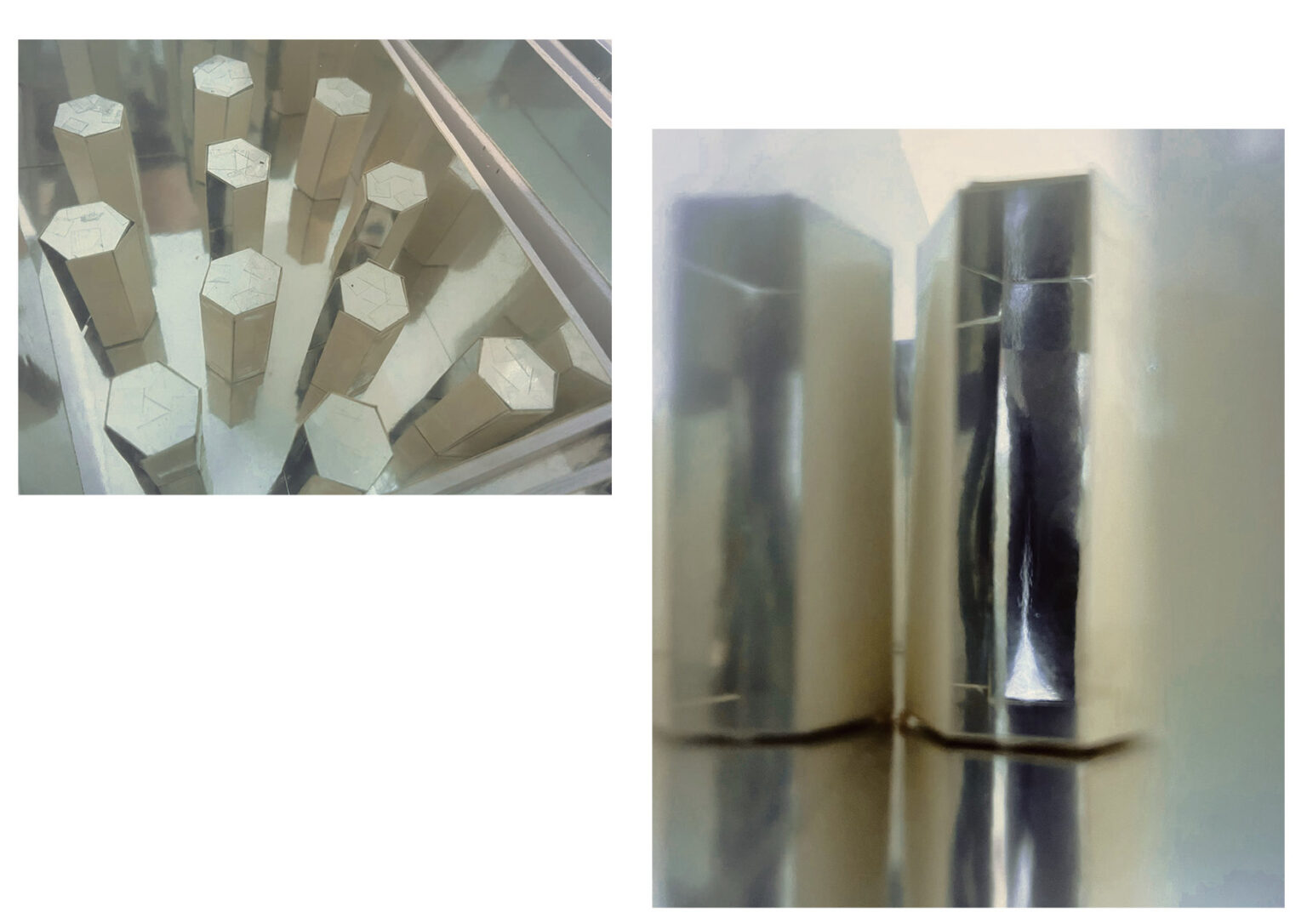 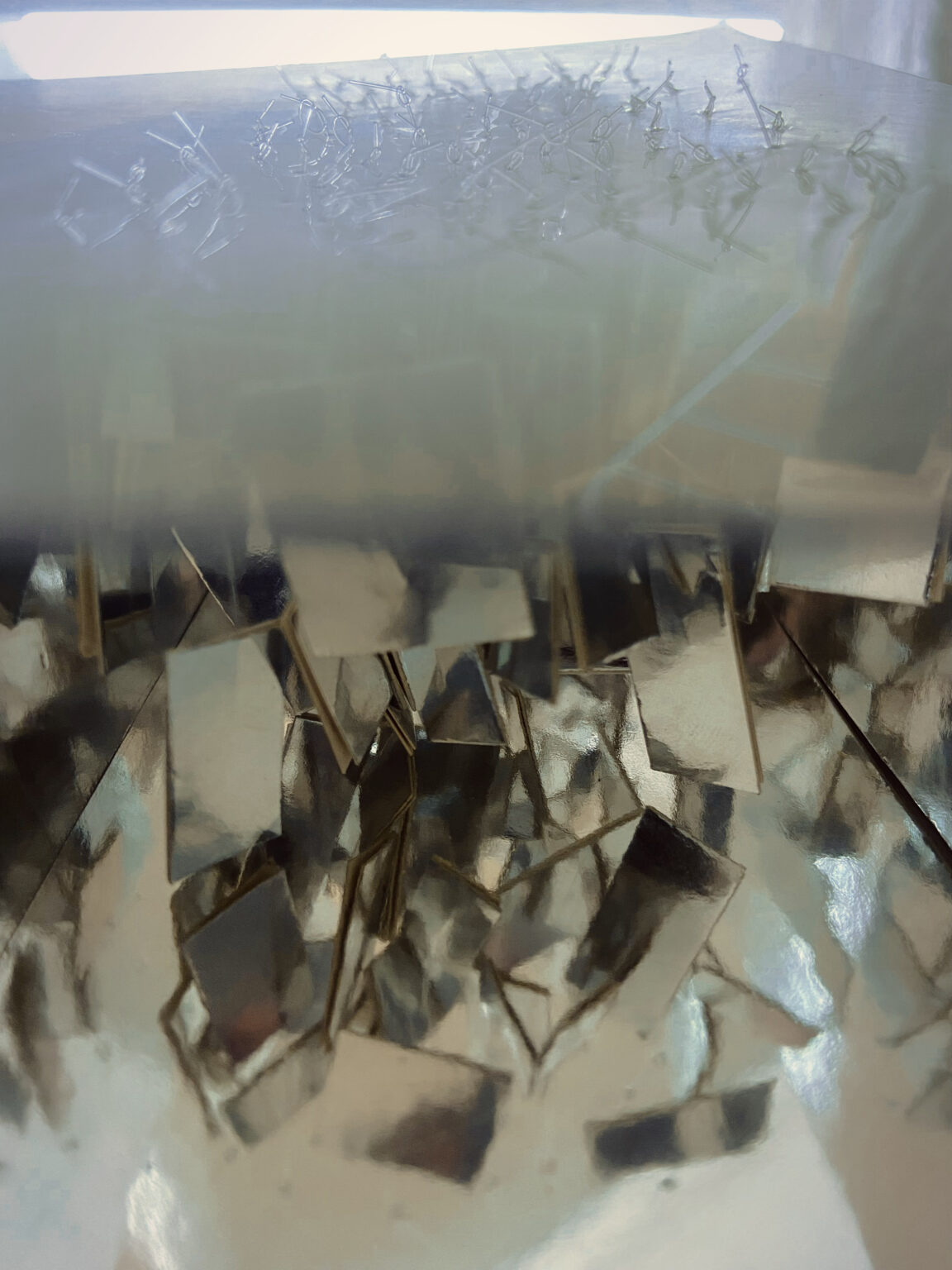 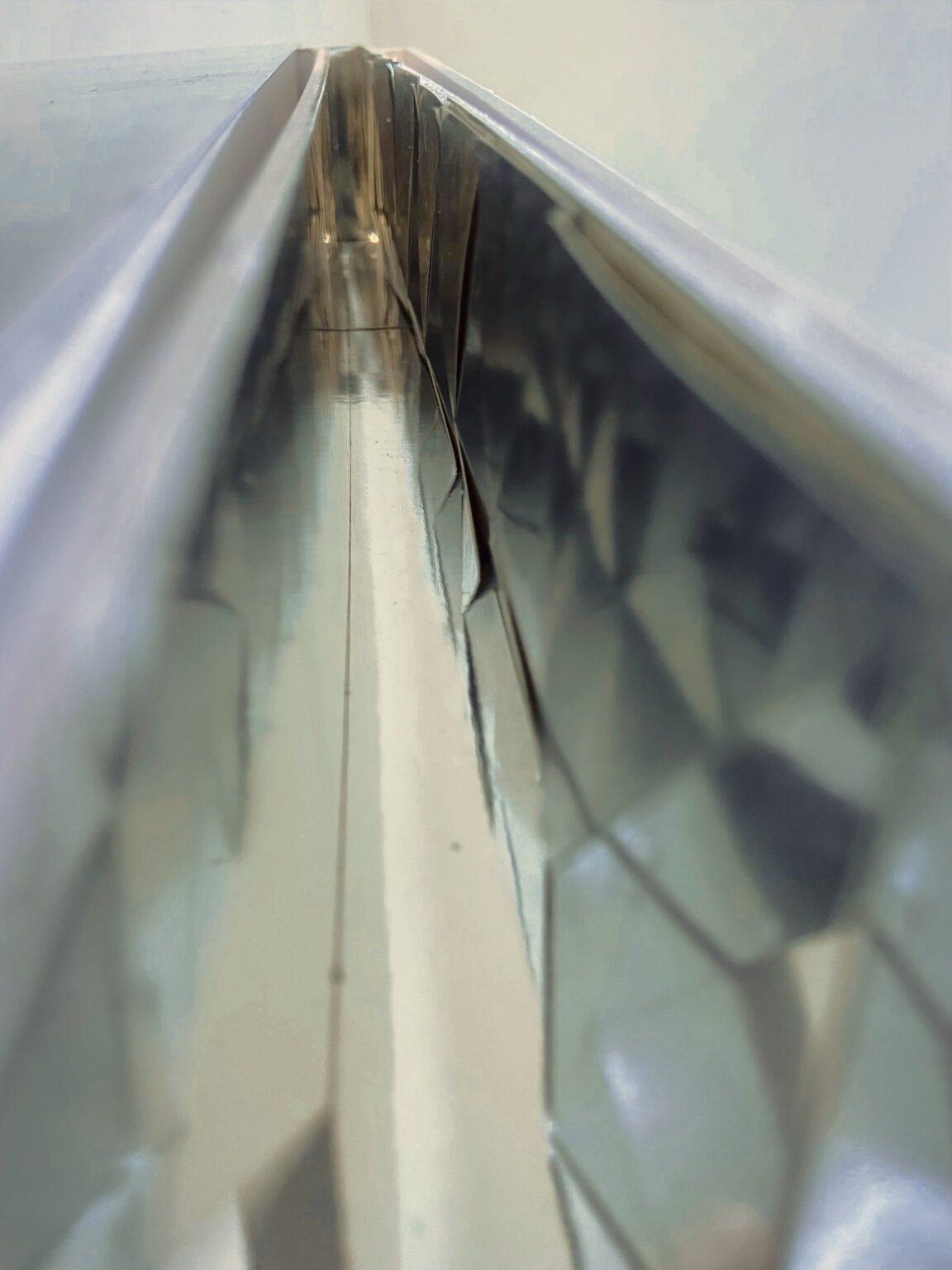 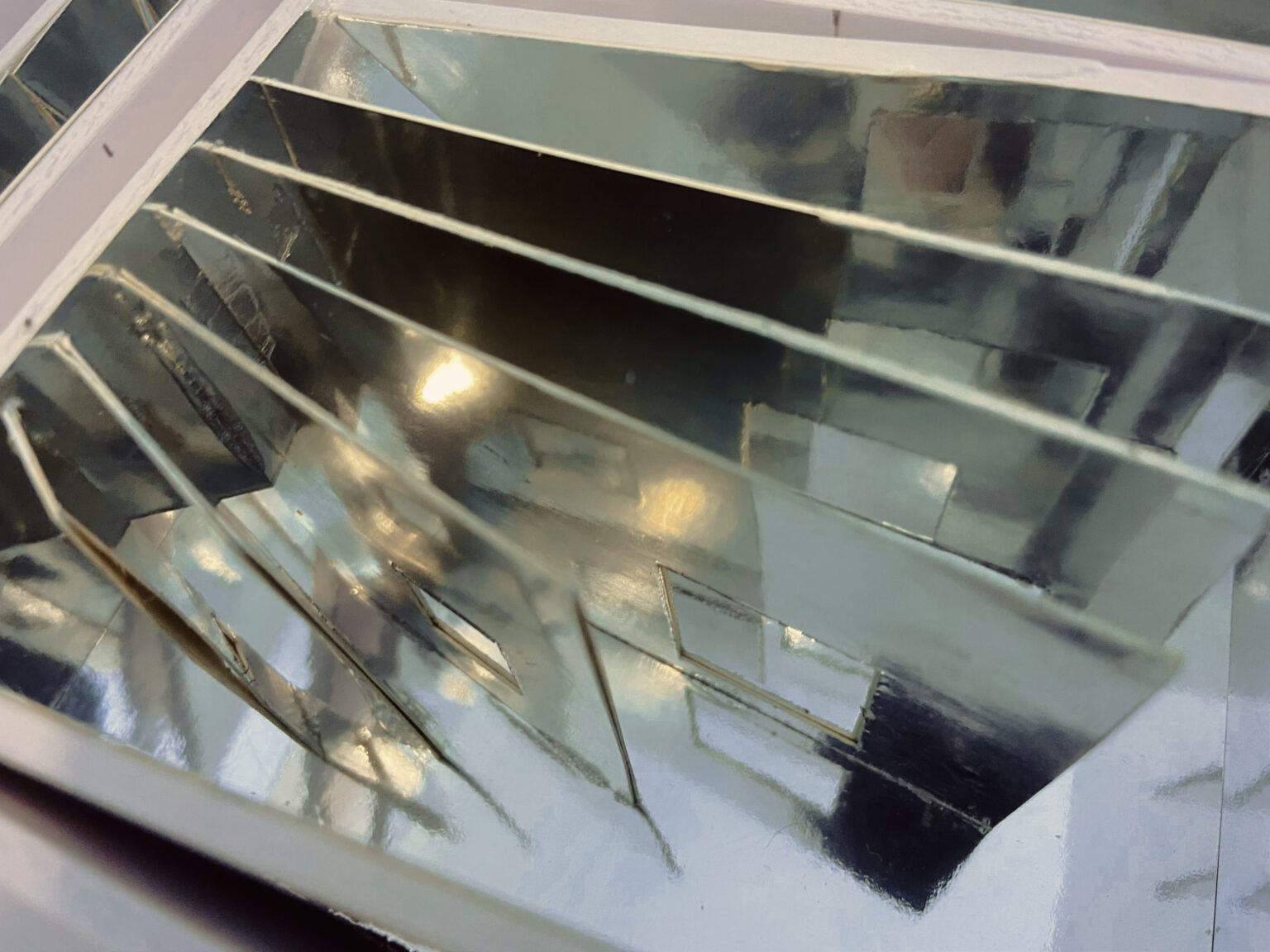 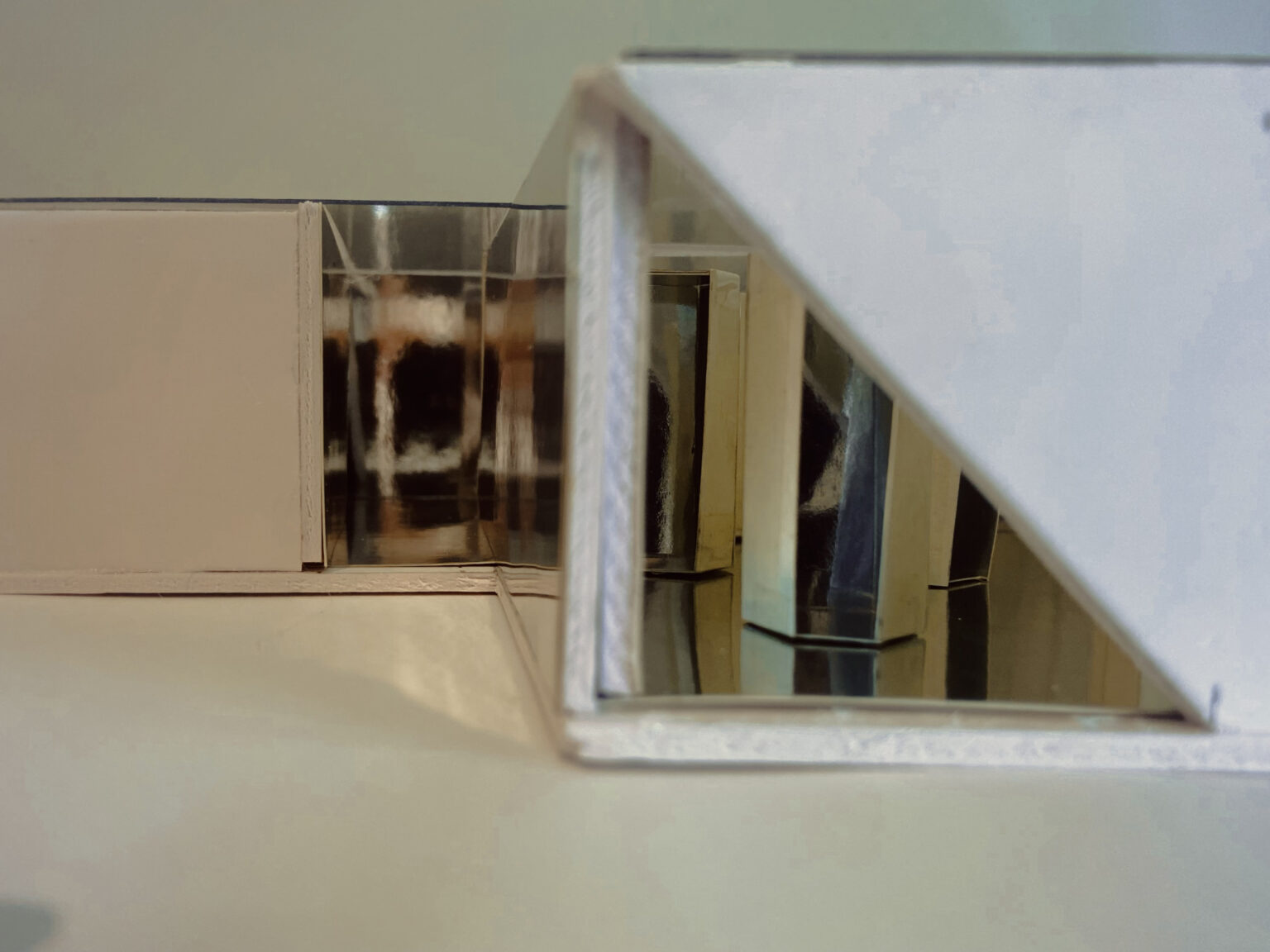